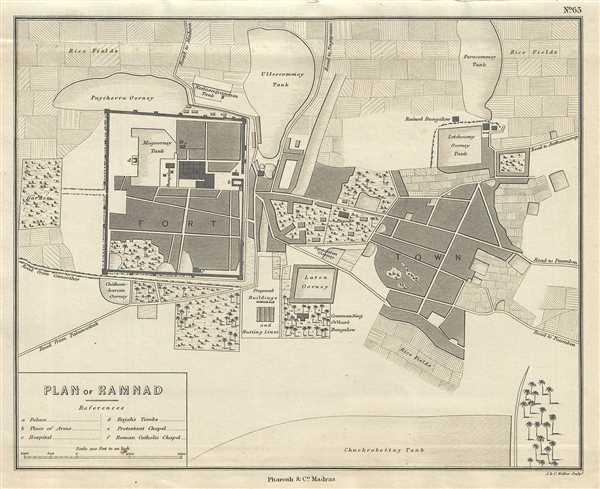 Plan of the town of Ramnad a town near the important Hindu and Muslim pilgrimage centers in southern India.
$200.00

This is a lovely 1854 Pharoah and Company map of the town of Ramnad or Ramanathapuram in the Indian state of Tamil Nadu. Beautifully rendered, the map notes the fort, tanks, rice fields, official buildings, ruins, and other important landmarks from the period. A reference table in the lower left quadrant lists the locations marked within the fort complex, including the Raja’s palace.

Ramnad is close to important Hindu and Muslim pilgrimage centers (Rameswaram, Devipattinam and the Ervadi dargah). The Raja’s Palace is still popular tourist attraction, Although no longer in power, the Raja and his family still occupy the palace.

This map was engraved by J. and C. Walker and issued as plate no. 63 by Pharoah and Company in their 1854 Atlas of Southern India.