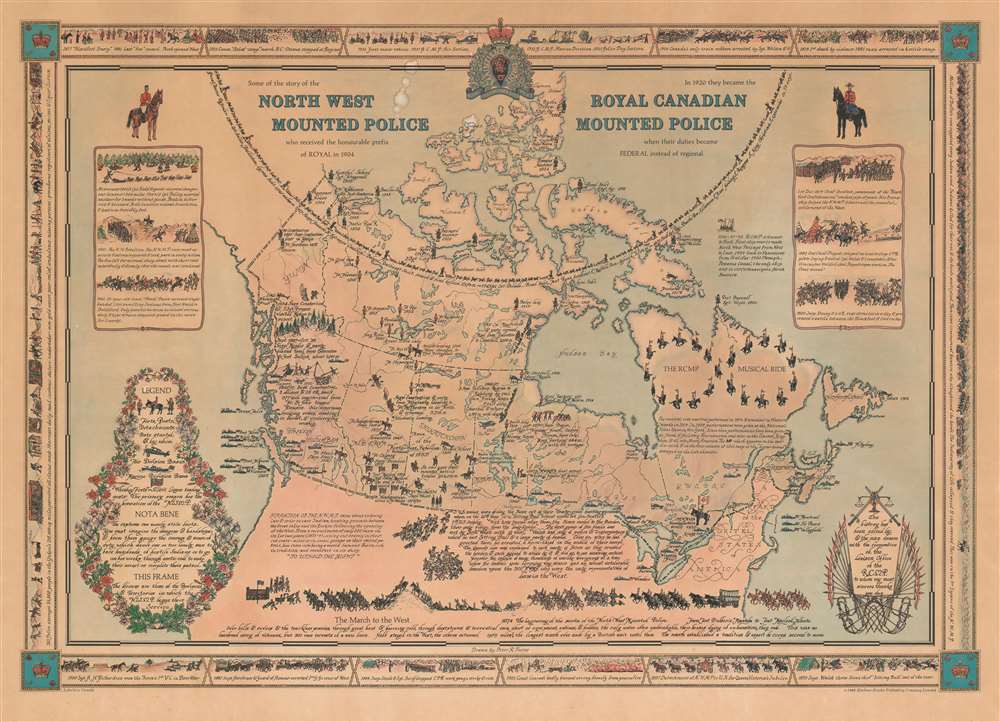 This is an extremely rare 1966 Peter Furse pictorial map of Canada celebrating the history of the Royal Canadian Mounted Police (R.C.M.P.). Forts, posts, and air and marine detachments are identified throughout, and the founding date of each outpost is provided. Numerous historical events are referenced in the captions and many of the officers involved are identified by name. The RCMP Musical Ride is highlighted in Quebec, with the policemen and their mounts creating an infinity symbol, and a short caption provides a concise history of the ride. A longer text presents the early situated in the Northwest United States recounts the formation of the N.W.M.P., while a second text along the U.S.-Canada border tells the story of the Sioux and their flight to western Canada in an attempt to evade the three U.S. armies pursuing them. The column of horses, men, and equipment along the bottom border illustrates 'The March to the West' of 1874 soon after the founding of the Northwest Mounted Police (the forerunner of the R.C.M.P.), which has the distinction of being the longest march made by a British unit up to that time. A pictorial border, consisting of views of historic events in the history of the R.C.M.P. surrounds the central map.

This map was drawn by Peter Reynolds Furse and published by the Maclean-Hunter Publishing Company Limited in 1966. Only one example is catalogued in the OCLC, part of the collection at the University of British Columbia.

Peter Reynolds Furse (October 29, 1901 - 1970) was a Canadian military officer and artist. Bone in Farnham, Hampshire, Surrey, England, Furse entered the Royal Navy at 17 during World War I. He worked as a cartographer, and later graduated from Emmanuel College, University of Cambridge, in 1922. Furse married Barbara Elizabeth Ross on June 25, 1931, and the couple lived in Nairobi, Kenya and Cape Town, South Africa. Furse again served in the Royal Navy during World War II and rose to the rank of Lieutenant Commander. He and Barbara bought How Hoek Farm in Grabouw, Western Cape after World War II. The couple retired to Hampton, New Brunswick, Canada, where Furse became an artist. Learn More...