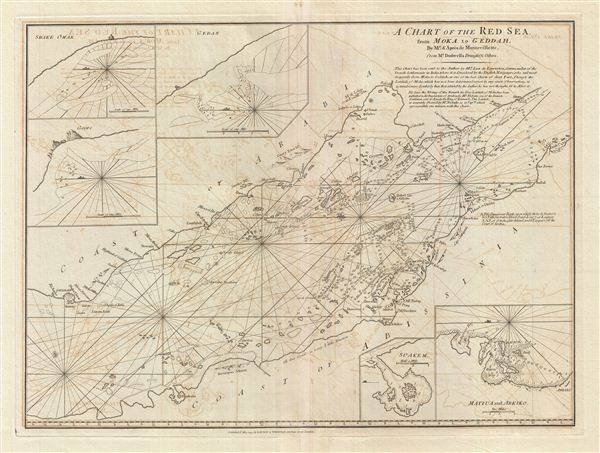 A fine example of Laurie and Whittle's 1794 nautical chart or maritime map of the southern half of the Red Sea, roughly from Mecca (Jeddah, Geddah), to the Bab el Mandeb Strait (Mocha, Yemen and Assab, Eretria). The map is oriented with east at the top. Though important to global trade, a combination of numerous reefs, an unwelcoming coastline, and unpredictable wind patterns restricted mapping and made navigating the Red Sea exceptionally dangerous for sailing vessels. Consequently, the Red Sea was poorly understood dangerous to navigate well into the 19th century, until the rise of steam ships mitigated some of these issues. The general vagary of this map is illustrative of the overall lack of maritime reconnaissance in the region. The southern portions of the Red Sea are nonetheless considerably better mapped than the northern extensions - mostly due to the important pearl fisheries in the Dahlak Archipelago and the dangers associated with the constricted Bab el Mandeb passage.

When this map was issued, the most active maritime trade route in the Red Sea lie between Mocha (Moka) and Geddah. Mocha, today part of Yemen, was the world's largest exporter of coffee and is the source of the modern term 'mocha.' Geddah (Jeddah), further north was and is the maritime gateway for the Islamic Hajj to Mecca.

Insets illustrate Shake Omar, Gedan, Goofs, Suakem (Suakin, Sudan), Matuza (Massawa, Eretria) and Arkiko (Arqiqo, Eretria). A serious of curious annotations in the upper right quadrant offer insight into the history of this chart. It was originally prepared from a manuscript drawn by Mr. Dodwell. It was assumed, post-publication and based upon French reports that the map's situation of the coffee center Moka (Mocha) was off by some 15 minutes. Subsequent explorations by the Danish navigator Niebuhr confirmed that the location of Mocha as presented here is actually correct to within a minute.

This chart is cartographically derived from Jean-Baptiste d'Apres de Mannevillette's similar chart issued for the 1745 Neptune Oriental. It was twice reissued by Sayer and Bennet, and again, in this updated version by Laurie and Whittle, who acquired the Sayer and Bennet printing plates. The present Laurie and Whittle example is notable for several important updates based upon survey work conducted by the Danish navigator Mr. C. Niebuhr in 1762-3.