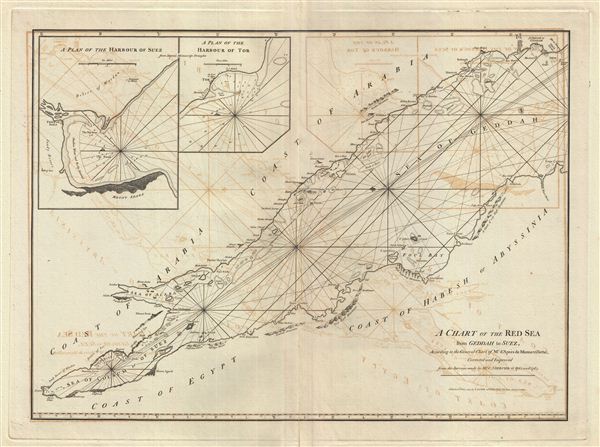 A fine example of Laurie and Whittle's 1794 nautical chart or maritime map of the northern half of the Red Sea, roughly from Mecca (Jeddah, Geddah), to Suez. The map is oriented with east at the top. Though important to global trade, a combination of numerous reefs, an unwelcoming coastline, and unpredictable wind patterns made mapping and navigating the Red Sea exceptionally dangerous for sailing ships. Consequently, the Red Sea was poorly understood and dangerous to navigate well into the 19th century, until the rise of steam powered ships mitigated some of these issues. The general vagary of this map is illustrative of the overall lack of maritime reconnaissance in the region. Soundings are few and far between, being limited to the Sea of Suez. The cities of Aqaba (Acaba), Jordan, and Eilat (Ailah), Israel, are noted, as is the site of Mt. Sinai. The remainder the map is nautically vague with reefs ghosted in, especially along the Arabian coast. Safe anchorages are noted here and there. Inset maps in the upper left quadrant detail the Harbor of Suez and the Harbor of Tor.

This chart is cartographically derived from Jean-Baptiste d'Apres de Mannevillette's similar chart issued for the 1745 Neptune Oriental. It was twice reissued by Sayer and Bennet, and again, in this updated version by Laurie and Whittle, who acquired the Sayer and Bennet printing plates. The present Laurie and Whittle example is notable for several important updates based upon survey work conducted by Danish navigator Mr. C. Niebuhr in 1762-3.