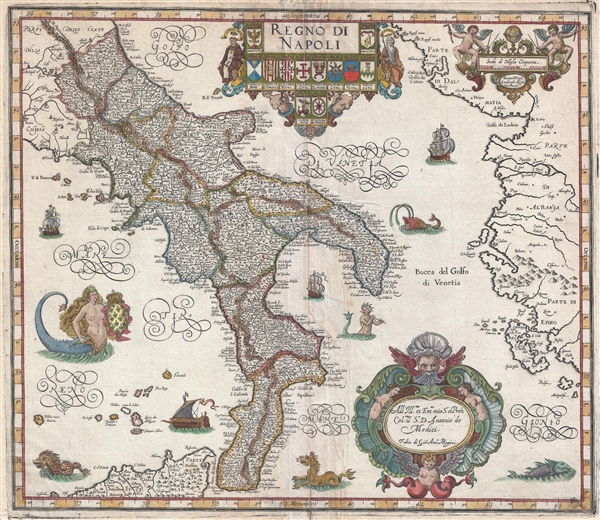 A beautifully engraved 1620 map of southern Italy or the Kingdom of Naples by Giovanni Antonio Magini. Centered on the Gulf of Taranto, this magnificent decorative map covers from Rome northern Sicily and from Rome to Albania, inclusive of al of southern Italy. Sea Monsterds, mermen, sailing ships, and dragons abount throughout. The elaborate title cartouche bears armorial crests for 12 Italian cities.

Magini assembled this chart from various more regional cartographic work including Gastaldi's 1567 map of Publia, Bonifacio's 1587 Abruzzo, and Parisio's 1589 Calabria, Egnatio Danti's Vatican map paintings, and the unpublished atlas of Mario Cartaro and Niccolò Antonio Stigliola, among others. This map was engraved by Benjamin Wright. It was intended as part of Magini's magnificent atlas of Italy, Atlante geografico d'Italia, the first such conceived. Unfortunately, Magini died before his vision could be completed. His son, Fabio published the completed work in its first edition in 1620, three years later.

Giovanni Antonio Magini (June 13, 1555 - February 11, 1617) was an Italian astronomer, astrologer, cartographer, and mathematician. Born in Padua, he completed his studies in philosophy in Bologna in 1579. In 1588 he was chosen over Galileo Galilei as the chair of mathematics at the University of Bologna after the death of Egnatio Danti. Magini was a prolific writer, putting forth theories of celestial motion (he was a supporter of a geocentric solar system), the use of quadrants in surveying and astronomy, and trigonometry. In 1608, Magini produced the first map of Italy to improve on that of Gastaldi: his meticulously researched and beautifully engraved 8-sheet Italia Nuova was hugely influential: upon its publication, Blaeu promptly copied it to produce his own wall map of Italy; the rest of the mapmaking establishment swiftly followed suit. Consequently, virtually every 17th century map of Italy can be identified as a derivative of Magini's monumental achievement. His atlas, Atlante geografico d’Italia, was published posthumously by his son in 1620. This work was intended to include maps of every Italian region with exact nomenclature and historical notes. He also served as court astrologer for the Duke of Mantua. Learn More...

Good. Minor centerfold wear and repair. Minor loss and repair between Merman and Italy just south of the Bay of Taranto with minimal affect on printed area. Original platemark visible.