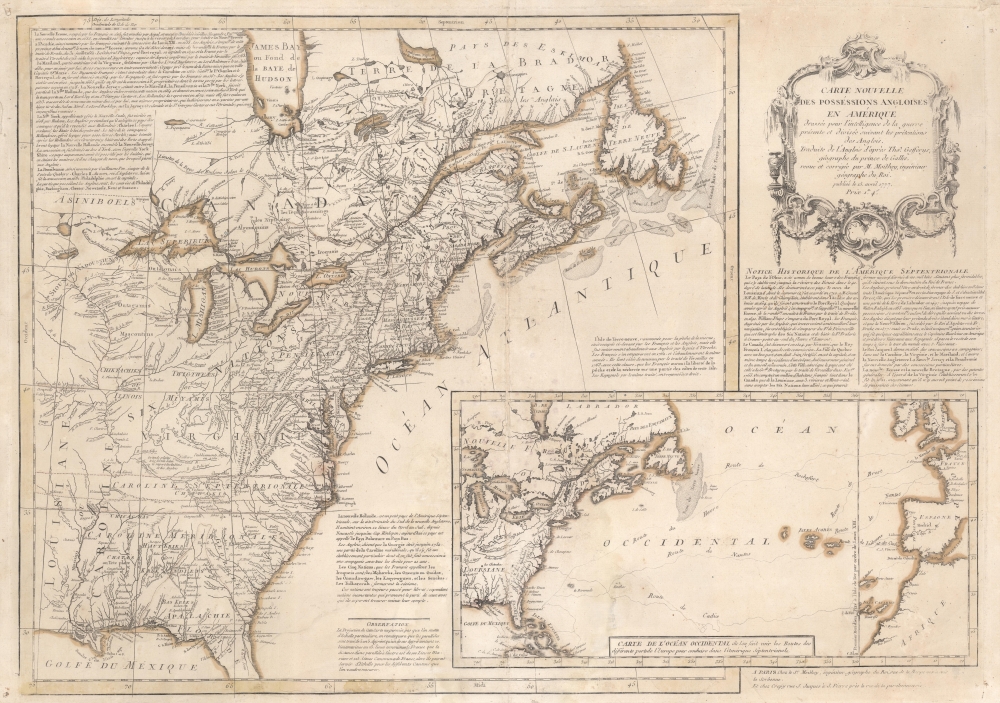 One of the first maps to recognize the American Revolution.
$1,700.00

This is Maurille Antoine Moithey's rare separately issued April 1777 broadside map of the fledgling United States, one of the earliest general maps of the British Colonies to reflect the commencement of the Revolution. Issued in Paris, the map traces events in the early stages of the American Revolutionary War (1775 - 1783) with historical context as far back as the French and Indian War (1754 - 1763). Moithey issued this map to address French interest in the American Revolution - which was riding high at the time. The map predates by several months the 1778 signing of the Treaty of Alliance between France and the emergent United States.

Coverage extends from just west of the Mississippi to the Atlantic Seaboard, and from James Bay to central Florida, thus embracing the North American Theater of War, including the Canadian provinces. There is interesting detail, particularly in the Ohio Valley, where multiple early English forts are named. The map further features extensive textual annotation describing both history and geography. Curiously, some, though not all of the fictional islands in Lake Superior have been removed. An inset in the lower right illustrates the North Atlantic, highlighting maritime routes between French, Spanish, and Portuguese ports and the Americas.

This map as prepared by Maurille Antoine Moithey and engraved in Paris by Jean-Baptiste Crépy. This is the first edition, issued on April 15, 1777. A subsequent edition followed in 1780. Scarce to the market.

Maurille Antoine Moithey (March 24, 1732 - December 12, 1810) was a French mathematician, cartographer, globemaker, game designer, and bookseller active in Paris in the mid to late 18th century. Moithey was born in Paris. He held the post of 'Ingénieur géographe du Roi' and professor of mathematics to the pages of the Prince and Princess of Conti. Throughout his long career as a geographer, he was an ardent spokesman for the 'freedom of the seas', particularly as applied to the English Channel. Learn More...