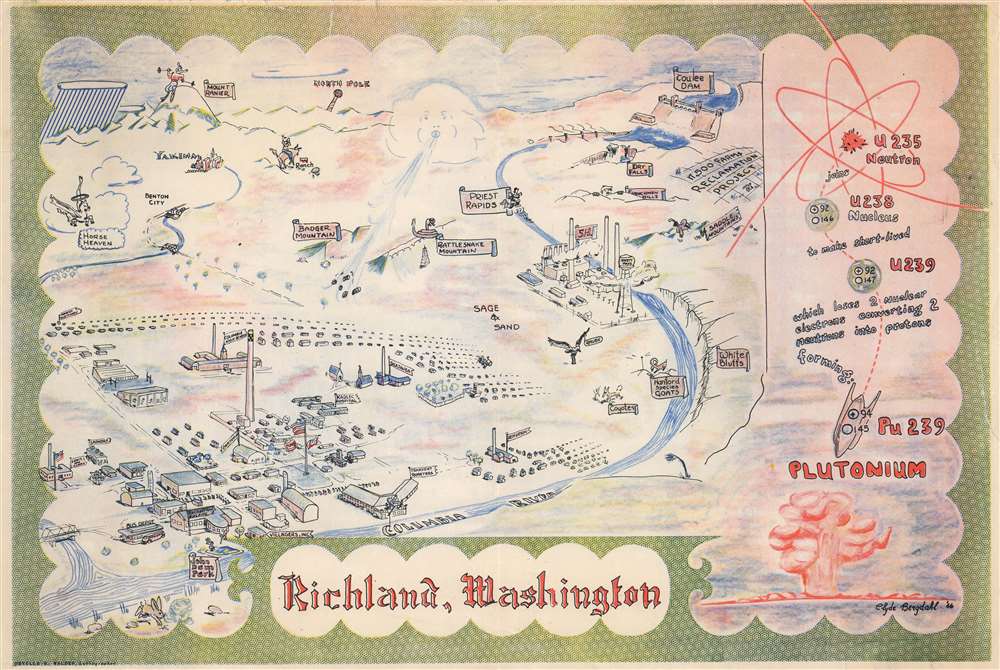 Rare 20th Century Americana. This 1946 Clyde Bergdahl pictorial map of Richland, Washington illustrates the 'Atomic City' between World War II (1939 - 1945) and at the beginning of the Cold War (1947 - 1991). The imagery here is significant in illustrating the remarkable and ephemeral enthusiasm with which American greeted the Atomic Age - which seemed to promise endless free energy and the end to war. During World War II, Richland was established home Hanford Engineer Works plutonium enrichment nuclear facility - a development that greatly expanded the town's population and economic prospects. To facilitate the Hanford Works and is enormous staff, Richland was rebuilt as a model 'American Town'. Prosperous, the local hospital, recreation building, cafeteria, laundry, and grocery are illustrated, along with five schools. Outside Richland, 'B Reactor' appears along the Columbia River. Other landmarks, include Priest Rapids, the Grand Coulee Dam, Mount Rainier, and Yakima. A simplified explanation of how plutonium is formed from uranium occupies the right, with a cheerful mushroom cloud in the lower corner.

The Hanford Engineer Works, also known as the Hanford Site, was established in 1943 as part of the Manhattan Project, a classified research and development initiative that resulted in the creation of the world's first nuclear weapons. The first full-scale plutonium enrichment reactor, 'B Reactor', was built here and provided plutonium for the first nuclear bomb, tested at Trinity Site, New Mexico, and for 'Fat Man', the bomb that destroyed Nagasaki, Japan, ending World War II. The site was greatly expanded during the Cold War, and by 1963 nine nuclear reactors were situated along the Columbia River, along with five processing plants and over 900 radiological laboratories. Most of the site was decommissioned between 1964 and 1971, but 'N Reactor' operated until 1987. 'B Reactor' still stands and is open to the public via guided tours. Today, the site houses the Pacific Northwest National Laboratory, LIGO's Hanford Observatory, the Columbia Generating Station (a commercial nuclear power plant), and a U.S. Navy nuclear Ship-Submarine Recycling Program (dry storage site for sealed reactor sections).

This map was created by Clyde Bergdahl and printed by Orville R. Walden. It is not cataloged in OCLC and we are aware of only one other example in private hands.

Clyde Richard Bergdahl (March 23, 1913 - April 6, 1998) was an engineer and was active in his community. Born in Sand Point, Idaho, Bergdahl was a Boy Scout in his youth and then attended Washington State University. He graduated from Washington State in 1931. He worked for the Austin Construction Company in 1940 and moved to Richland in 1943 when he began working at the Hanford Atomic Project. In the 1950s Bergdahl was active in Civil Defense and other aspects of community life. Bergdahl made at least two maps: a pictorial map of Richland, Washington, and an unpublished map of the St. Lawrence River. He married Elizabeth Maynard Francisco (October 18, 1912 - June 9th, 2016) on November 21, 1940. They were married for fifty-eight years. Learn More...