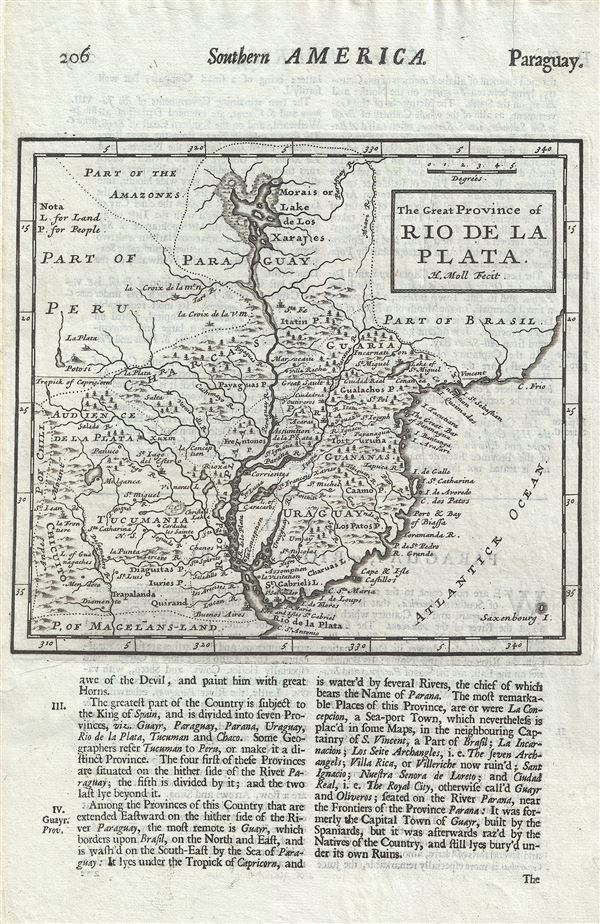 Perhaps the most interesting element of this map is the representation of the apocryphal Lake of Xarayes at the northern terminus of the Paraguay River. 'Xarayes' is a corruption of 'Xaraies' meaning 'Masters of the River.' The Xaraies were an indigenous people occupying what are today parts of Brazil's Matte Grosso and the Pantanal. When Spanish and Portuguese explorers first navigated up the Paraguay River, as always in search of El Dorado, they encountered the vast Pantanal flood plain at the height of its annual inundation. Understandably misinterpreting the flood plain as a gigantic inland sea, they named it after the local inhabitants, the Xaraies. The Laguna de los Xarayes almost immediately began to appear on early maps of the region and, at the same time, almost immediately took on a legendary aspect as the gateway to El Dorado. Later missionaries and chroniclers, particularly Diaz de Guzman, imagined an island in this lake and curiously identified it as an 'Island of Paradise,'

...an island [of the Paraguay River] more than ten leagues [56 km] long, two or three [11-16 km] wide. A very mild land rich in a thousand types of wild fruit, among them grapes, pears and olives: the Indians created plantations throughout, and throughout the year sow and reap with no difference in winter or summer, ... the Indians of that island are of good will and are friends to the Spaniards; Oregon they call them, and they have their ears pierced with wheels of wood ... which occupy the entire hole. They live in round houses, not as a village, but each apart though keep up with each other in much peace and friendship. They called of old this island Land of Paradise for its abundance and wonderful qualities.

This map was issued in Herman Moll's 1701 System of Geography.