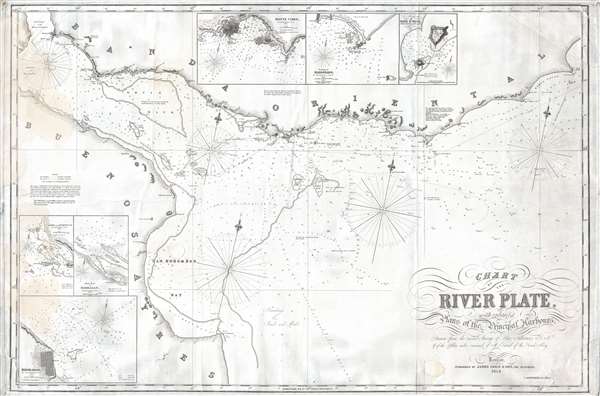 Fantastic chart labeling both Montevideo and Buenos Aires - with insets details both!

This is an 1856 James Imray blueback nautical chart or maritime map of the Río de la Plata in South America. The map depicts the Río de la Plata from Buenos Aires (Buenos Ayres) and the Entrance of the River Parana to Palmarones Island and from the entrance of the Uruguay River to Cape Saint Antonio. A highly detailed chart, this example shows evidence of having been used on board a ship. Both Montevideo and Buenos Aires are labeled, along with numerous other points along the coastline, including several mountains and hills that would be identifiable at sea. Innumerable depth sounding populate the bulk of the chart along with several banks. Hazards to the mariner are clearly marked. Three different compass roses are included. A note along the left border that warns the viewer that the shape of the shoals and depth of water over them is very likely to have changed since the last survey. The final sentence is a cautionary one – stating that 'strangers bound up the river beyond Monte Video ought to obtain a pilot.'

Six different inset maps are included around the border of the chart. These include Colonia and the Hornosi Islands, the Bay of Barragan, Buenos Aires (Buenos Ayres), Montevideo (Monte Video), the road of Maldonado, and the Anchorage of Cape St. Mary. Each of these inset maps includes numerous depth soundings and a detailed depiction of the area in question.

This map was drawn from the recent surveys of Commander Sulivan of the Royal Navy and of the officers under command of M. Barral of the French Navy. It was published by James Imray and Son in 1856.