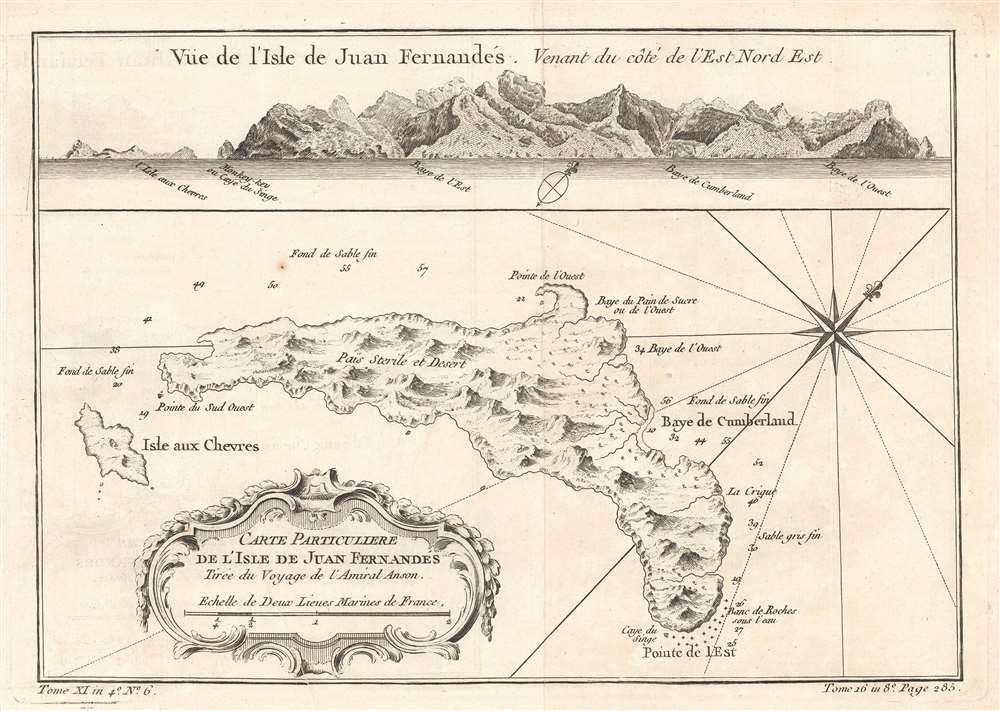 This is a beautifully engraved 1780 map of Juan Fernández island, now officially known as Robinson Crusoe Island, formerly Más a Tierra. It is the second largest of the Juan Fernández Islands. The island was, from 1704 to 1709, home to the marooned sailor Alexander Selkirk, the inspiration for Defoe's Robinson Crusoe (despite the novel's Caribbean setting.) The island was originally named after Juan Fernández, the explorer who first landed there in 1574. The name 'Robinson Crusoe Island' was officially adopted by the Chilean government in the 1960s. Bellin's source for this map postdates Selkirk's ordeal: George Anson's 1740 expedition stopped at the island, resulting in a chart and view.

The separate map appears on the market from time to time but is somewhat neglected in institutional collections: OCLC lists this edition only at the Bayerische Staatsbibliothek and LMU Munchen. La Harpe's Abrégé de l'histoire générale des voyages is well represented in institutions.


Baron George Anson (23 April 1697 - 6 June 1762) was a British commodore and a wealthy noble. Following Anson's aristocratic upbringing on the family estate of Shugborough in Sataffordshire, he joined the British Navy. Anson went through a series of rapid promotions and, in 1737, was given command of a fleet of six ships charged with the mission of attacking Spanish possessions in South America. This mission was ill-equipped and unprepared for the trials ahead. Storms and navigational errors took a heavy toll on the expedition. By the time Anson reached the island of Juan Fernandez his fleet had been diminished to only three ships and his crew reduced to roughly 1/3 of its original strength. Nonetheless, Anson's persistence eventually led to the capture of an immensely rich price, the Spanish treasure galleon Nuestra Senora de Covadonga. The galleon, taken off of Cape Espiritu Santo in 1743 was loaded with silver bullion and, more importantly, charts and maps detailing the routes between Mexico and the Far East used by the Spanish for over 200 years. Knowledge of this route enabled the British navy to disrupt Spanish trade in the Pacific and thus weaken its stranglehold on the Americas. Upon his return to England Anson was hailed as a national hero and made immensely wealthy by his share of the Nuestra's treasure. Anson retired from the Navy for a career in politics and was a Member of Parliament from 1744 to 1747. Anson subsequently continued his naval career with distinction as an administrator, becoming First Lord of the Admiralty (1757-1762). Seven British warships have borne the name HMS Anson in his honor. Anson County, North Carolina, and Ansonborough in Charleston, South Carolina, are also named in Anson's honor. Learn More...