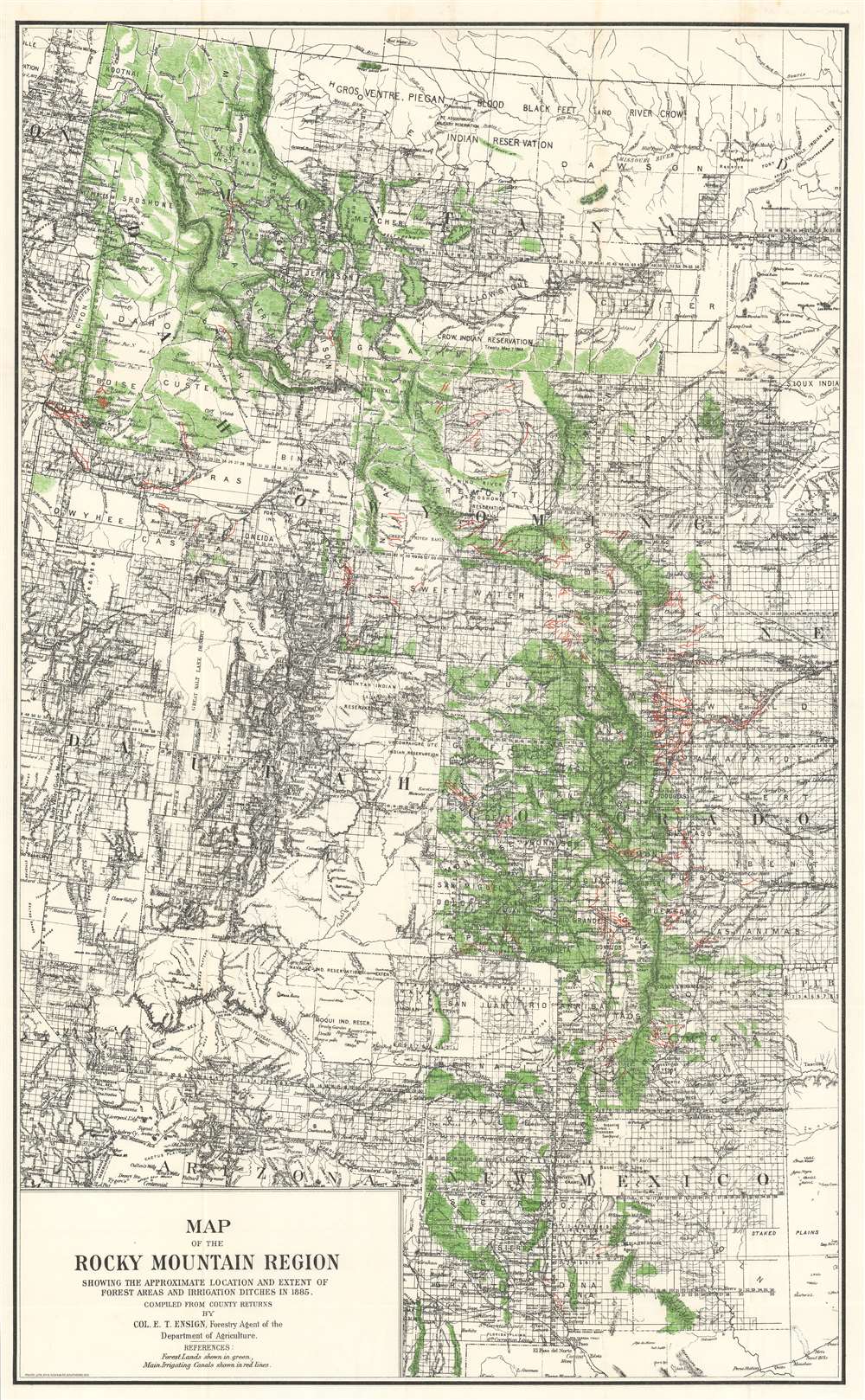 A wonderful map highlighting the forests of the Rocky Mountains.

This is an 1888 Edgar Ensign map of the Rocky Mountain region that highlights forested areas and irrigation ditches. The forests are shaded green, allowing the viewer an overall view of the of the distribution of forested land from the Canadian border south to Texas. The small red lines present throughout mark irrigation ditches, with a particular concentration appearing the watershed draining into the South Platte River in Colorado. Counties are labeled throughout, as are numerous cities and towns. The township grid of the Public Land Survey System, complete with numbers for the townships and ranges, covers the majority of the map, with exceptions including heavily mountainous terrain, national parks, and Indian reservations.

Edgar Tarbell Ensign (September 9, 1839 - February 15, 1918) was an American banker, lawyer, forester, and public servant. Born in Moriah, New York, Tarbell attended the local district school and village academy before entering a boy's private school in Sarasota Springs, New York. He moved to Des Moines, Iowa in 1856, where he found a job in the banking house of A.J. Stearns and Company, and his parents joined him in Des Moines three years later. While still living in Iowa, Ensign was appointed deputy state treasurer in 1858. After the outbreak of the American Civil War, Ensign volunteered for the Second Iowa Volunteer Infantry and enlisted on May 4, 1861, when he was commissioned as a second lieutenant. Ensign served in the Union Army until the end of the war, eventually reaching the rank of brevet colonel. He was wounded only once during his service at the Battle of Fort Donelson, Tennessee. After the war, Ensign attended the Iowa Law School, from which he received his LL. B. and A. B. Degrees, and also received an LL. B. Degree from Columbian College, which would eventually be merged with George Washington University. He was admitted to the Iowa bar in 1868 and opened a law practice in Des Moines. He was appointed district attorney that same year. Ensign lived in Des Moines until 1874, when he moved west to Colorado Springs. Once there, he opened another law office and soon after his arrival was appointed commissioner of the United States circuit court. He served as the Colorado State Forest Commissioner from 1883 until 1889. He spent a further two years as a special agent of the United States General Land Office working on setting up forest reserves, which would eventually become known as national forests. He helped organize the Assurance Savings and Loan Association in 1895, and served as its president until September 1917. He also tried his hand at banking, as he was one of the organizers of the First National Bank of Colorado City and the National Bank Building Company. He also served a three year term as president of First National. He married Lilla Butin on October 17, 1872 in Des Moines, After his death, the Memoriam of the Military Order of the Loyal Legion, of which he was a member, stated, 'The life career of Colonel Ensign as a gentleman, a soldier, and a friend is worthy of emulation by all.' Ensign died on February 15, 1918 in Colorado Springs. Learn More...