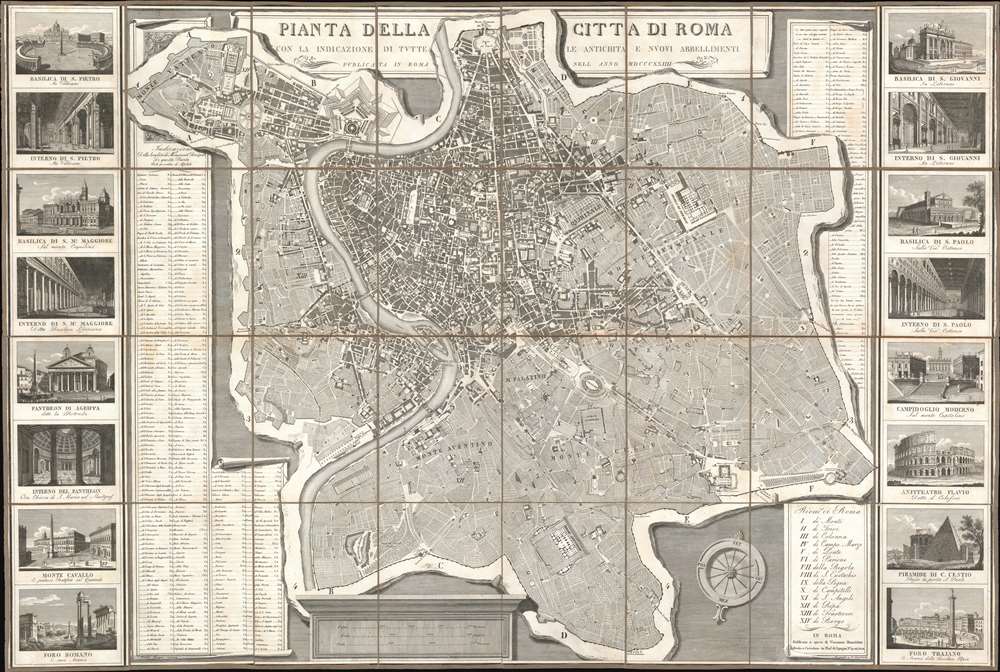 A beautifully engraved case map highlighting all of Rome ancient and modern sites.
$2,200.00

This is an 1824 Pietro Ruga folding city map or plan of Rome, Italy. The map depicts Rome from the Vatican to the Basilica of the Holy Cross in Jerusalem (Bas. di S. Croce in Gerusaleme) and from Piazza del Popolo to the San Sebastiano Gate. A wonderfully detailed masterpiece, Ruga's map traces the streets of Rome that remain mostly unchanged today. An ichnographic plan, the Colosseum, the Baths of Caracalla, and the Pantheon are among the ancient sites illustrated as horizontal cross-sections, allowing the viewer to see their floorplans. Numerous churches and basilicas, including St. Peter's in Vatican City, are shown in this way as well. All fourteen of Rome's rioni are identified by Roman numerals and correspond with an index situated in the lower right corner. An index of the city's monuments is included as well and is so extensive that it occupied part of both the left and right sides. Sixteen detailed views of some of these monuments appear on the left and right borders. Ruga selected a mix of ancient and modern sites, including St. Peter's Basilica, the Pantheon of Agrippa, the Roman Forum, the Colosseum, and the Basilica of St. Paul.

This map was created by Pietro Ruga and published by Venanzio Monaldini in 1824. Several editions of this map were published beginning in 1818 through at least the late 1840s, most likely for the well-educated traveler visiting Rome on the Grand Tour.

Pietro Ruga (c. 1772 - 1850) was an Italian engraver, printmaker, furniture designer, and architectural draftsman active in Rome during the late 18th and early 19th centuries. Ruga was born in Rome, Italy. He is best known today for his architectural views of Italian, in particular Roman, monuments, furnishings, and antiquities. There are only two maps attributed to Ruga, both tourist pocket plans of Rome, dating to the 1820s. Pietro Ruga the engraver should not be confused with Pietro Ruga Romano, who lived in Rome at the same time and taught civil law at the Sapienza.


Venanzio Monaldini (fl. c. 1765 - 1849) was a late 18th and early 19th century bookseller, book publisher, and map publisher based in Rome, Italy. His work appears as early as the 1760s and as late as 1849. It is unfortunately unclear if his opus represents a single individual or an an ongoing family enterprise. Monaldini's publications focused on maps and guides intended for the Grand Tour set, many of which he published in English. Monaldini, along with Arthur John Strutt, also published the weekly Roman Advertiser: Journal of Science, Literature and the Fine Arts from October 24, 1846 to April 21,1849. The bookshop, Venanzio Monaldini Librario e Cartolaro, was located on Piazza de Spanga no. 79, just opposite the Spanish Steps, Rome, Italy.