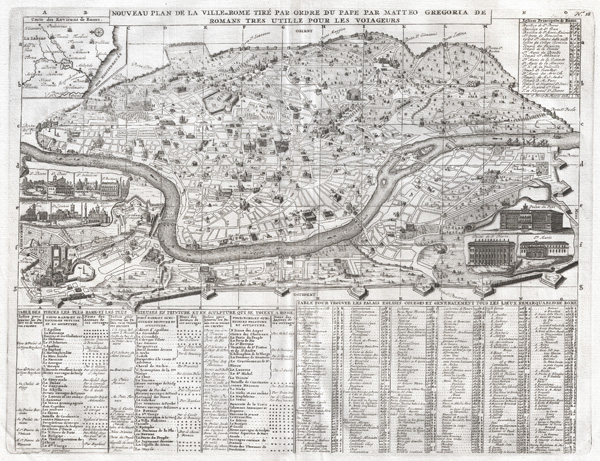 A highly detailed 1721 map of Rome and a splendid example of Henri Chatelain's magnificent engraving. Covers the walled center of Rome on either side of the Tiber from the Porta del Popolo to the Porta St. Paola. Shows major streets with important buildings, including the Vatican, Coliseum, Pantheon, and numerous other monuments drawn in profile. The lower quadrants of the map are occupied by extensive tabular data relating to various constructions and the history of Rome. There are ten inset views showing important Roman buildings, these include: St. Pierre, St. Paul, St. Sebastian, St. Bastiane, St. Crois de Jerusalem, St. Lorenzo and St. Marie Maggior, the Palaise du Pape, the Palais de St. Pierre, and St. Marie. A further inset map in the upper left quadrant shows Rome's situation relative to nearby cities and the Mediterranean. Engraved by Henri de Chatelain for volume 1 of the 1721 issue of theAtlas Historique.

Very good. Original centerfold. Pressmark visible. Blank on verso.
Looking for a high-resolution scan of this?