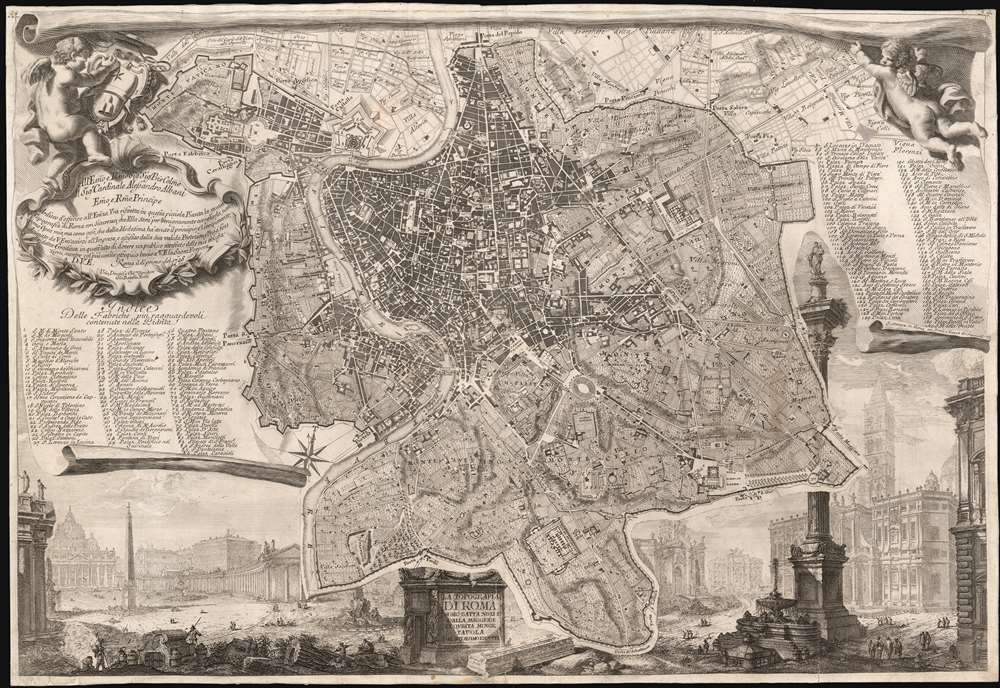 This is a 1748 Giambattista Nolli city plan or map of Rome, Italy, in its single-sheet reduced format state, engraved both by the mapmaker and Giovanni Battista Piranesi. Nolli's magnum opus, the twelve-sheet La Nuova Pianta Di Roma, was printed that same year and typically bound together with two single-sheet maps: one, a retrospective showing Rome during the Classical era, and this beautifully engraved plan intended to present the grander work in synopsis.

Nolli's wall map ranks among the best plans ever produced of any city. It was the first plan of Rome produced on scientific, geodesic principles. It presents the city in astonishing detail from the Villa Pamphili to the Tempio di Venere e Cupido and from the Vatican to the Porta San Sebastiano. Commissioned by Pope Benedict XIV contextualize the formal demarcations between Rome's fourteen Rioni (traditional districts dating to the 12th century), Nolli's plan was impressive not only for its scale and accuracy, but because it is an ichnographic plan - showing the true dimensions of the city's structures, walls, columns, doorways, interior passages, and even staircases in minute detail. It has even been recognized that Nolli, with an incredible degree of accuracy, was able to capture the asymmetry of the Spanish Steps. This smaller plan necessarily loses some of the incredible detail of its larger sibling, but the masterful engraving nevertheless achieves great detail, and Piranesi's superb architectural views in the lower corners sets this piece among the most desirable printed depictions of the Eternal City.

This map was created by Nolli and Piranesi to accompany bound editions of Nolli's multi-sheet map in 1748. The bound volume of the wall map is well represented in institutional collections. Separate examples of this single sheet appear in a handful of OCLC entries, and it appears on the market from time to time.

Giambattista Nolli (April 9, 1701 – July 1, 1756) was an Italian cartographer and architect w active in the first half of the 18th century. Born in Como, Nolli moved to Rome under the patronage of the Albani and Corsini families. Most famous as the cartographer of his iconic 1748 plan of Rome, Nolli's architectural projects included work on the churches of Sant'Alessio on the Aventine Hill (1743) and Santa Dorotea in Trastevere (1751–1756). Learn More...


Giovanni Battista Piranesi (October 4, 1720 - November 9, 1778) was an Italian artist famous for his etchings of Rome and fictitious ‘prisons’. He was born in Mogliano Veneto, which was part of the Republic of Venice. He learned his trade (Piranesi considered himself an architect) from his father, a stonemason and master builder, his uncle, who taught him structural and hydraulic engineering, an his brother, a Carthusian monk, who inspired Piranesi’s fascination with history and the ancient Romans.

Piranesi is also celebrated for his series known as The Prisons (Carceri d’invenzione, ‘Imaginary Prisons’). These are fantastic, labyrinthine structures of epic proportions. He began working on the series in 1745, and the first state prints, which included fourteen etchings, were published in 1750 and were untitled and unnumbered. The second publishing in 1761 was formatted differently. This series included sixteen etchings, all of this were reworked and numbered I-XVI (1-16). Numbers II and V were new to the series. Though the series remained untitled, each of the sixteen etchings now is attached to a ‘conventional’ title. Learn More...