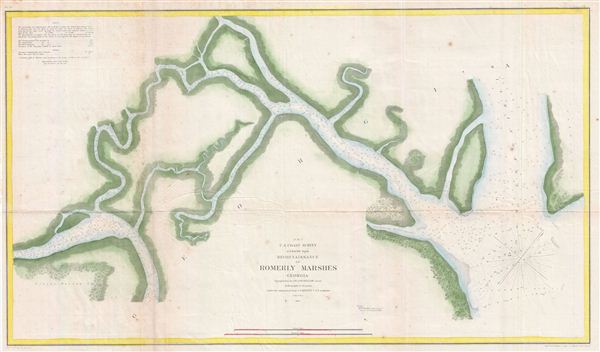 An uncommon 1855 nautical chart or maritime map of the Romerly Marshes, Georgia. Romerly Marsh is a popular hunting and fishing area just south of Savannah, Georgia. In the 1850s Romerly Marsh was particularly difficult to navigate due to its 'excessive crookedness' and 'sharp bends.' Drawn on a scale of 1:10,000. The triangulation for this chart was completed by A. W. Longfellow, a nephew of the famous poet. The Hydrography was accomplished by a party under the command of J. N. Maffitt. The whole was compiled under the exacting direction of A. D. Bache, Superintendent of the Coast Survey.