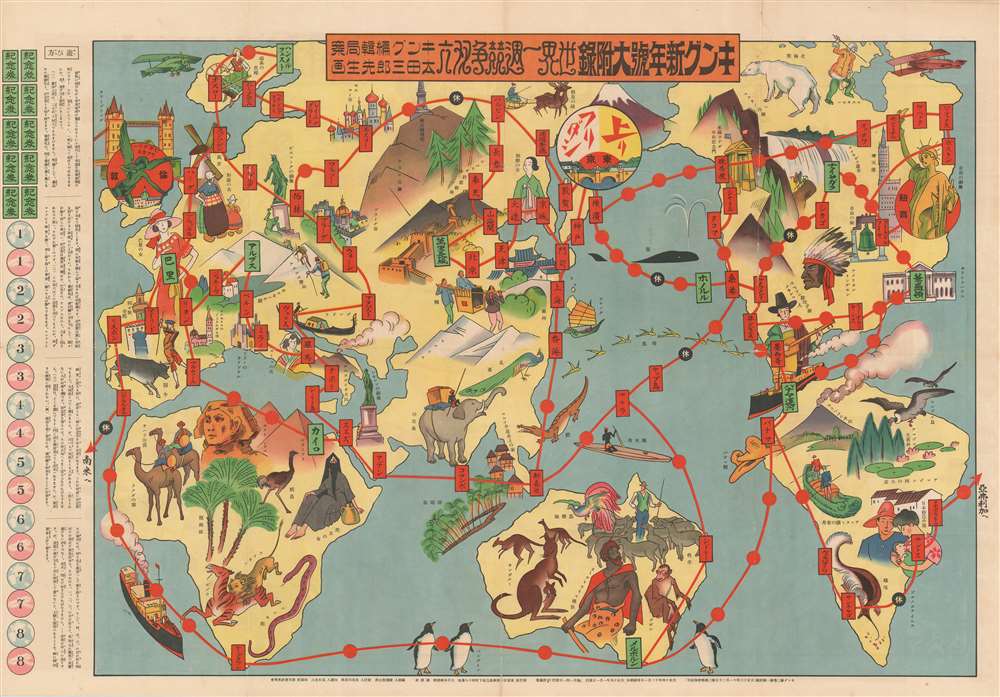 Japan meets the world - an influence for the development of western pictorial cartography.

A scarce 1926 Japanese 'round the world' sugoroku game and pictorial map of the world by Saburo Ota (太田三郎). The game board takes the form of an allegorical map of the world centered on Japan. The continents are amorphous but recognizable. Vignette illustrations throughout depicts cultural figures, architectural wonders, flora, fauna, and Japanese people engaging with the world. Three cities are specifically highlighted, Tokyo which acts as the starting point or furi-dashi), and New York and London, servings as optional endpoints or agari. The verso features an image of a 'family athletic meet.'

Japan Finds a Place on the Global Stage

This map illustrates Japan's emergence from an insular feudal nation to a rising power on the world's social, military, and economic stage. The arrival of Commodore Perry and forced opening of Japan in 1853 transformed Japan's vision of itself, breaking the illusion that it was the sole repository of civilization, and underscoring the truth that it was indeed well behind western powers. What followed was the Meiji Restoration, a major reorganization of government, a reassertion of imperial power, and a drive towards aggressive industrial and social modernization. Japan's victory over Imperial Russia in the Russo-Japanese War (1904 - 1905) marked the first major victory in war by an Asian power over a European Power, an achievement that established Japan as a global power.

This map, embraced in the colorful format of a game, places the Japanese on the world stage. It was made for the youth of Japan an encourages them to think of themselves as part of increasingly global culture, capable of traveling migrating, and interreacting as social equals anywhere. A Japanese woman here shops for fashion in Paris, and a Japanese family emigrates to South America, representing a wave of immigration that would soon become a powerful political force.

This and other Japanese maps of the period had a significant influence on the development of pictorial cartography in England, France, and the United States in the first half of the 20th century. Although Western pictorial cartographer, such as the 1914 Wonderground Map of London, did develop independently, later work, it exhibited a cartoonish quality not present here. This map is more reminiscent of the sophisticated pictorial map that the French commercial illustrator Lucian Boucher would product for Air France nearly 30 years later. Boucher's work a clear resemblance to this map in terms of style, design, and substance. Although very little has been written about the influence of Japanese manga - as here - the rise of pictorial and commercial cartography in the west, the connection here is recognizably linear.

The essence of the game, generally known as simplified sugoroku, is akin to the western board game, snakes and ladders. Historically there are two variants of sugoroku, one that is similar to backgammon, and the presently offered 'snakes and ladders' variant. This version of the game appeared as early as the 13th century, and was popularized by the rise of printing technology, especially in the Edo and Meiji periods, leading to the production of high-quality visually-arresting gameboards. A standard sugoroku board has a starting point, the furi-dashi, and a winding or spiral path terminating at the agari or finish-line. The gameplay itself, not unlike 'snakes and ladders,' is a race to the finish.'

This map was published in Japan in on New Years Day, 1926 or Taisho 15, the final year of the Emperor Taishō's reign. It was drawn by Saburo Ota (太田三郎) and published by Dai Nippon Odankai Kodansha (式会社講談社). It was issued as a supplement to the magazine, Kingu キング (vol.2, no.1).

Saburo Ota (太田三郎, December 24, 1884 - May 1, 1969) was a Japanese painter and commercial illustrator active in the first half of the 20th century. Ota was born in Aichi Prefecture. He studied both Western, under Kuroda Seiki (黒田清輝, 1866 - 1924), and traditional Japanese, under Terasake Hiromi (寺崎広業, 1866 - 1919), painting styles. He then traveled extensively in the 1920s, where he was influenced by the cubist and fauvist movements. He worked as an illustrator under the name Yanagi Kimishima (君島柳三) Learn More...

Good. Minor verso repairs on a few old fold spits. Wear on old fold lines.
Looking for a high-resolution scan of this?