1926 Japanese Round the World Pictorial Map and Sugoroku Gameboard 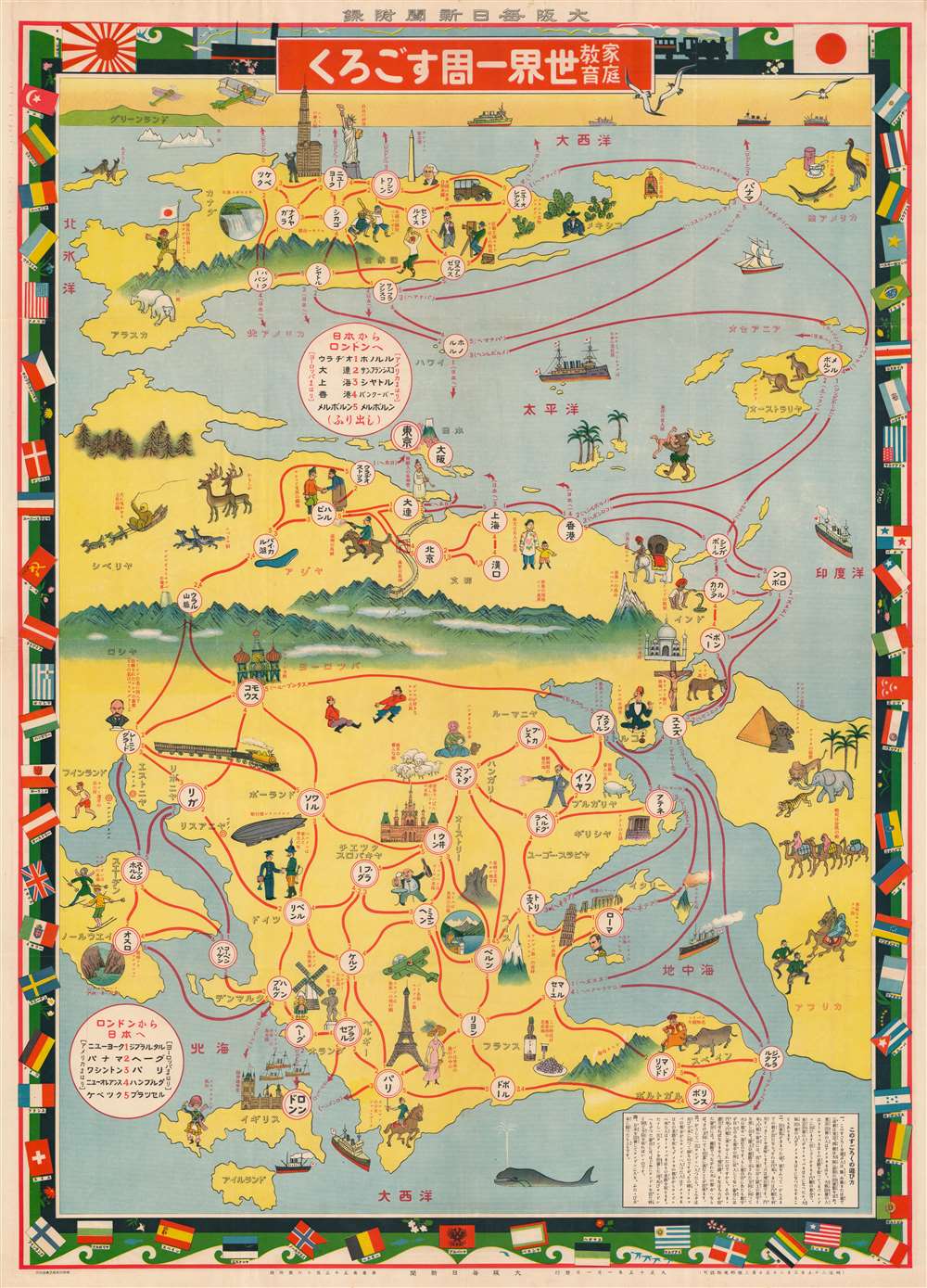 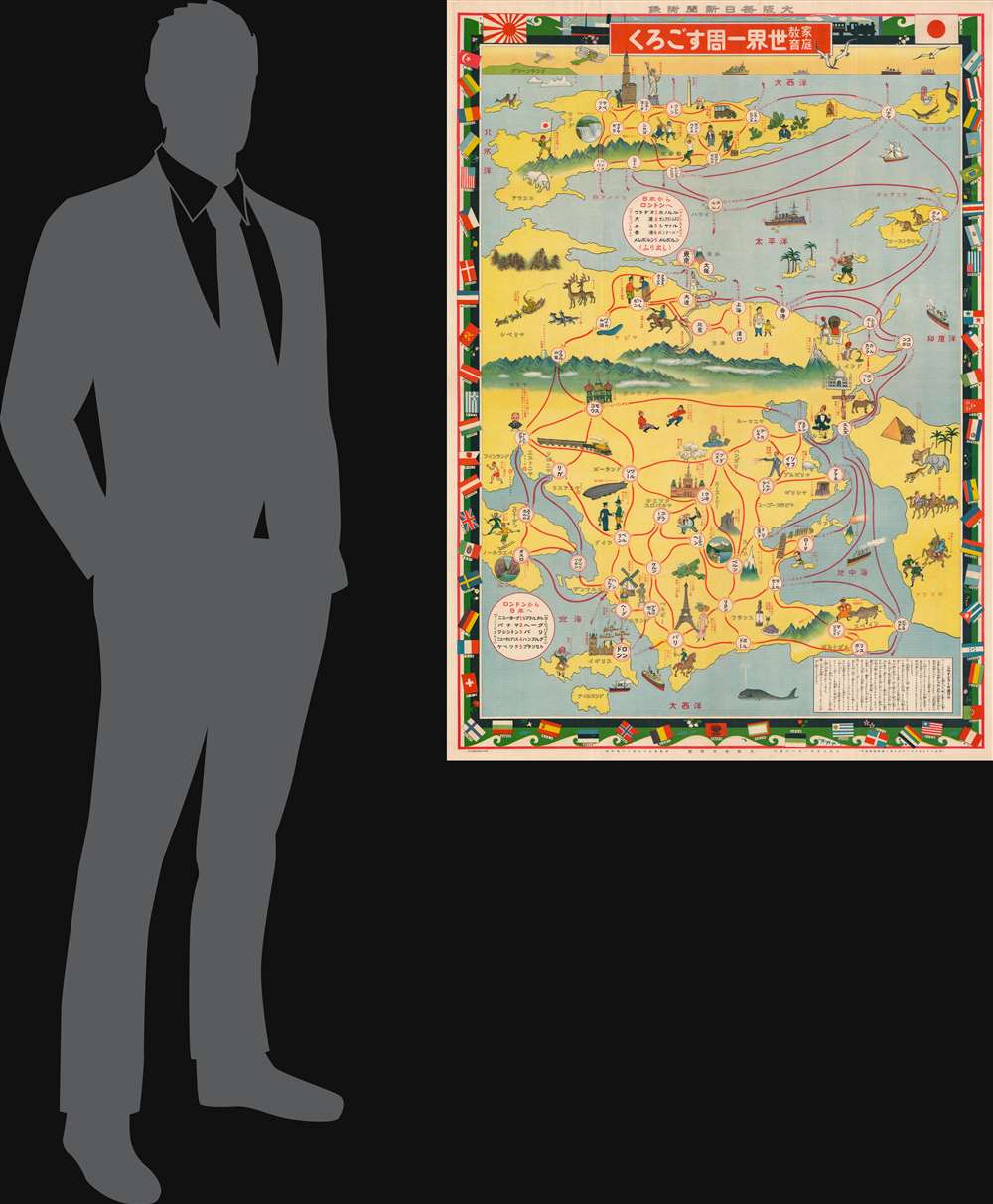 1926 Japanese Round the World Pictorial Map and Sugoroku Gameboard

Charming pictorial map of the world, with illustrations of cannibalism.
$750.00

This is an exceptionally charming Taisho 15 or 1926 Japanese pictorial world map and round-the-world sugoroku game published as a supplement to the New Year's Edition of the Osaka Mainichi Shimbun (大阪毎日新聞). Aside from entertainment, the game was meant to inculcate geographic knowledge, especially of Europe and North America.

The map is intended for sugoroku, more specifically e-sugoroku (繪双六). It is common to play sugoroku on New Year's Day (traditionally the first day of the lunar new year but in the Meiji era and since on January 1), thus why this board was included in the New Year's edition of the Osaka Mainichi Shimbun.

Historically there are two variants of sugoroku, one that is similar to backgammon, and the present 'snakes and ladders' variant. This version of the game appeared as early as the 13th century, and was popularized by the rise of printing technology, especially in the Edo and Meiji periods, leading to the production of high-quality visually-arresting gameboards. A standard sugoroku board has a starting point, the furi-dashi, and a winding or spiral path terminating at the agari or finish-line. The gameplay itself, not unlike 'snakes and ladders,' is a race to the finish. Many sugoroku had an educational or didactic purpose and were geared towards inculcating patriotism and good morals in children. Aside from geography, the flags of major countries of the world surround the board, with the Japanese military flag at top-left and national flag at top-right.

In this case the furi-dashi is Japan and the agari is London. The player(s) must take one of two routes - one leaving from Tokyo and traveling through the Americas, the other leaving from Osaka and traveling through Eurasia – and return to Japan using the other route, thus completing the trip around the world. A box at bottom-right explains the rules of the game, including the means by which players can travel (automobile, boat, and airplane).

The cartoons are generally self-explanatory, but a few deserve some clarification. The figure holding a Japanese flag in the Canadian Rockies is Maki Yūkō (槇有恒), the most accomplished Japanese mountain climber of the time. Next to the bust of Lenin is an explanation that the name of the city was recently changed from Petrograd to Leningrad (yet, throughout the board, 'Russia' ロシア is used instead of 'Soviet Union'). The angry-looking fellow wielding a gun in Southeastern Europe is meant to be Gavrilo Princip, assassin of Archduke Franz Ferdinand. Two European soldiers confronting a horseback warrior in North Africa is a reference to the Rif War, where French and Spanish forces fought a brutal counter-insurgency against Berbers in the Rif Mountains of Morocco. The depiction of cannibalism by a New Guinea tribesman was nearly ubiquitous in Japanese illustrated world maps of this era meant for children, part of a growing fascination with Nanyō (Southeast Asia and the South Pacific).

This map was published as a supplement to the New Year's Edition of the Osaka Mainichi Shimbun (大阪毎日新聞) on January 1, 1926. It was printed by the Seiban Printing Co. (精版印刷株式會社). The only known institutional holdings of the map are with the National Library of Australia, the Cotsen Children's Library at Princeton University, the Nichibunken (International Research Center for Japanese Studies), and the Fukui Prefectural Archives.