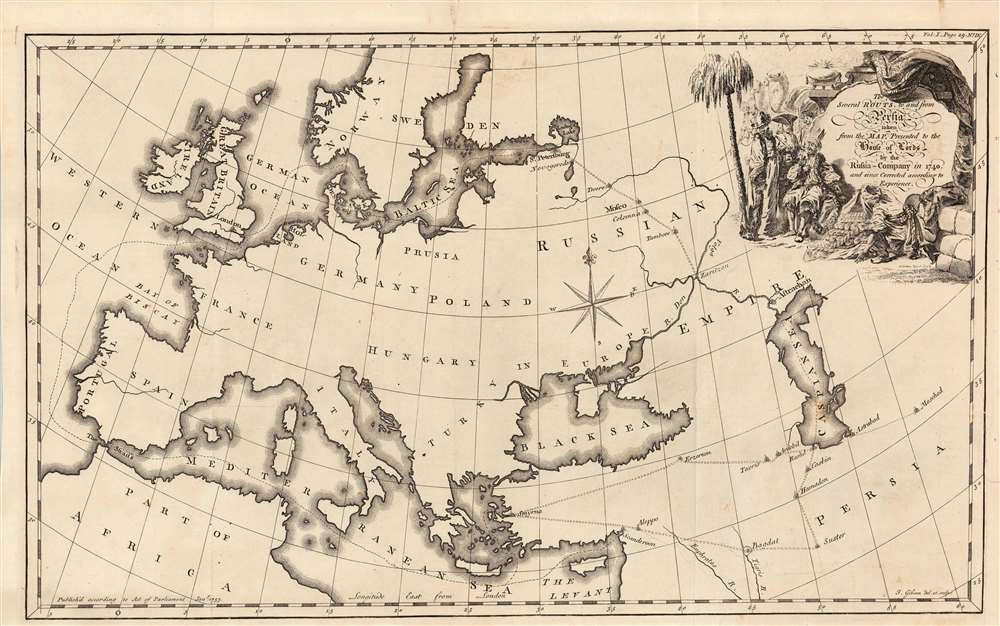 Trade routes between London and Persia.
$450.00

This elegant 1753 Jonas Hanway map of Europe and the Near East illustrates the trade routes of British Russia Company, as proposed to the House of Lords in 1740. It was engraved in 1753 by John Gibson to accompany Jonas Hanway's account of his journey from Russia to Persia. Although not himself a company member, the merchant Hanway entered into partnership with member Robert Dingley (1710 - 1780). Thus, Hanway's routes taken in his 1743 journey hewed closely to the northern one proposed here. This route ran by sea to St. Petersburg and then by land to Tsaritsyn, Astrakhan and the Caspian Region. A southern route was also presented, from London via the Mediterranean to Syrma, and then to Persia via Asia Minor.

Overshadowed by the sprawling British East India Company, the Russia Company was an extremely successful but surprisingly obscure mid-18th century joint-stock trading venture. Despite its imports into Britain rivaling those of the East India Company, the obscurity of its membership and political influence have led to the Company being ill understood by historians. The trade venture was fruitful: for example, Jonas Hanway made his fortune in partnership with Russia Company member Robert Dingley, thereafter exercising his wealth as a philanthropist. But the Company also furthered Britains strategic interests both in the Baltic, and began laying the foundations for the extension of British power in Central Asia.

Gibson's engraving is beautifully executed, embellished with a fine compass rose and a dramatic, exotic cartouche, showing European merchants conversing with an Eastern potentate seated beside bales of silks.

The map was engraved by John Gibson in 1753 for inclusion in Jonas Hanway's An Historical Account of the British Trade over the Caspian Sea. We are aware of three editions of the work; this example appeared in the third. It is distinguishable from the early editions only by the typeset pagination in the upper border. We see eight examples of the complete work in institutional collections. We see only two examples of this map catalogued in OCLC, in the 1753 and 1754 issues respectively, at the National Libraries of Israel and Scotland.