1753 Vaugondy Map of England and Wales 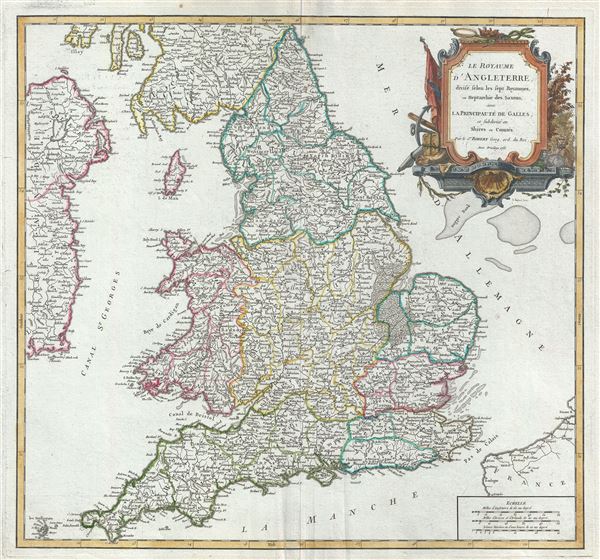 1753 Vaugondy Map of England and Wales

This is a scarce 1753 map of England and Wales by Robert de Vaugondy. It extends from Scotland south to the English Channel to include all of England and Wales, with parts of Scotland and Ireland. The Isle of Man is included. Vaugondy compiled this map to depict the seven ancient Heterarchies of the Saxons as well as the more modern shires or counties. Several important towns, cities, roads, rivers, lakes and other topographical features are noted. This map also offers splendid detail throughout with respect to undersea shoals and reefs in the surrounding waters.

The collective Anglo-Saxon Kingdoms of the south, east and central England existed during the Late Antiquity and Early Middle Ages and would eventually unify to form the Kingdom of England during the 10th century. These seven kingdoms or The Heptarchy including Westsex (Wessex), Sussex, Kent, Essex, East Angles (East Anglia), Mercie (Mercia) and Northumberland (Northumbria) are identified here with outline color. Counties or Shires within these are also noted.

A highly decorative title cartouche by E. Haussard fecit. appears in the top left quadrant. Drawn by Robert de Vaugondy in 1754 and published in the 1757 issue of his Atlas Universal. The Atlas Universal was one of the first atlases based upon actual surveys. Therefore, this map is highly accurate (for the period) and has most contemporary town names correct, though historic names are, in many cases, incorrect or omitted.

Rumsey 3353.016. Pedley, Mary Sponberg Belle et Utile: The Work of the Robert de Vaugondy Family of Mapmakers, 48.
Looking for a high-resolution scan of this?