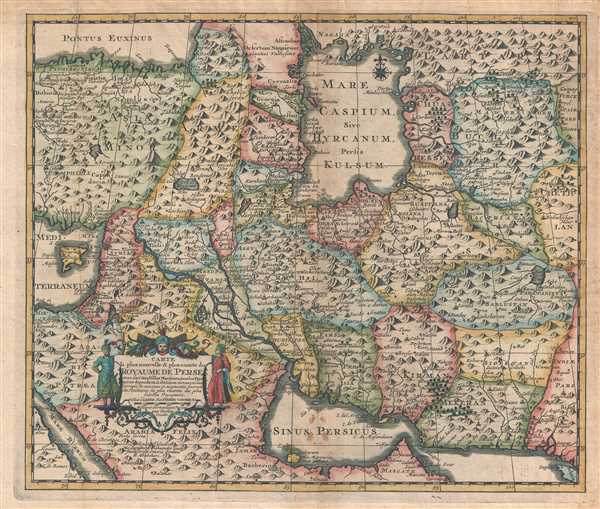 This is a hand colored 1719 Pieter van der Aa map of the Middle East and Iran. The map depicts from the Black Sea and the Caspian Sea to the Persian Gulf and the Red Sea and from the Mediterranean Sea and Turkey to Central Asia. Highly detailed, Van der Aa declares that the map was created using information provided by the most recent and most diligent travelers. Divided into numerous different states, an idea of the regional divisions is conveyed. Parthia, Mesopotamia, Syria, Asia Minor, three different Arabian states, and Egypt are among those labeled. The Persian Gulf (Sinus Persicus) and the Red Sea (Mare Rubrum) are focal points, along with the Caspian Sea. The Tigris and Euphrates Rivers are both depicted, though neither are labeled. Several cities are labeled, including Kandahar, Mosul, and Ninevah. Special attention is accorded to the Holy Land, which is labeled Galilaea, and Jerusalem is depicted by a city in profile, unlike all the others labeled here. The terrain is depicted as being covered in hills or mountains, with very few trees, all of which are illustrated in profile. A decorative title cartouche is situated on the lower left, flanked by two magnificently dressed individuals.

This map was produced by Pieter van der Aa in 1719 and published in Leide.

Alai E. 95 (Leiden)
Looking for a high-resolution scan of this?