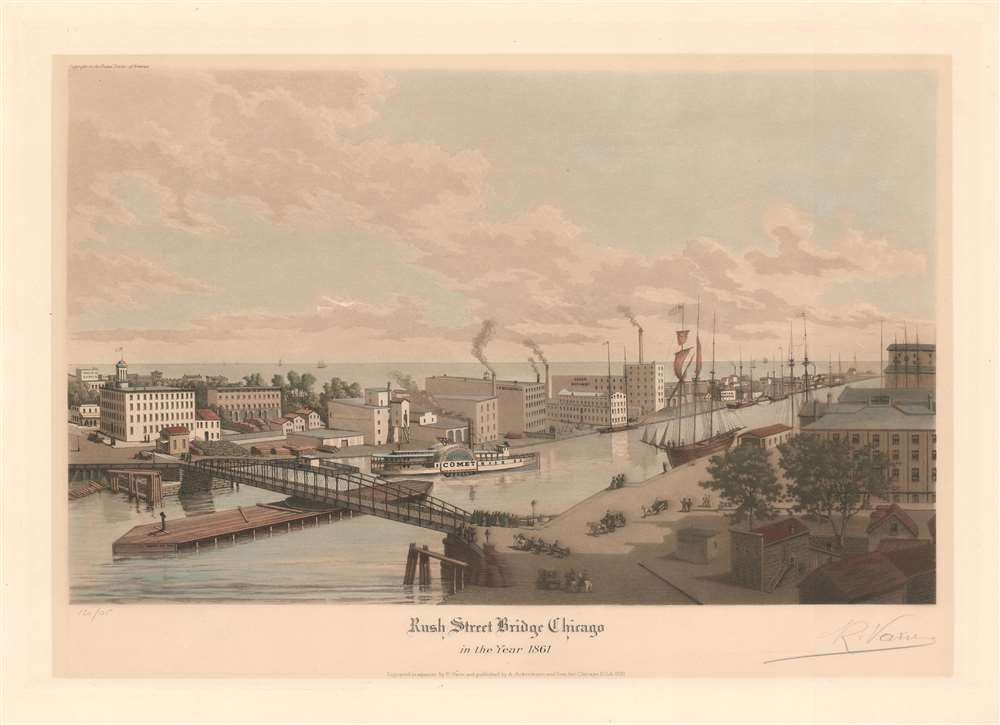 A view of the first Rush Street Bridge that was destroyed three years after it opened.

This is a 1929 Raoul Varin aquatint view of the Rush Street Bridge. The bridge occupies the foreground and a large crowd of people gather on the near end of the bridge. Buildings line the far bank, McCormick's Reaper Factory and the sugar refinery both identified. Sailing ships line both banks of the Chicago River and a steamship, name the Comet steams away from the bridge toward Lake Michigan.

Four bridges have spanned the Chicago River at Rush Street since the 1850s. The present view illustrates the first bridge, which was constructed in 1857. It was an iron and timber swing bridge with a center support and cost $48,000. The bridge operated until 1863, when it was destroyed in an accident.

The following account of the Friday, November 20, 1863, Rush Street Bridge accident appeared in the Saturday, November 21, 1863 edition of Harper's Weekly and was entitled 'The Bridge Accident at Chicago'

A few minutes before five o'clock last evening the iron bridge across the river at Rush Street broke in two while turning, and precipitated twelve human beings and at least fifty cattle into the river. Several were drowned. Owing to the fact that it was growing dark at the time of the accident, and to the bustle and confusion incident to the scene, it was impossible to gather full particulars of the catastrophe. The following is all that could be ascertained:

A herd of fat cattle, numbering about one hundred fifty, was being driven over the bridge, in a northerly direction, at a quarter before five o'clock. About sixty of them were on the bridge, the remainder having crossed over, when the tug Prindiville, having two small vessels in two, came steaming down the river, and blew the whistle as a signal to open the bridge. A minute afterward, and before having arrived within dangerous distance, the captain saw the cattle crowding over, and immediately reversed the screw, signaling the fact to the vessels in tow at the same moment. But it was too late. The bridge-tender saw the tug approaching, and, apprehensive of a collision, he commenced to swing the bridge, the northern end of which was covered with cattle, the south end being empty. Of course, this gave an immense preponderance to the former, and no sooner did the bridge swing clear of the bearings at the abutments than the north end descended. It sunk very slowly till it had dropped eight or nine feet, and then the whole weight of the structure being rested on one edge of the platform the bridge broke in the middle with a tremendous crash, precipitating every thing into the river, the two pieces falling right across the channel, one on each side, and leaving but one narrow space through which a vessel can pass.

There were on the bridge at the same time two drovers, one of them mounted on horseback; James H. Dole, commission-merchant in this city; one woman with a child; a boy; and about four other men. The scene was indescribably terrible. Several of the cattle were jammed in among the broken material, being horribly mutilated, and sending forth most distressing sounds of agony. Human beings were struggling in the wat, shrieking for help, and all around them were the uninjured cattle swimming about, and threatening mischief to their human companions in misfortune. The brig Goble was lying just below at the time, and her captain, Lewis Berry, sent off the first boat to the assistance of the sufferers. Other boats were quickly dispatched to the scene, and then the work of rescue began. This was not easily accomplished, as the animals were very thick in the water, and it was almost impossible to move among them for the purpose of aiding first the passengers. In consequence of this, and the rapidly increasing darkness, no one knew with certainty the number of those in peril. The following is believed to be the correct record of saved and lost.

The bridge-tender leaped from the platform overhead to the one below. He fortunately was not struck by any of the splinters, and escaped with only a few bruises received in falling. His assistant is believed to be lost.

Mr. Dole escaped almost by miracle, falling into the water unharmed, and was picked up almost immediately. The horse and buggy were lost. The animal was a rather valuable one - worth four hundred dollars.

One elderly gentleman secured one of the planks which formed the floor of the bridge, and swam ashore by its aid; three other men were picked up by the boats. The boy was also saved. He said there was a woman walking alongside him when the bridge broke. Nothing was seen of her. She is in all probability lost, with her child. It is feared that both drovers were lost, nothing having been seen of them since, and the cattle were last evening roaming about the street of the North Division, with no one to take care of them.

The horse on which the drover was riding was taken in tow by the Goble's boat and hoisted on board the vessel. He was soon claimed and taken away. In attempting to get him ashore the plank slipped and he again fell into the river. The task of effecting a second emersion was much more difficult than the first. The animal was nearly drowned.

The majority of the cows swam to the dock without aid, and were pulled on land by the by-standers. Of the others, two were seen to drown, and five others were killed after reaching the dock, their injuries being of such in nature as to render recovery impossible. Several others remained inextricably fixed in the wreck, their moanings being plainly heard to a late hour last evening.

Varin likely based this print on a view published by Edwin Whitefield in 1861. The only difference is the title and the typeface.

This view was created by Raoul Varin and published by A. Ackermann and Son in Chicago in 1930. Varin produced a series of thirty-one views of Chicago between 1926 and 1932, each issued in a limited edition of 125 prints. The present print is hand-numbered in the lower-left corner and is number 120 of 125. It is signed by Varin on the lower right. Today, Varin's prints are known to have suffered from poor framing and are generally not in the best condition. The presently offered print, however, is stunning. The view is uncatalogued in OCLC but an example is part of the Smithsonian American Art Museum, the Wisconsin Historical Society, and The Mariners' Museum and Park.

Very good. Even overall toning. Signed and numbered by artist. Blank on verso.
Looking for a high-resolution scan of this?