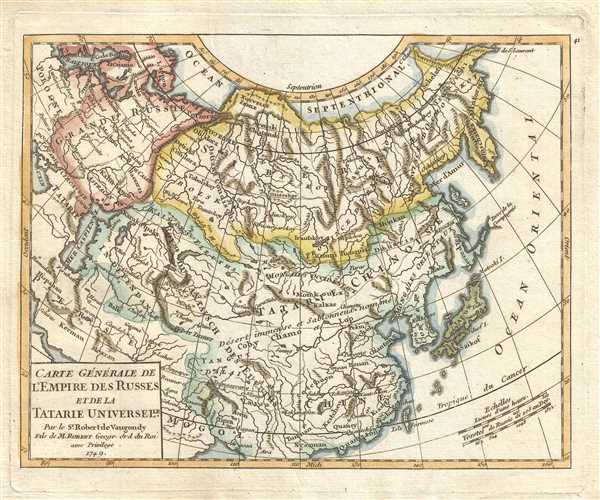 This is a hand colored 1749 Didier Robert de Vaugondy map of Asia. The map depicts from Poland and Scandinavia to Kamchatka, Japan, and the Pacific Ocean and from the Arctic Ocean and Nova Zemba (labeled as Nouvelle Zemle) to Persia and southern China. Russia is divided in two along the Ural Mountains: the western portion 'Great Russia' or Grande Russie includes Moscow and St. Petersburg and the eastern portion, Siberia contains several mountain ranges and forests, all presented in profile, numerous rivers, and a few settlements. Independent Tartary lies between Russia and Chinese territories, traversing from the Black Sea, across the Caucasus and the Caspian Sea, into Asia. China is divided into several different regions, including Chinese Tartary, a few kingdoms, and China proper, which includes Beijing (Pekin) and Nanjing (Nankin). Tibet is labeled, including a reference to the Dalai Lama, and Lhasa (Lassa) is labeled as well. Taiwan / Formosa is labeled along the Chinese coast. The Korean peninsula is both depicted and labeled. Japan is labeled; however, the island of Hokkaido is missing. Throughout the map, rivers and lakes are depicted. Mountain ranges snake across the continent, and cities and towns dot the landscape.