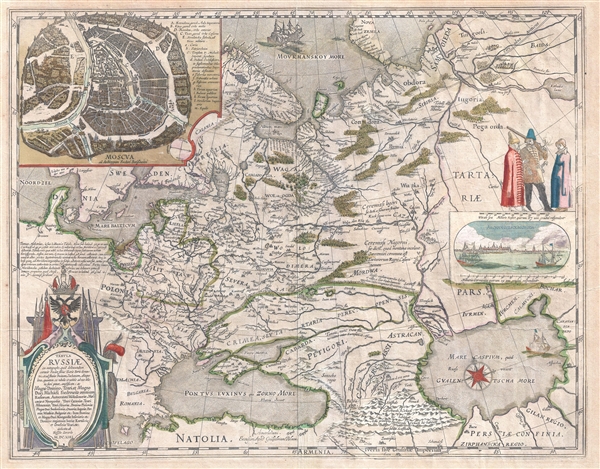 A very attractive 1632 old color example of Hessel Gerritsz's important map of Russia. Centered on Moscow, the map covers from the North Sea to the Caspian Sea and from Nova Zembla to Trabzon (Black Sea south coast). There is a large and impressive inset map of Moscow in the upper left quadrant and vignette view of Archangel (Archangelsckagoroda) at right center.

The large inset of Moscow in the upper left quadrant is of special note. The top left corner features an inset plan of Moscow that is centered on the Kremlin, Belygorod and the Kityagorod and 17 locations via a key to the right. This plan first appeared in print on the present map and proved highly influential, being copied for many decades. At center-there is a view of Archangel, the Arctic port that until the foundation of St. Petersburg (1703), was Russia’s only maritime gateway to the world.

This map is attributed to Fyodor II Borisovich Godunov (1589 – 1605) a precocious young Tzar who ruled Russia from 1598 – 1605, when he was murdered by agents of False Dimitriy I. The well-educated young monarch produced manuscript maps of Russia and Moscow which survive in the Russian national archives. Godunov’s manuscript maps were brought to Amsterdam by Isaac Abrahamszoon Massa (1586-1643), a Dutch merchant and diplomat considered to have been the first western 'Kremlinologist.'

The map illustrates Russia as it appeared during the Time of Troubles (1598-1613), a period of political and social upheaval during the interregnum between the czars of the Rurik Dynasty and the ascendency of the Romanovs. The period included the rise and fall of the ‘False Dmitriys' pretenders claiming to be the heirs of the Rurik Dynasty. During this period Russia suffered from infighting, foreign invasion, and famine. It is estimated that nearly 1/3 of the Russian population died.

Hessel Gerritsz obtained the Godunov maps from Massa and compiled them into the original plates for this map in 1613. A second edition was issued in 1614. Gerritsz died in 1632 and the plate came into the hands of Willem Janzoon Blaeu (1571-1638), who published the present edition.