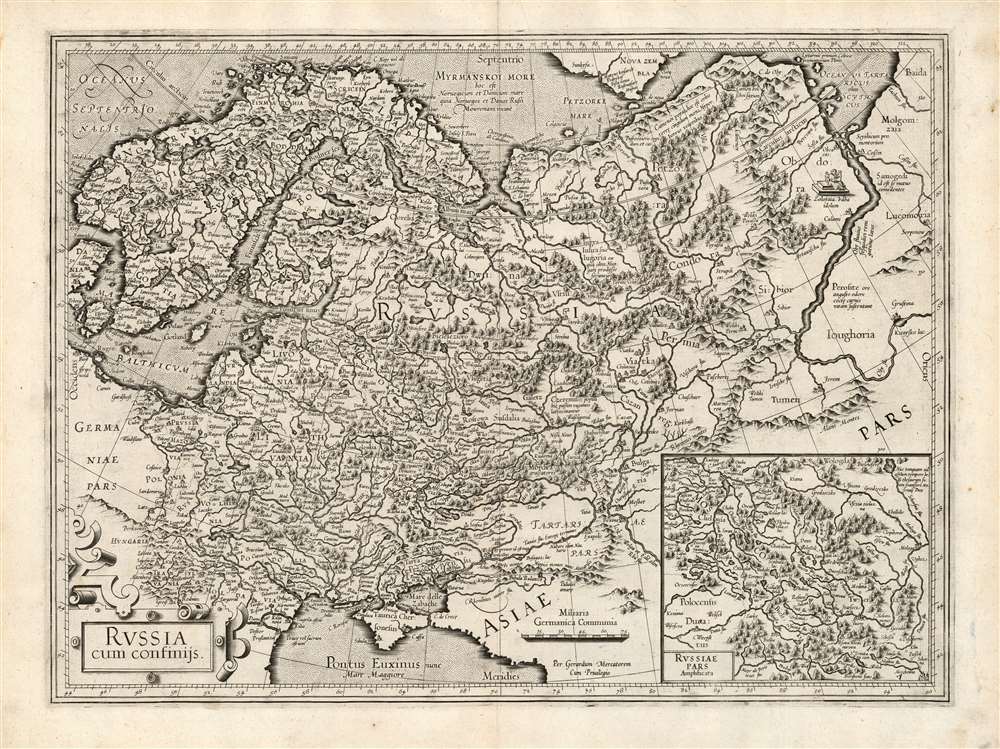 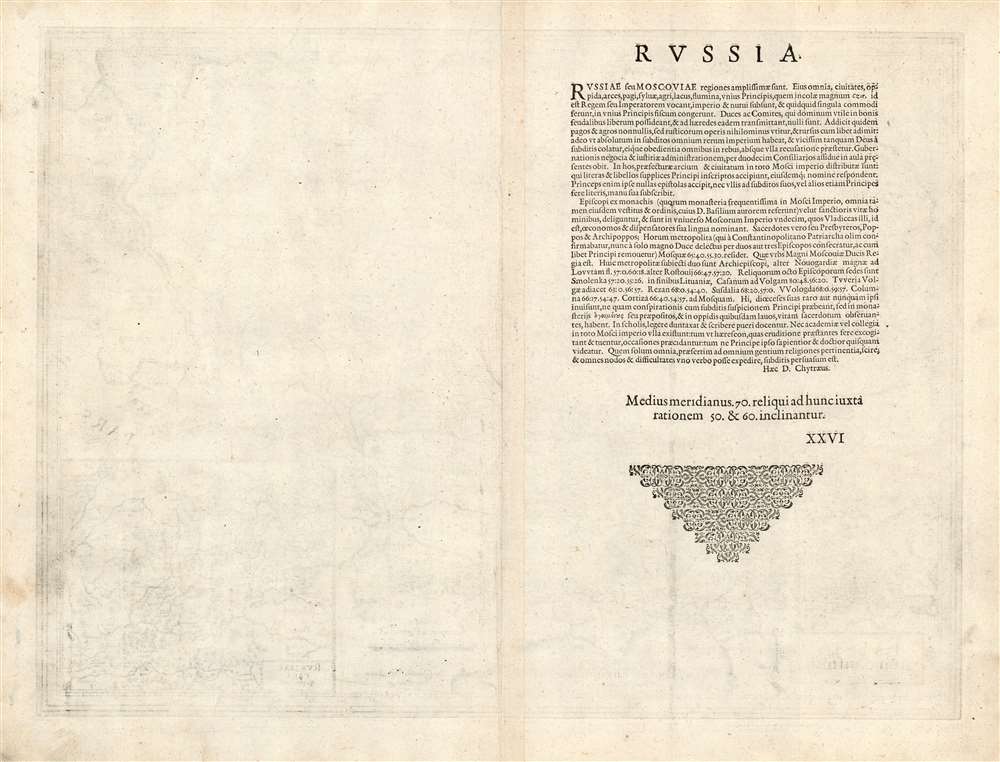 The foundation for the seventeenth century mapping of Russia.
$1,250.00

This is a fine example of Gerard Mercator's first map of Russia, in its first atlas edition of 1595. It is overall the second atlas map of Russia, following the 1570 Ortelius, and is in virtually every respect superior to that precursor. Its detail set the standard for maps of Russia, to the extent that Tsarevich Fyodor Godunov would base his own map on it - and his map provided the basis for the maps of Hessel Gerritz and Isaac Massa, which would dominate the 17th century.

The map's western limits include Scandinavia, Prussia, part of Denmark and the eastern parts of Poland and Hungary and it reaches eastwards just beyond the Ob River. The north is dominated by the Sea of Murmansk and to the south is the coast of the Black Sea. The Volga and Don Rivers, or rather the mountain ranges just beyond them, describe a southeastern limit to the map. An inset map in the lower right provides greater detail in the region around Moscow. The map is filled with descriptive notes. Some simply propose new names in place of antiquated ones, while others are more illuminating. A Latin text describes the Mari people of the Volga River valley, also known as the Cheremis. Largely conquered under Ivan the Terrible, the Marti rebelled as part of the Kazan rebellion of 1552-6 which might explain why the text describes them as nomadic thieves. On the west bank of the River Ob is depicted and named the Zolotaya Baba the Golden Woman, an idol reputedly worshipped by the Samoyed indigenes. In general, however, the further east one ventures on the map, the more Mercator had to rely on ancient and legendary sources. A note northeast of the Dvina River suggests the ancestral source of the Hungarian people. Mercator identifies a mountain range in the extreme north as 'Hyperborea, of the Ancients.' Across the Ob from the Zolotaya Baba is a text describing the Samoyed as cannibals. South of them, Mercator describes a people with mouths so small that they sustain themselves with the mere smell of cooked meat.

The inset map Russiae Pars Amplificata shows the region of Muscovy in sharper detail than the scale of the general map can afford. It was largely drawn from Maciej Miechowita (1457 - 1523), whose map Mercator published in 1538. Its focuses on the region's complicated river system. It includes a Latin note naming and describing the St. Kirill Belozersky Monastery, 'where the Dukes of Muscovy move their treasury in time of war'.

In contrast with Ortelius' map, Mercator's map is a synthesis of a wide array of sources, and was the result of his revision over decades of his own maps. Mercator had mapped Russia in the context of three printed maps: his 1569 world map, his 1572 map of Europe, and the present posthumously published atlas map, and these demonstrate that over the course of their production he continually added to his knowledge of Russian geography. His early work drew on detail from Anthony Jenkinson's map (the same source for Ortelius), but later maps far outstripped the sparse detail of those English reports. Bagrow suggests that Mercator's sources included Olivier Brunei (1552 - 1585), a Dutch merchant and explorer, who had established the first trade routes between the Netherlands and Russia. That knowledge, and his efforts to explore the north coast of Russia, would have made him a valuable resource to the mapmaker. The western regions drew on Polish and Lithuanian sources: Maciej Strubicz (1530 - 1604) and Andrzej Pograbka. (d. 1602). The inclusion of the Zolotaya Baba suggests that Mercator had access to Sigismund von Herberstein's (1486 - 1566) 1557 map of Muscovy, which included the idol and described it.

This map was engraved by Mercator, and first appeared posthumously in the 1595 first edition of Mercator's Atlas sive cosmographicae…. Examples of the map plate remained in the atlas until 1634, until it was replaced by the Hondius map derived from Isaac Massa. This 1595 first state is rare. In other editions the map is well represented in institutional collections, but only four of this first issue appear.