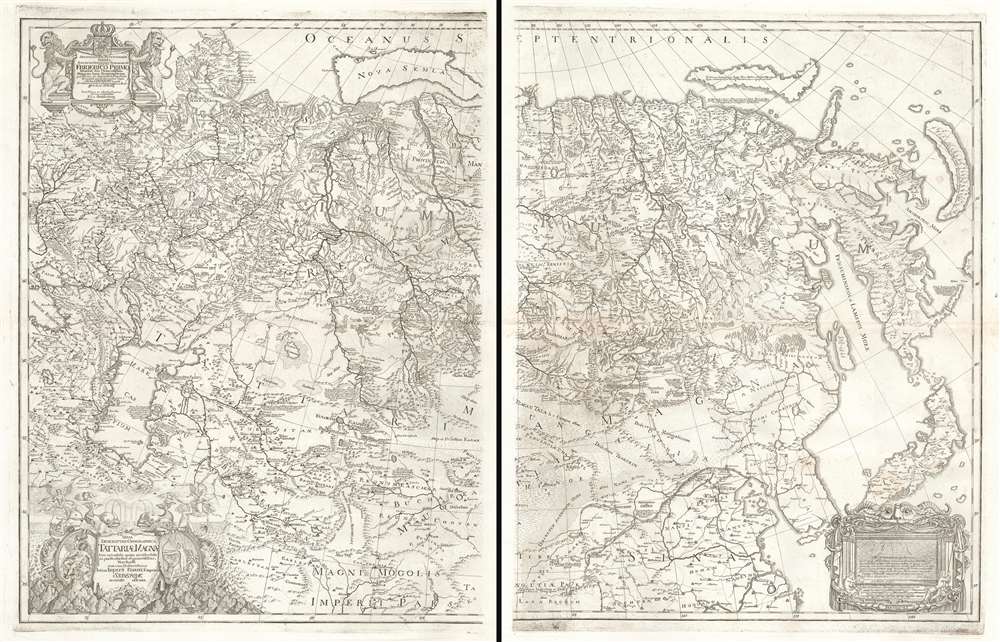 The most important map of the Northeast Passage and pre-Behring map of the NE Asian Arctic.
$7,500.00

A cartographic masterpiece defined by imprisonment, war, and obsession. This is the first edition of Philipp Johann von Strahlenberg's 1730 map of Russia and Siberia. Strahlenberg's expansive map is considered one of the largest, most groundbreaking, and unique maps of Russia to appear in the first half of the 18th century. It is of particular importance to the mapping of Siberia and the Russian Arctic, to establishing expectations for the viability of a Northeast Passage, and to the pre-Bering mapping of the Bering Strait. The map encompasses Russian claims c. 1730, covering from 50° and 185° east longitude to 32° and 75° north latitude. It records Russian territories from Moscow to Japan and Kamchatka, including parts or all of adjacent northern China, Mongolia, Persia, India, Tibet, Japan, Korea, and Turkestan. It is, also of note, the first edition on heavy thick paper - indicative of Strahlenberg's separate issue, as opposed to lesser examples that were folded into his book.

This map originates with the Great Northern War (1700 - 1721) and Strahlenberg's 1709 capture by Russian forces. Strahlenberg was sent to Toblosk, Siberia, along with other Swedish prisoners-of-war. As a noble prisoner, Strahlenberg initially dedicated himself to the study of languages, an activity well documented in his book Das Nord- und Ostliche Theil von Europa und Asia, which includes tables on several Siberian languages including Mongolian. His first map of Siberia, the present map, may have been a simple sketch intended to supplement his linguistic work, but in time developing the map grew to become his primary obsession.

Lacking training as a cartographic draftsman, Strahlenberg turned to fellow Swedish prisoner of war, Johan Anton Matérn, who had mastered mapmaking in Poland, Samogitia and Lithuania. Matérn assisted Strahlenberg in taking astronomical readings as they traveled together around Siberia - apparently with no plans to escape the Russian captivity. In addition, Strahlenberg would ask military officers and travelers passing through Toblosk to annotate his map with lands they had passed through. He also canvased his fellow prisoners, many of whom were sent out on work details to various parts of Siberia, for reports on the lands through which they traveled.

In general, his Russian captors were supportive of Strahlenberg's cartographic work, supplying him in 1715 with a copy of Nicolaas Witsen's 1687 map. Russian compliance with his map work was not, however, universal. In 1717, the Russian Prince Matvey Petrovich Gagarin seized Strahlenberg's map materials - possibly in conjunction with a potential risk of exposing the prince's past time of raiding grave mounds for gold and silver. Nonetheless, Strahlenberg had a spare copy of his notes and was able to recreate the map. As for Gargarin, in 1721 he was hanged 'for the abuse of authority and obstinate concealment of accomplice.'

In 1719, when the German naturalist Daniel Gottlieb Messerschmidt, in the employ of Peter the Great, arrived in Tobolsk to complete an exploratory trip throughout Siberia, Strahlenberg was assigned to accompany him. The pair traveled extensively , taking coordinates, notes, and collecting data from Russian engineers and geographers sent out by the Russian cartographer Ivan Kirilov (1689 - 1737), who had been commissioned by the Tzar to compile a large survey of Russia and who published his own map of Russia in 1727. In addition, during his time in Toblosk, Strahlenberg became familiar with Semyon Ulyanovich Remezov (1642 - 1720) who worked as a tax collector, Imperial official, historian, and mapmaker in Siberia. This data too was incorporated into Strahlenberg's great map.

The Great Northern War between Russia and Sweden ended in 1721, but news of the peace did not reach Siberia until 1722. Strahlenberg began his long voyage back to Sweden in May of 1722, arriving in Stockholm in August of 1723. He began in earnest to find a publisher for his map, initially turning to the Moscow-based German ironmonger Peter Müller, who had wealthy and powerful Russian connections, to finance the project. Müller was uninterested, so Strahlenberg attempted to fund the map using a subscription model. Sadly, with the Swedish economy in tatters following the long war, few subscriptions were forthcoming. At the same time, Strahlenberg took the opportunity to further refine his map, drawing from the 1723 De L'Isle map of Russia and Carl Van Verden's 1719 - 1721 mapping of the Caspian Sea.

Eventually Strahlenberg came into contact with Philipp Jacob Frisch, a Berlin lawyer who sidelined as a map engraver. Frisch completed the engraving on copper for publication in 1730. Frisch may have done the engraving at cost, or taken partial ownership of the work - as the nature of their relationship remains unclear.

The map offers much of interest in the Siberian arctic. Note the long narrow peninsula extending northeasterly from Siberia in the vicinity of the Kolyma River and identified as Noss Tszalatskoi. Today this semi-mythical peninsula is known as Witsen's Peninsula. Around 1648, the Cossack Semen Ivanovich Dezhnev (1605 - 1673) put together a rough and ready expedition to explore the waterways around northeastern Siberia. His company consisted of Fedot Alekseyev, traveling with the merchants Andreev and Afstaf'iev (representing the Guselnikov merchant house), who provided their own ship, and Gerasim Ankudinov, an experienced sea captain with his own ship and some 30 men. Dezhnev, along with Mikhail Stadukhin, recruited 19 men of their own and procured a traditional kocha ship. Including escort vessels, a total seven ships sailed from the mouth the Kolyma River, along the Siberian Arctic, to the Anadyr River north of Kamchatka, and in doing so became the first Europeans to sail through the Bering Strait some 80 years before Vitus Bering. Dezhnev described rounding a large mountainous promontory identified as Chukchi, Tschuktschi, or Chukotka Peninsula. Of the seven vessels the multiple leaders, only three ships, including Dezhnev’s, survived the passage.

Dezhnev ultimately proved that there was indeed a nautical route from the Russian Arctic to East Asia, but at the same time confirmed that it was exceedingly impractical. On his one-year voyage, Dezhnev and his small fleet skirted the Siberian coast in rough conditions, recording only loosely what they saw, but nonetheless described several islands and two large peninsulas. His description of the promontory was subsequently embraced by other cartographers who, lacking serious scientific data from the Dezhnev expedition, surmised the placement and form. Essentially, Witsen's peninsula is a mismapping of the existent Cape Shelagskiy, which Dezhnev rounded, located about 1000 west of the Bering Strait.

The first non-Russian to study this data was Dutchman Nicholaas Witsen, who prepared a map in 1687 based upon Dezhnev's records that he discovered on a 1665 trip to Moscow – hence 'Witsen’s Peninsula' was introduced to western Europe. When European cartographers saw Witsen's map and begin to copy it, they did not know of Dezhnev's voyage or Witsen's sources so, by mid-18th century, some speculated that this was not a peninsula, but a land bridge extending all the way to America.

The Mysterious Island of Puchochotski

This map is one of the few that represents Puchochotski Island - the crescent shaped island at the easternmost extreme of this map. This island is mapped on only a few obscure Russian manuscripts of the same period - probably Strahlenberg's sources - and Johann Baptiste Homann's map of Kamchatka published in 1725, which itself is probably derivative of an unpublished preliminary concept version of Strahlenberg's map sent to the Moscow based Swedish diplomat Josias Cederhielm (1673 - 1729) in 1719 (when Strahlenberg's map materials were seized by corrupt Russian officials and destroyed, he forwarded a copy to Cederhielm in Moscow). Strahlenberg's own sources are probably related to the discoveries of Petr Popov, who was sent from Anadyrsk to the Chukchi Peninsula in 1711 to reconnoiter and negotiate with the Chukchi Tribes. Popov returned with indigenous reports of a large island one day's voyage east of the Peninsula - without question representing Chukchi knowledge of the Behring Strait and Alaska - marking this as one of the earliest published maps to illustrate Alaska based upon experiential knowledge. The small islands here represented in between the two large landmasses are probably Big and Little Diomede. Dezhnev did report islands in this area, but his records leave their identity unclear.

As noted by Leo Bagrow in Imago Mundi:

It is to be regretted that Strahlenberg's map has so far not been studied to any large extent. After Remezov, it is the second most important source of historical geographical information about Siberia. Yet it did not have a great influence on maps of the following period and, in a way, stands apart.

Strahlenberg's map is certainly a composition of great merit for the time in which it appeared 1730 and proves that he had taken a great deal of pains to collect materials for the tract lying between the Russian borders and those of India and Persia. Through the want of observations of longitude, his distances are often very faulty; but I am of opinion that his ideas were too much slighted by some geographers who came after him; and who have given the preference to matter of much less value, than that which he has exhibited.

Other scholars, such as Raymond H. Fisher, praise Strahlenberg's map as a considerable advancement over all previous cartography of Siberia.

This great map was compiled between 1709 and 1722 in Toblosk, Russia, and published in 1730 in Paris by Philipp Johann von Strahlenberg and Johan Anton von Matérn. The map was engraved by Philipp Jacob Frisch. It was issued both folded into Strahlenberg's great work Das Nord- und Ostliche Theil von Europa und Asia, and separately, as here. In 1736 the map was re-engraved on a smaller scale by R. W. Seale for the English Edition of Strahlenberg's book.

Philipp Johann von Strahlenberg (October 6, 1677 - September 7, 1747), aka Philip Johan Tabbert, was a Swedish army officer of Germanic descent. Strahlenberg was born in the Hanseatic town Stralsund, now Pomerania, Germany, but then part of Sweden. Strahlenberg joined the Swedish army in 1694, being promoted to Captain in 1703. When he was ennobled in 1707, he took the name Strahlenberg. During the Great Northern War (1700 - 1721) between Russia and Sweden, Strahlenberg was captured and sent to Tobolsk, where he lived the commodious life of a noble prisoner of war from 1711 to 1721. During this time, he developed a fascination with the the geography of Siberia and studied the anthropology, languages, and customs of its indigenous peoples. He also worked as an assistant to the German explorer and naturalist Daniel Gottlieb Messerschmidt (1685-1735), who was then working for Peter the Great. Along with fellow Swedish prisoner, Johan Anton von Matérn, Strahlenberg dedicated himself to the composition of a large new map of Russia. Strahlenberg recommended that the Ural Mountains serve as the eastern borders of the European continent, an idea that was later approved by the Tsar. He returned to Sweden in 1722, and in 1730 he published an important book about Siberia, Das Nord- und Ostliche Theil von Europa und Asia (North and Eastern Parts of Europe and Asia), and its accompanying map.


Johan Anton von Matérn (October 22, 1683 - December 20, 1764) was a Swedish military officer and cartographer active in the late 17th and first half of the 18th century. Matérn was born in Stockholm. He joined the military sometime around 1704, rapidly raising through the ranks. In 1708 he led a detachment to make maps of Poland, Samogitia and Lithuania. He was captured by Russia forces during the Battle of Perevolotjna (1709) during the During the Great Northern War (1700 - 1721) and, along with Philipp Johann von Strahlenberg (1676 - 1747), sent to Tobolsk, Siberia. He returned to Sweden in 1722. Matérn worked with Strahlenberg to produce a new map of Russia, which the issued in 1730.


Philipp Jacob Frisch (1702 - December 4, 1753) was a German lawyer, painter, and map engraver based in Berlin. Frisch was the son of the ornithologist and linguist Johann Leonard Frisch. He studied painting under Samuel Gottlieb Hanrich and Wilhelm Busch. Frisch had two brothers, the Protestant priest Just Leopold Frisch, and fellow engraver, Ferdinand Helfreich Frisch. The family is best known for their production of a large and graphic book about the birds and insects of Germany, begun by Johann Leonard, but completed by his sons, and grandson, the painter Johann Christoph Frisch. Philipp Jacob Frisch also engraved Strahlenberg's 1730 map of Russia.