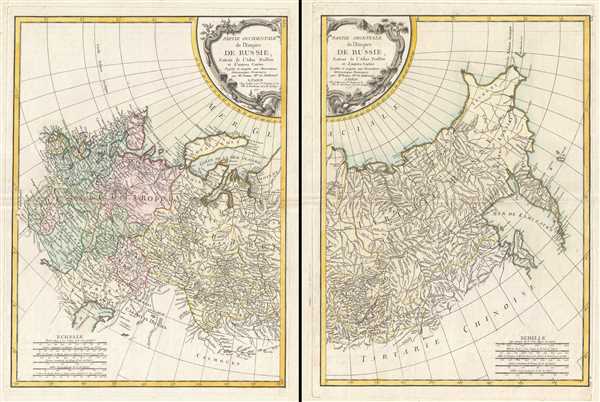 An incredibly detailed depiction of Eastern Europe, Russia, and Siberia - includes a hint of the coast of Alaska!

This is a 1771 Rigobert Bonne map of Russia. On two sheets, the map depicts from the Baltic Sea to Siberia and the Bering Strait, and from the Arctic Ocean to the Caspian Sea, Sakhalin and Kamchatka. Drawn in extraordinary detail, the myriad rivers and mountain ranges present in this vast country are labeled. Eastern Europe is divided into several different regions and principalities, while the expanse of Siberia stretches across three quarters of the two pages. The extreme eastern coast of Siberia clearly exhibits information gathered by the explorations of Vitus Bering and Tschirikow, especially regarding Kamchatka and the Bering Strait. A mysterious land mass (clearly North America) is noted beyond the Siberian mainland with a note 'Cote decouv. en 1730' (coast discovered in 1730). A decorative baroque title cartouche is situated in the center where the two maps meet, or on the top right and top left, respectively.

Drawn by Rigobert Bonne in 1771 for issue in Jean Lattre's Atlas Moderne.

Very good. Blank on verso. 2 maps. Measurement is for 1 map.