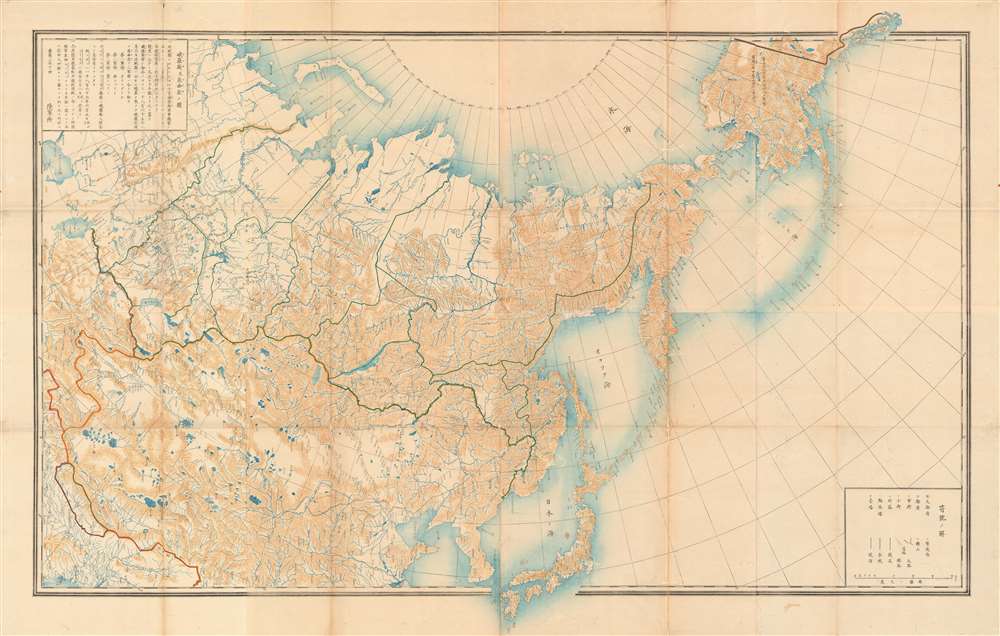 An extraordinary 1867 Keio 3 map of Siberia and Alaska illustrating a moment of cultural collision and transformation. Printed in Japan using a remarkable multi-color copperplate process, the map presents a conic projection covering Asia from the Caspian Sea to the Bering Strait. It extends father east to include Alaska, and south to encompass Nepal, Korea, Tibet, most of China, and all of Japan. This is the first Japanese regional map to incorporate contemporaneous western cartographic technology for official strategic and military use.

The map expresses both the Shogun Tokugawa Yoshinobu's attempt to modernize the Japanese military with French assistance, and outright concern over European and American encroachment into East Asian territories. It makes specific reference to American purchase of Alaska, and to Russian expansionism in Khujand (Tajikistan) on June 5th 1866 and Jizzakah on July 2nd of the same year. It also mentions the August 6th, 1865 Russian re-organization of the Tzardom's East Asian territories into three new military districts, an act seen as preparation for war: the Central Military District, the West Siberia Military District, and the East Siberia Military Districts.

Between 1854 and 1869, Japan underwent a cultural awakening as it opened to western trade and technology and was forced to reevaluate its place in the world. Russia was rapidly expanding eastward and aggressively looking for a warm water port on the Pacific. Meanwhile, in 1853, United States Navy Commodore Matthew Perry sailed his fleet into Edo Harbor, forcing the Tokugawa to open trade with the west after hundreds of years of state-imposed isolation. In the year this map was issued, 1867, Russia sold its claims on Alaska to the United States, bringing American ever close to Japan.

The End of the Tokugawa

Within Japan, the Emperor Kōmei died in January of 1867 (Keio 3) and the child Emperor Meiji took the throne. Nonetheless, the empire remained under the waning control of the last Shogun, Tokugawa Yoshinobu. Yoshinobu recognized threats from European powers in Russia and from Americans across the Pacific, who with the acquisition of Alaska, were one step closer to Japan.

Tokugawa Yoshinobu, in an attempt to modernize the Japanese military, appealed to Napoleon III, who sent a military advisory mission under Captain Charles Sulpice Jules Chanoine (1835 - 1915). Chanoine trained Tokugawa troops for roughly a year, introducing them to western style combat, weaponry, and maps - commissioning western style maps in Japanese like this, illustrating Japan's position as a player on the world stage. The troops trained under Chanoine were ultimately defeated in the Boshin War (1868 - 1869), a Japanese civil war wherein the Emperor Meiji overthrew the Tokugawa Shogunate and reasserted imperial power, the Meiji Restoration. When Meiji won the Boshin War, Chanoine and his delegation were expelled from Japan.

An Outstanding Feat of Copperplate Engraving

Although at first glance this map gives the impression of chromolithography, this technology had, in fact, not yet made its way to Japan. Instead, this map was produced through a multi-layer copper engraving process requiring a least three plates printed in different colors - blue for the waters, black borders text and lines of latitude and longitude, and brown topography. Topography in particular is beautifully stylized using a Japanese proto-contour system to illustrate mountains, valleys, peaks, and ranges - an effective technique blending eastern and western cartographic conventions with no previous precedent. The achievement is even more remarkable when one considers that most printing in Japan up to about 1860 was woodblock. The introduction of western style copperplate engraving followed the opening of treaty ports in 1858, but was not widely embraced and is rarely seen on a Japanese map this early - and certainly nothing else exhibiting this level of copper engraving mastery is known.

This map was published by Matashiro Maeda and Matsudaira Nuhinokami, presumably under the direction of the French military attaché charted with modernizing the Shoghun army, Charles Sulpice Jules Chanoine. Chanoine also likely supplied the source map, a currently unknown Russian map issued at the order of General M. G. Cherniaev (1828 - 1898). There are no other known examples. This map is owned jointly with Vetus Carta.

Very good. A few verso repairs and reinforcements.
Looking for a high-resolution scan of this?