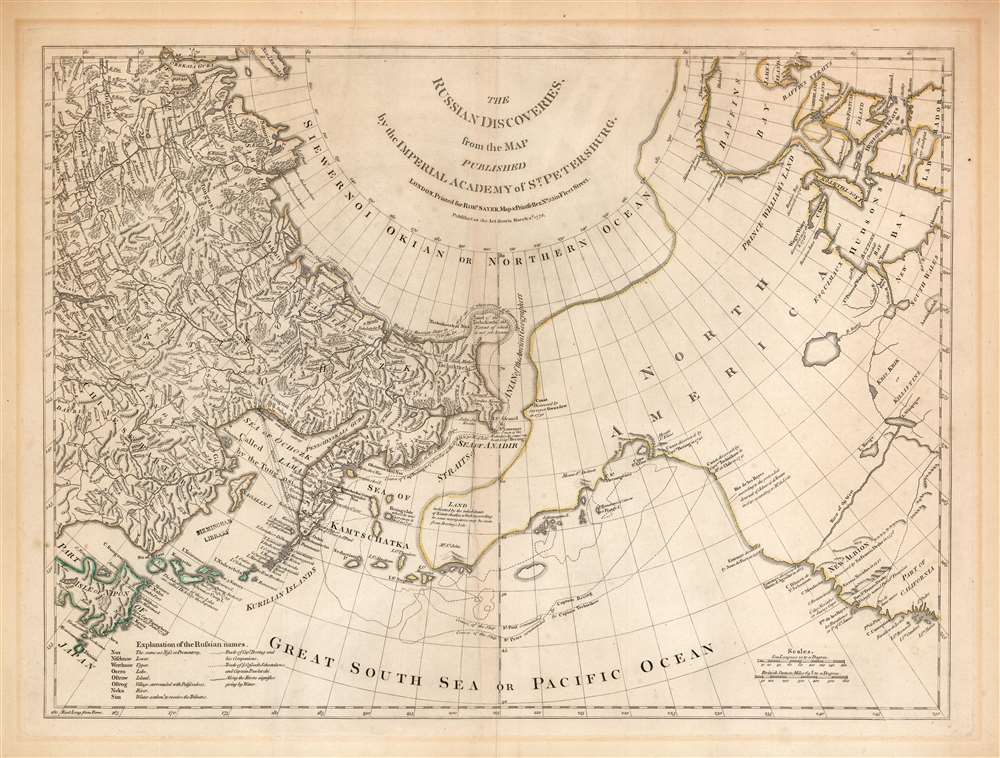 Presenting the proto-Alaska Muller Peninsula, refuting the Sea of the West.
$1,400.00

An attractive example of Robert Sayer's 1775 translation of Gerhard Friedrich Müller's map presented to refute the spurious geography of the Pacific Northwest proposed by the French cartographers Philippe Buache and Joseph Nicolas De l'Isle. The map covers the same area as the 1752 Buache / De l'Isle map, and uses similarly state-of-the-art data from Russian explorers to show their successes in sailing via a Northeast Passage into the Pacific. This map however presents Müller's cartography of the American Northwest in explicit contradiction of the Buache/De l'Isle imaginary Sea of the West, and reliance on the fictional journeys of Admiral De Fonte. Thus, the map includes the North Pacific, including parts of Alaska, the Pacific Northwest, and Northeast Asia. Coverage extends from the Arctic Circle south to the latitudes of Vancouver and Japan. Most dramatically, the map includes a large, speculative peninsula extending westward from North America towards Asia. This, known as the Müller Peninsula, would become the dominant geographical model for the Pacific Northwest coast until the actual exploration of those coastal areas by Captain Cook in the 1770s. The map is also notable for its unusual Bulbous promontory in northern Siberia, an interpretation of the Witsen Peninsula, itself a mismapping of the Chukchi Peninsula.

Müller's Nouvelle Carte Des Decouvertes Faites Par Des Vaisseaux Russes, published in 1754, was the first official map to reflect the results of Vitus Bering's Great Northern Expedition. The Great Northern Expedition was one of the largest and best organized voyages of exploration, the results of which completely remapped most of the Arctic coast of Siberia and some parts of the Northwest coast of America, filling in vast amounts of previously unknown coastal detail, which previously had been the subject of myth and speculation. Originally conceived by Russian Emperor Peter I the Great, the exploration was undertaken under the auspices of Russian Empresses Anna and Elizabeth, under the direction of the Danish navigator Vitus Bering. Lasting from 1733 - 1743, the expedition was intended to map the eastern reaches of Siberia and map the Northwest Coast of America. Its many accomplishments include the European discovery of Alaska, the Aleutian Islands, the Commander Islands, and Bering Island, as well as a detailed mapping of the northern and north-eastern coast of Russia and the Kuril Islands. The expedition formally ended the myth of a massive land mass in the North Pacific.

Following the Bering expedition, Joseph Nicholas de L'Isle, younger brother of the major French cartographer Guillaume de L'Isle, privately published (along with Buache) his interpretation of The Great Northern Expedition's Discoveries. J. N. de L'Isle was employed by the St. Petersburg Royal Academy at the time, but upon his brother's death, quit the position and returned to Paris. He partnered with Phillipe Buache to publish a wildly speculative map of the Pacific Northwest that did much to popularize the mythical of the Sea of the West, and which combined that fictional sea with the equally imaginary journeys of the (also imaginary) Admiral De Fonte, in order to suggest a viable sea passage between the Pacific Ocean and Baffin's Bay, or perhaps even Hudson's.

The Russians believed that de L’Isle improperly used information he gathered while serving in St. Petersburg at the Royal Academy. Moreover, they were aware of his incorrect delineation of the Northwest Coast of America and were offended that this referenced and demeaned their excellent academic reputation. Irritated by the publication, the St. Petersburg Academy of Sciences ordered Gerhard Müller to compile a more accurate map from the complete official accounts of the Great Northern Expedition. That resulted in a 1754 map that is the first to speculate a large peninsula extending westward from the American Pacific Northwest. That peninsula, a kind of Proto-Alaska, became known as Muller's Peninsula.

The map went through several issues, each with updates. The 1758 edition adds a route across the Mer D'Ochozk, but is otherwise largely unchanged from the 1754 edition. The first major revision appeared in 1773, when Jacob van Staehlin revisited the Muller map in light of new discoveries from 1764 onwards by Russian explorers (Ivan Synd) as well as Russian fur merchants (Promyshlenniki) navigating the region. Van Staehlin removed Muller's peninsula, replacing it with a series of small islands surrounding a larger island. Although still inaccurate, the archipelago is far closer to the Aleutians and the Alaskan mainland than any previous map.

All Müller maps and their derivatives, of course, exclude the Buache/De L'Isle 'Sea of the West' - although Müller's geography does include a speculative 'River of the West' in its place, connecting the northern California coast to Hudson's Bay. Streeter notes that Müller's map confirmed the existence of a body of water between Asia and America, the subject of much dispute over the previous two hundred years. It also showed the Kuril Islands correctly and suggested the outline of Alaska and the Aleutian chain.

Note the bulbous peninsula extending northeasterly from Siberia east of the Kolyma River and identified as 'Tschuktschi'. Today this semi-mythical peninsula is known as Witsen's Peninsula. Around 1648, the Cossack Semen Ivanovich Dezhnev (1605 - 1673) put together a rough and ready expedition to explore the waterways around northeastern Siberia. His company consisted of Fedot Alekseyev, traveling with the merchants Andreev and Afstaf'iev (representing the Guselnikov merchant house), who provided their own ship, and Gerasim Ankudinov, an experienced sea captain with his own ship and some 30 men. Dezhnev, along with Mikhail Stadukhin, recruited some 19 men of their own and procured a traditional kocha ship. Including escort vessels, a total seven ships sailed from the mouth of the Kolyma River, along the Siberian Arctic, to the Anadyr River north of Kamchatka, and in doing so became the first Europeans to sail through the Bering Strait some 80 years before Vitus Bering. Dezhnev described rounding a large mountainous promontory identified as Chukchi, Tschuktschi, or Chukotka Peninsula. Of the seven vessels the multiple leaders, only three ships, including Dezhnev’s, survived the passage.

Dezhnev ultimately proved that there was indeed a nautical route from Arctic Siberia to East Asia, but at the same time confirmed that it was exceedingly impractical. On his one-year voyage, Dezhnev and his small fleet skirted the Siberian coast in rough conditions, recording only loosely what they saw, but nonetheless described several islands and two large peninsulas. His description of the promontory was subsequently embraced by other cartographers who, lacking serious scientific data from the Dezhnev expedition, surmised the form. Essentially, Witsen's peninsula is a mismapping of the existent Cape Shelagskiy, which Dezhnev rounded, located about 1000 miles west of the Bering Strait.

The first non-Russian to study this data was Dutchman Nicholaas Witsen, who prepared a map in 1687 based upon Dezhnev's records that he discovered on a 1665 trip to Moscow – hence 'Witsen’s Peninsula' was introduced to western Europe. When European cartographers saw Witsen's map and began to copy it, they did not know of Dezhnev's voyage or Witsen's sources so, by mid-18th century, some speculated that this was not a peninsula, but a land bridge extending all the way to America!

This map was published by Robert Sayer in the 1776 edition of the Jefferys atlas, which he and John Bennett had taken over after Jefferys' death. We see twenty-seven examples of the separate map in OCLC.


Gerhard Friedrich Müller (Фёдор Ива́нович Ми́ллер; October 29, 1705 - October 22, 1783), also known as Fyodor Ivanovich Miller, was a Russian-German historian, ethnologist and cartographer. He was born in Herford and educated at Leipzig. In 1725, he was among the European scholars invited to St. Petersburg to co-found the Imperial Academy of Sciences. Müller took part in the Academy's Great Northern Expedition (Second Kamchatka Expedition; 1733 - 1743), he and eighteen scientists and artists traveled the area to perform ethnological and botanical studies, as well as collecting data for the creation of maps. Müller's descriptions and categorizations of clothing, religions and rituals of the Siberian ethnic groups earned him the title 'father of ethnography.' He produced an essential map of the arctic and sub-arctic regions of the Pacific in 1754, motivated to counter the geographic frauds perpetrated by Joseph Nicholas De l’Isle (1688 - 1768) and Phillippe Buache (1700 - 1773). He knew both Vitus Bering (1733 - 1743) and Aleksei Chirikov (1703 - 1748), and was as close to his subject matter as any cartographer of his age. Learn More...

Jefferys, T., The American Atlas: Or, A Geographical Description Of The Whole Continent Of America ..., (London: Sayer and Bennett) 1776.