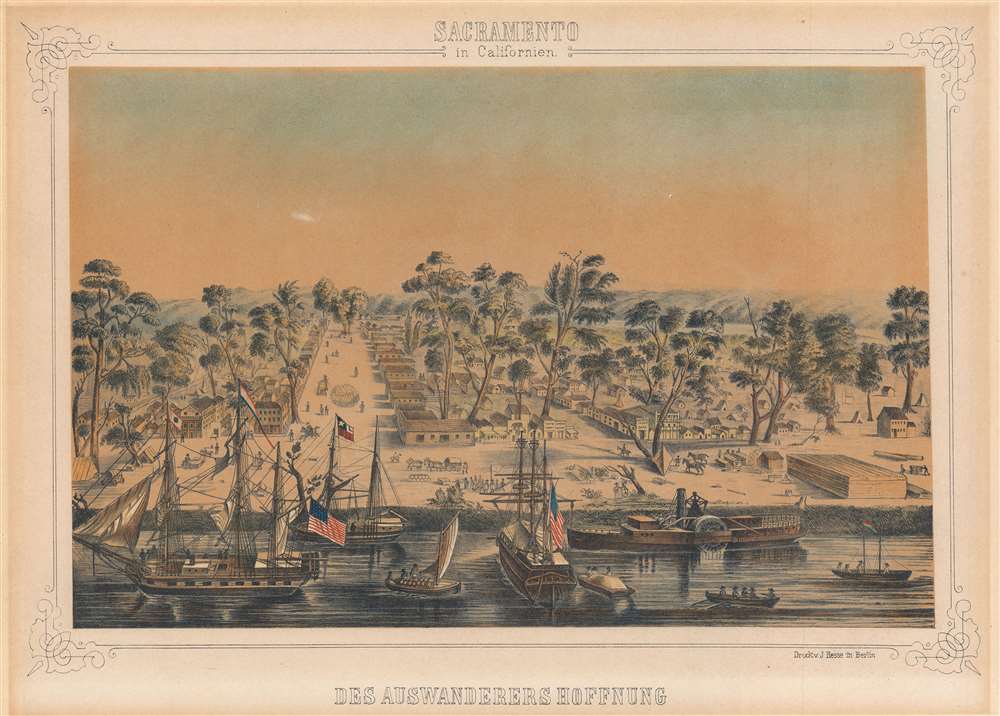 This is a rare c. 1850 German lithograph view of Sacramento, California at the height of the California Gold Rush. The map depicts the booming city of Sacramento from the waterfront on the Sacramento River towards the city looking down J Street. Numerous buildings are illustrated along the waterfront and along J Street. Building materials are stacked along the shoreline at the lower right - underscoring the building boom that followed in the wake of the Gold Rush. Ships moored along the riverfront include several sailing ships and a sidewheel steamship. Rowboats are used to ferry people and goods from the ships to the shore. American flags are flying from two of the ships and, front and center, another bears the flag of Chile. One of the buildings on the waterfront, likely a saloon, is decorated with a large elephant.

One of the buildings along the waterfront bears the image of a large black elephant. This is a reference to the popular Gold Rush saying, 'I've Seen the Elephant', meaning I have passed through great adversity and come out the other side stronger and still motivated. The cross-country trek or sea round-Cape-Horn sea voyage to California was then so arduous that, by the time '49ers arrived in Sacramento, all had 'seen the elephant'. The symbol of the elephant was adopted as a marker of pride, and placed on saloons and business - as here.

The expression originates from an old fable. A poor farmer heard a circus with an elephant was coming to a nearby town. Curious to see one of the giant creatures, he headed to town, also taking his cart and produce, hoping to sell to circus-goers. On the road, he encountered the elephant, who spooked the horse, upset the cart, and ate all of the produce. To which the farmer declared, 'I don't care, for I have seen the elephant!'

The discovery of gold at John Sutter's mill by James Wilson Marshall (1810 - 1885) in January of 1848 was one of the most definitive moments in American history. Coming at the end of the Mexican-American War (1846 - 1848), the timing of the discovery could not have been more propitious. The combination of new seemly unlimited territory and the lure of gold led to a stampede of adventurers, prospectors, merchants, and homesteaders ready to take their chance with a new life on the frontier. The Gold Rush was not limited to Americans crossing the Great Plains. European, Australian, and even Chinese immigrants rushed into California hungry for their part of the great strike. This Great Migration of peoples transformed the United States in the span of just a few years from a former colony into an expansive transcontinental nation on the cusp of becoming a world power

This view was printed by Johann Friedrich Hesse around 1850 and published by the German magazine Verlags Magazin. Scarce.

Johann Friedrich Hesse (November 24, 1792 - 1853) was a Berlin-based German painter and lithographer active in the 19th century. Hesse was born in Magdeburg, Saxony-Anhalt, Germany, in 1792. His father was a musician and he received his education at the Magdeburg Provincial Art School and later at the Royal Academy of Dresden. There he studied under Schubert and Retsch. After graduating he lived for a time in Hamburg where he may have married Dorothea Loysa Koch in 1813. In 1838 Hesse again relocated, this time to Berlin, where he established a lithography studio and print shop to supplement his income as painter. Little is known of his life, nonetheless, both paintings and lithographs do appear on the market from time to time. In particular, he is known to have issued a series of images of American cities geared toward the German emigrant community. Learn More...

Library of Congress, PGA - Hesse--Sacramento... (B size)
Looking for a high-resolution scan of this?