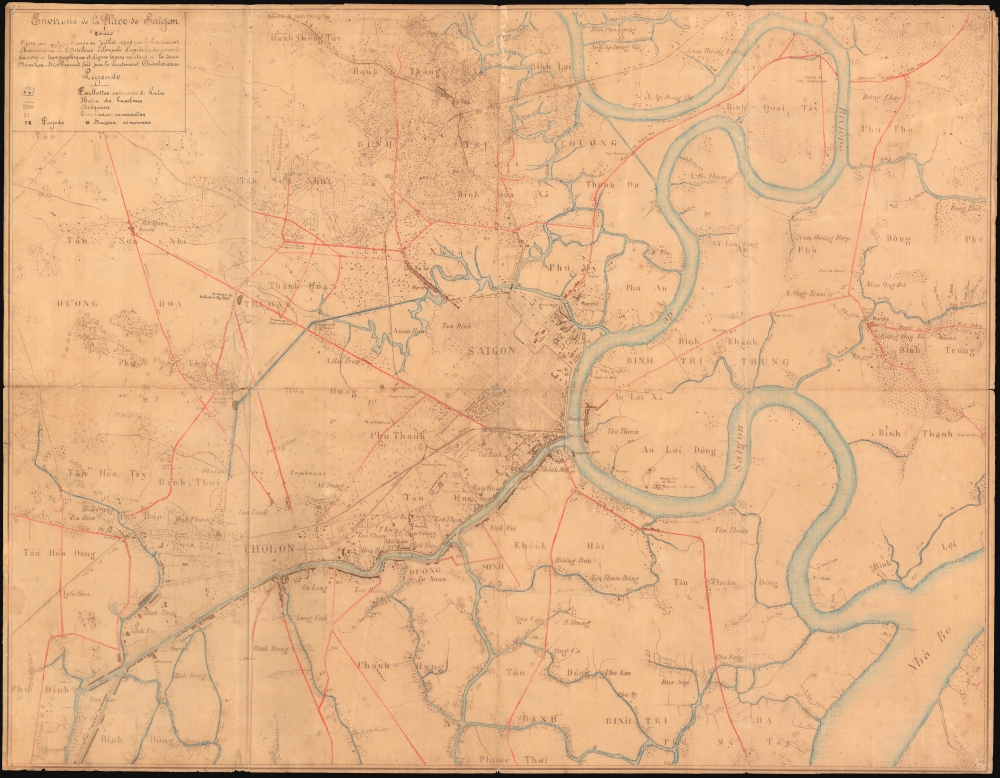 One of a kind French Colonial map of Saigon made for an artillery officer.
$6,500.00

An exceptional, highly detailed combination ferro-gallic and manuscript map of Saigon or Ho Chi Minh City, Vietnam prepared in 1904 for Lieutenant Chantereau, an officer serving there with the Artillerie Coloniale. The map is centered on the center of Saigon City, roughly corresponding to the modern District 1, west of the Song Sai Gon River between the Nhiêu Lộc River and the Bến Nghé Rivers. It extends significantly into the surrounding regions, then dotted by small villages, pagodas, and markets, all of which is now part of metropolitan Saigon. The focus of the map appears to be network of roadways, railroads, tramways, and river connections between the trading center of Cholon (Chợ Lớn), then a separate city, and Saigon. Most of the text is either French or transliterated Vietnamese. City, town, village and canton boundaries are delimitated using various types of dotted lines referenced in the legend, lower right. Pagodas, throughout, are marked with a 'P'.

This is a unique piece. Ferro-gallic printing is a heliographic process (laying the original on light-sensitive paper and placing it under a strong list light to transfer the image) suitable field duplication of documents only the extremely small quantities, usually less than 10, underscoring the rarity of this map. Although the typography throughout suggests a it was heliotyped from a printed map, the present map has been much embellished by manuscript work in red and black ink defining major roads - which often amounted to causeways in this swampy terrain. The map is clearly described as derived from a military survey completed by the French colonial army's Service Topographique during the campaigns of 1899 - 1900, with subsequent regular filed updates. The updates may relate to the 1904 survey of Capitaines Sherdiin Benoît et Gros.

French forces captured Saigon for the Emperor Napoleon III in 1859 and the territory formally ceded to France in 1862 by the Vietnamese emperor Tự Đức. In the same year Saigon was made capital of French Cochinchina or South Vietnam, a large colony central to French colonial ambitions in Asia. In 1887, it became the capital of the greater the Union of French Indochina. Unlike most French colonial cities, Saigon was French administered both de jure and de facto. The French lavished wealth on their new city. As the capital of Cochinchina, Saigon was transformed into a major port city and a metropolitan center, with beautiful villas, imposing public buildings, railroad infrastructure, and well-paved, tree-lined boulevards. By the late 19th century, Saigon was the principal port for rice and other goods from the Mekong Delta. Writing on a 1904 trip to Saigon, the anonymous Frenchwoman C. Vray, describes the city,

Saïgon is the Paris of Cochinchina, it’s the city of luxury and temptation, and how many, failing to resist, have foundered miserably in a whirlwind of pleasure? One spends too much money, one spreads one’s wealth here. It’s all about who spends the most and the best in this high society life where everything can be procured at a price.

In 1902, the capital of the Incochinese Union was moved to Hanoi, but Saigon continued as the capital of Cochinchina, and as a center of trade, culture, and colonial life.

Ferro-Gallic printing, also called 'Iron Gall Print' is a photo-reproductive process developed in 1859 by Alphonse Louis Poitevin. The process became popular in the late 1880s when it was introduced commercially, particularly as it could be used to make fast copies of tracings and allowed for corrections to be made during the printing process. Moreover, copies could be made directly form originals without an intermediary negative process. Due to the chemicals used in this process, the background is never white, instead taking on a pale brown to lavender tint. Like most photo-reproductive processes of the period, ferro-gallic printing was useful only for short run printing, usually of less than 5 copies, and not practical for mass production. Moreover, due to the photoreactive nature of the print, and the low-quality field papers generally used, ferro-gallic prints rarely survive more than 30 years or so, making the early examples extremely scarce. The ferro-gallic process is similar to the Diazo Print or Whiteprint process, which replaced it in popularity in the early 20th century.

This map is a ferro-gallic heliotype prepared in Saigon from the French Army's Service Topographique's general map of the region, now lost, surveyed roughly in 1900, an updated subsequently. The map features manuscript additions and in red, blue, and brown/black. This particular heliotype was produced for the use of Lieutenant Chantereau, an officer with the Artillerie Coloniale stationed in Saigon. We have been able to discover little of Chantereau, but there are very limited references to him in several colonial reports suggesting he spent at least 3 years in the region. As a custom map made for a single officer using a limited-run process, we can safely assume this is a unique piece.

Good. Even overall toning. Some wear on original fold lines. Manuscript original color. Old heliotype printing naturally faded, with some manuscript overwriting.
Looking for a high-resolution scan of this?