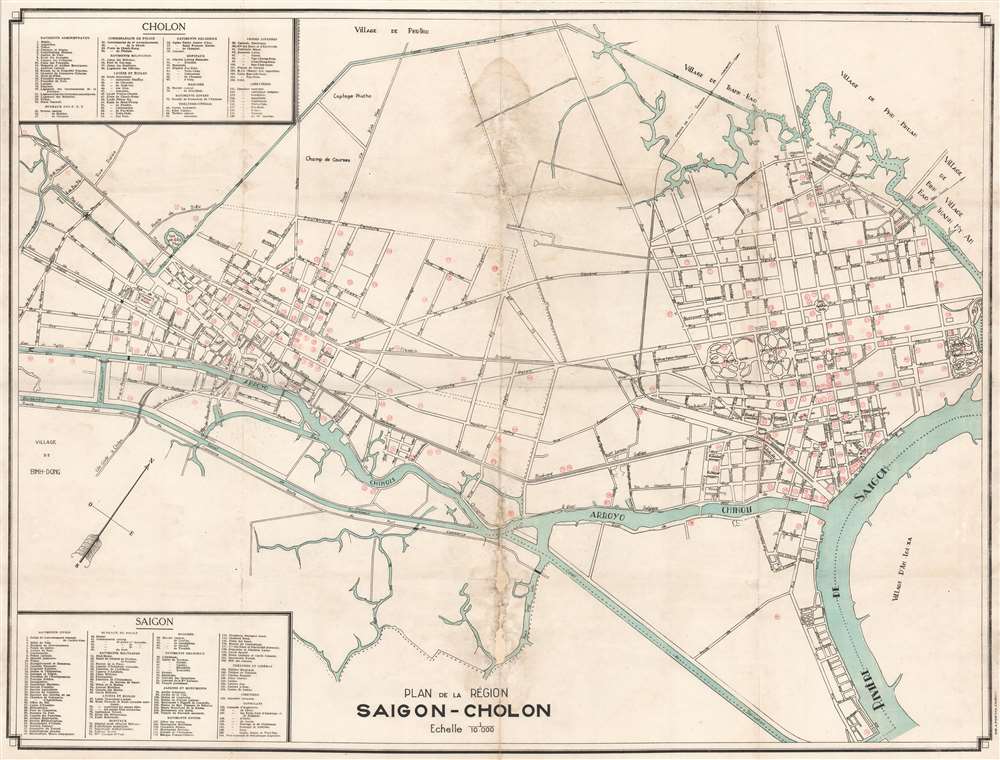 Saigon shortly after the creation of Saigon-Cholon.
$1,500.00

A rare c. 1935 map of Saïgon or Ho Chi Minh City, Vietnam, at the time French Indochina. The map is oriented to the northwest and covers both Saigon and Cholon from Saïgon River (VieSông Sài Gòn) to Bình Tiên in Cholon. An elaborate scale in the lower left identifies 144 numbered locations, among them religious buildings, police buildings, hospitals, theatres and cinemas, consulates, schools, and gardens.

In 1931, a new region called Saïgon–Cholon was formed consisting of Saïgon and Cholon. However, they remained separate cities with their respective mayors and municipal councils. In 1956, after South Vietnam's independence from France in 1955, the region merged into a single city, modern Saïgon. The name was formally changed to Ho Chi Minh City in 1976.

French forces captured Saigon for Emperor Napoleon III in 1859 and the territory was formally ceded to France in 1862 by the Vietnamese Emperor Tự Đức. It the same year it was made capital of French Cochinchina or South Vietnam, a large colony central to French colonial ambitions in Asia. In 1887, it became the capital of the greater the Union of French Indochina. Unlike most French colonial cities, Saigon was French administered both de jure and de facto. The French lavished wealth on their new city. As the capital of Cochinchina, Saigon was transformed into a major port city and a metropolitan center, with beautiful villas, imposing public buildings, railroad infrastructure, and well-paved, tree-lined boulevards. By the late 19th century, Saigon was the principal port for rice and other goods from the Mekong Delta. In 1902, the capital of the Indochinese Union was moved to Hanoi. Saigon remained under French control until Vietnamese independence in 1955.

The map is undated, but based upon the geography, we believe it to date to about 1935. It was issued by Alert Portail and printed in Saigon. This map is very scarce. The present example is only one of two known examples, the other being held in the Olin Library of Cornell University.

Albert Portail (July 5, 1881 - August 25, 1961) was a French publisher, bookseller, stationer, and printer active in Saigon (Vietnam / French Indochina) in the early 20th century. Portail was born in France. He arrived in Saigon in on April 13, 1905 to work at Ménard-Rey printing works. In 1908 he took over management of 'Imprimerie Coudurier and Montégout', which a few years earlier acquired the stock of 'Claude et Cie' (1881 - 1905). In 1910, he purchased 'Coudurier and Montégout'. Portail's bookshop was located at 185 Rue Catinat, Saigon. Their printing works were established in 1914. He expanded with a branch in Phnôm-Penh (Cambodia) in 1922. From then until 1935, when he returned to France, he was the largest bookseller in Saigon. At that time the business in Saigon passed onto his son, Ernest Portail. His younger son, René Portail, went on to managing a supply and purchasing office in Paris. Portail died in Chambéry, France. Learn More...

Average. Old fold discoloration and repair - including some repaired loss. Laid down on archival tissue.