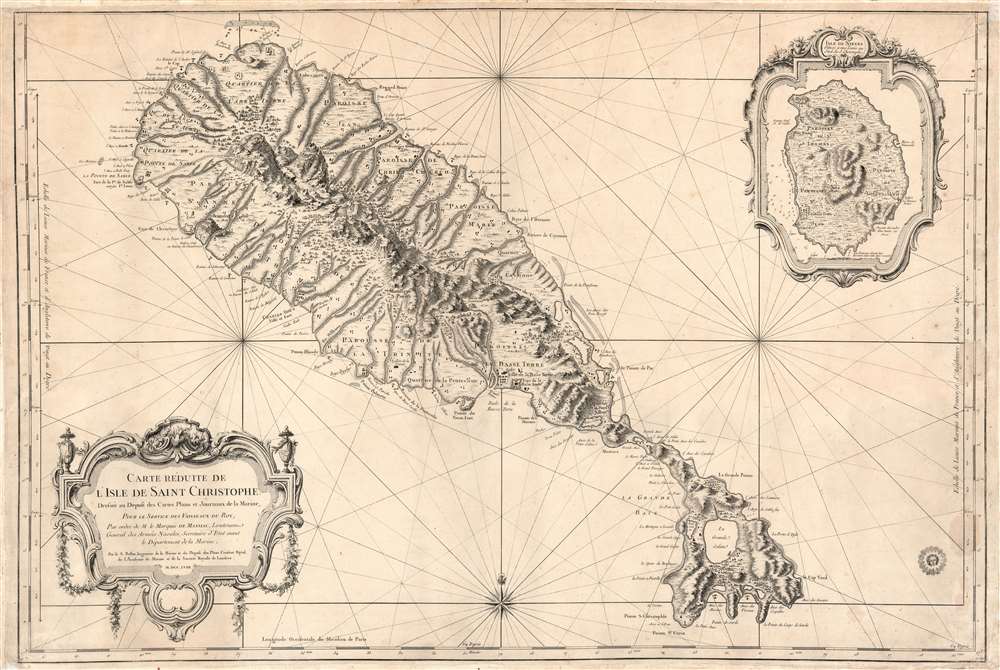 This is a large, scarce, 1758 Bellin map of the Caribbean islands of St. Christopher / St. Kitts and Nevis. The map is superbly engraved, with dramatic pictorial mountains, finely rendered forests, and two elegantly rendered cartouche frames. The grand scale of the map allows richer detail than any map of these islands we have seen until the Jefferys map based on Anthony Ravell's (1675 - July 3, 1727) c. 1717 Survey. Although Ravells' work predates this map, Bellin would not have had access to it, and placenames and navigational details diverge sharply. Like most maps of these islands, including Bellin's own smaller-format map, this was based largely on the surveys of Andrew Norwood (16?? - 1685). The maps of Moll, Bowen, and Mount and Page all relied on Norwood's survey for source material. But this map shows more concrete, contemporaneous data than the Norwood, including individual structures in many cases. Since this was intended for use by the French Navy, it is very likely that more recent intelligence was consulted, none of which has otherwise survived.

During the course of the 17th century, the island saw the establishment of colonies by the English (1623) and the French (1625). The two colonial powers vied for dominance, cooperating only in the massacre of the indigenous Kalinago population, and interrupted only for a year by the 1629 Spanish occupation. Thereafter, the English and French partitioned the island, and it changed hands several times by both military action and treaty. By the time this map was printed, rule of the island passed to the British according to the terms of the Peace of Utrecht - although the place names reflect the French tenure on the eastern part of the island.

We Can't All Choose For Whom We Work

Bellin's production of this map occurred during the short-lived ministry of Claude Louis d'Espinchal, marquis de Massiac (1686 -1770), who for a brief and inglorious tenure (May 31 - October 31, 1758) was the Secretary of State for the French Navy. The Marquis was the first member of the nobility of the sword to hold the position, which he proved unwilling to administer, deferring the actual labor to his deputy minister, Norment de Mazy. The disastrous fruits of this arrangement would include the fall of Louisbourg (1758), the loss of the island of Gorée in Senegal (1758), British attacks along the Brittany coast, and France’s generally poor naval performance in the Seven Years' War (1756 - 1763). Both Norment and the Marquis were be removed from their positions after only five months. Norment wrote of d'Espinchal that 'he brought to the ministry, in his person, a nullity which he did not know how to hide.'

The map bears an unusual collection stamp representing a face surrounded by rays of light. This stamp appears on a variety of maps published around the same period, most located in institutions or prestigious private collections. We have not been able to positively identify the stamp. It bears a significant resemblance to the insignia of Louis XIV, the Sun King (1638 - 1715), but the map is much to late to correspond to that monarch. It may have been part of a legacy library associated with the King, and the identity of the stamp certainly merits further research.

The map was executed in 1758 for publication through the Department de Marine. Many were separate issues, though some were collected in the Departement's Hydrographie françoise. Recueil des cartes marines, générales et particulières dressées au Dépôt des cartes, plans et journaux. OCLC only lists separate copies of the map in the British Library, Villanova University, the University of Wisconsin, the Biblioteca Nacional de Espana, the Bibliotheque National de France, and Yale University. An example bound into a composite atlas can be found in the Rumsey collection; we see three examples of the Hydrographie in institutional collections.


Anthony Ravell (1675 - July 3, 1727) was a British surveyor. He was born in Leicestershire; nothing is known of his education or upbringing. By 1699 he admitted as a surveyor by the Council of Monserrat; he achieved the title 'Surveyor General of the Leeward Islands' with St. Christopher (Saint Kitts), Nevis and Monserrat falling under his purview. He produced a superb map of St. Christopher, which was published by Sayer in 1770, Jefferys in 1775, and thereafter by both Laurie and Whittle and Le Rouge. There is shockingly little information available about this man - He was listed among the subscribers for Pemberton's 1728 A View of Isaac Newton's Philosophy. He died on July 3, 1727 in Saint Kitts. Learn More...