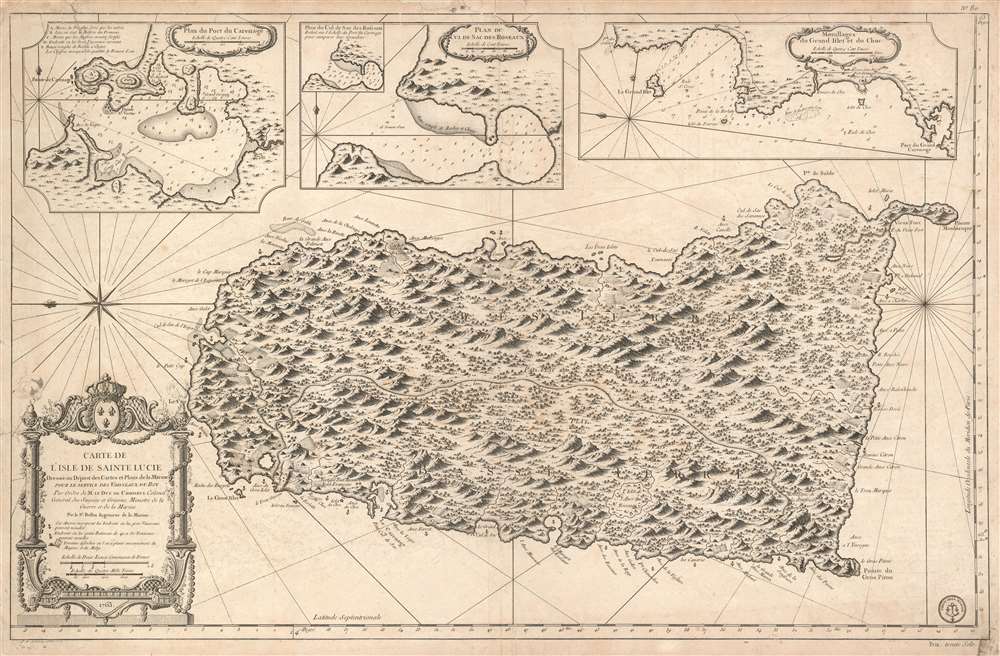 Published soon after the French regained possession of the island after the Seven Years' War.

This is a 1763 Jacques-Nicolas Bellin map of the island of Saint Lucia. Created soon after the end of the Seven Years' War (which is known as the French and Indian War in the United States), the map depicts the entirety of the island in stunning detail, illustrating the mountainous terrain that is also covered in forests. Numerous coastal locations are labeled, including several harbors that are marked by anchors. Three inset maps are included along the top border illustrating the Port of Carenage (today the town of Castries), the Cul de Sac des Roseaux (a bay along the island's western coastline), and part of the island's western coast from the Grand Islet to Carenage.

Saint Lucia During the Seven Years' War and the American Revolution

As stated above, this map was created soon after the end of the Seven Years' War. The British occupied Saint Lucia in 1762, the year before this map's publication, without facing any resistance. Saint Lucia was returned to France the following year (1763) as part of the Treaty of Paris. Then one of the harbors illustrated and labeled on this map, Le Grand Cul de Sac was the site of a major battle between the British and the French in 1778 during the American Revolutionary War, in which an inferior British force defeated the French and regained control of Saint Lucia, which was again returned to the French at the end of the war as part of the Peace of Paris signed in 1783.

This map was created by Jacques-Nicolas Bellin and published by the Dépot des Cartes et Plans de la Marine in 1763. This map is well represented in institutional collections and is uncommon on the private market.

Good. Even overall toning. Soiling. Remargined along top and left side. Blank on verso.