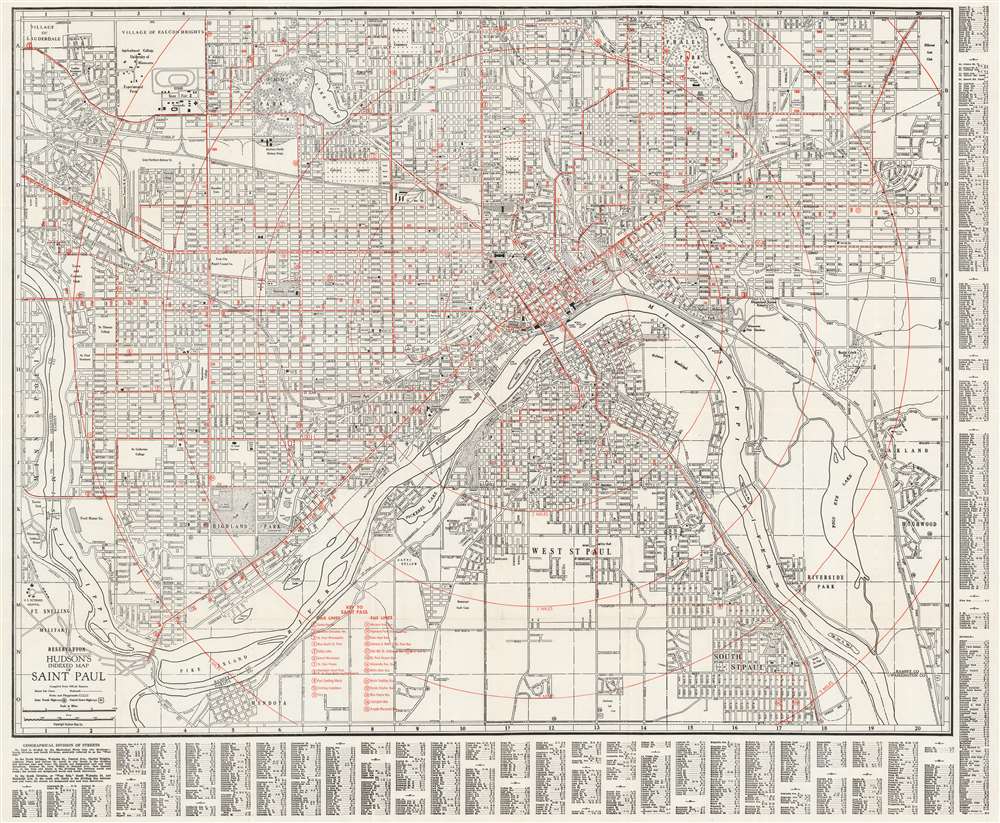 This is a c. 1929 Hudson Map Company city map or plan of Saint Paul, Minnesota. With the Mississippi River winding its way through the center of the city, the map depicts from the Village of Lauderdale, the Village of Falcon Heights, and Lake Phalen to Mendota and South Saint Paul and from Minneapolis to Oakland and Highland. Streets and avenues are labeled throughout. Country clubs, parks, and golf courses are illustrated, including Riverside Park along the Mississippi. Numerous railroads, such as the Great Northern and the Chicago, Milwaukee, St. Paul, and Pacific are traced through the city. The State Capitol Building, City Hall, Union Station, the State Fairgrounds, the University of Minnesota, the St. Joseph Orphanage, and the Northern Pacific Railway Shops are identified, as is the U.S. Veterans Hospital and the Fort Snelling Military Reservation.

This map was created and published by the Hudson Map Company c. 1929.

The Hudson Map Company (1892 - present) was founded in Minneapolis in 1892 by Horace B. Hudson. Hudson began his business with a small handbook of Minneapolis that was soon recognized as essential to visitors as well as those who were just moving into the area. Initially located in downtown Minneapolis, the firm quickly began expanding and published maps and handbooks for citizens and businesses. In the early 1900s Charles L. Hall moved to Minneapolis and, having worked for a company that specialized in making promotional maps, soon began working for the Hudson Map Company. Hall and another employee, Walter Eng, bought the Hudson map form Hudson a few years later. Hall and Eng changed direction slightly by opening a map store (which remained in business until 2011, when the Hudson Map Company decided that it was going to focus more on internet sales). Eng retired in 1945 and Hall became the sole owner of the business. Kenneth Hall, Charles Hall's son, joined the business in 1952 was president by 1965. In 1972, Charles T. Hall became a part of the family business, and in 1997 Joshua T. Hall, the fourth generation of the Hall family to work at the Hudson Map Company, joined the firm as a cartographer. The Hudson Map Company was sold in 2012 to its current owner.

Very good. Light wear along original fold lines. Area of verso reinforcement. Verso repair to a fold separation. Blank on verso.
Looking for a high-resolution scan of this?