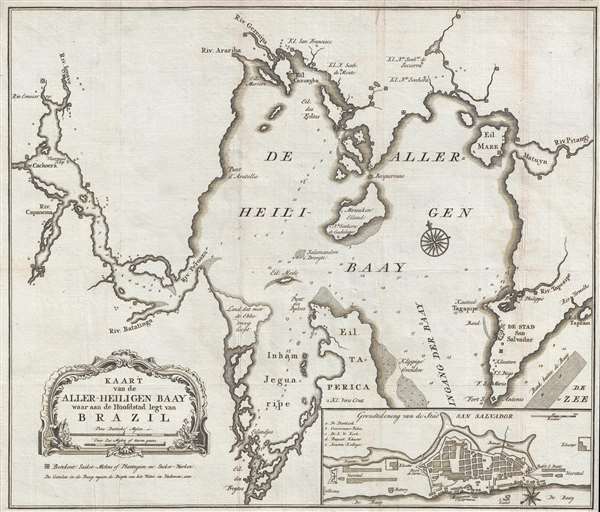 Includes an inset map of Salvador, now the capital of the state of Bahia in Brazil.

This is a 1767 Isaak Tirion map of Salvador and the Baia de Todos os Santos (All Saints' Bay) in the state of Bahia in Brazil. The map depicts the region, including the entirety of the bay, from the south, with Salvador and the entrance to the bay located in the lower right corner. Numerous rivers and streams are illustrated emptying into the bay, the larger of which are labeled. Small symbols, a square surrounding a circle, are scattered throughout, mostly along rivers or on the shores of the bay. These symbols indicated the location of a sugar plantation or mill, one of the major exports from Brazil during the 18th century. Numerous depth soundings are included throughout the bay, with the highest concentrations appearing around what appears to be the bay which allows access to San Salvador and along what must be the most common routes within the bay. An inset map of San Salvador, known today as Salvador, is situated in the lower right corner. This inset map details the layout of the city, and labels several locations within the city, employing a small alphabetic key for a handful of these locations.

This map was produced by Isaak Tirion in 1767.