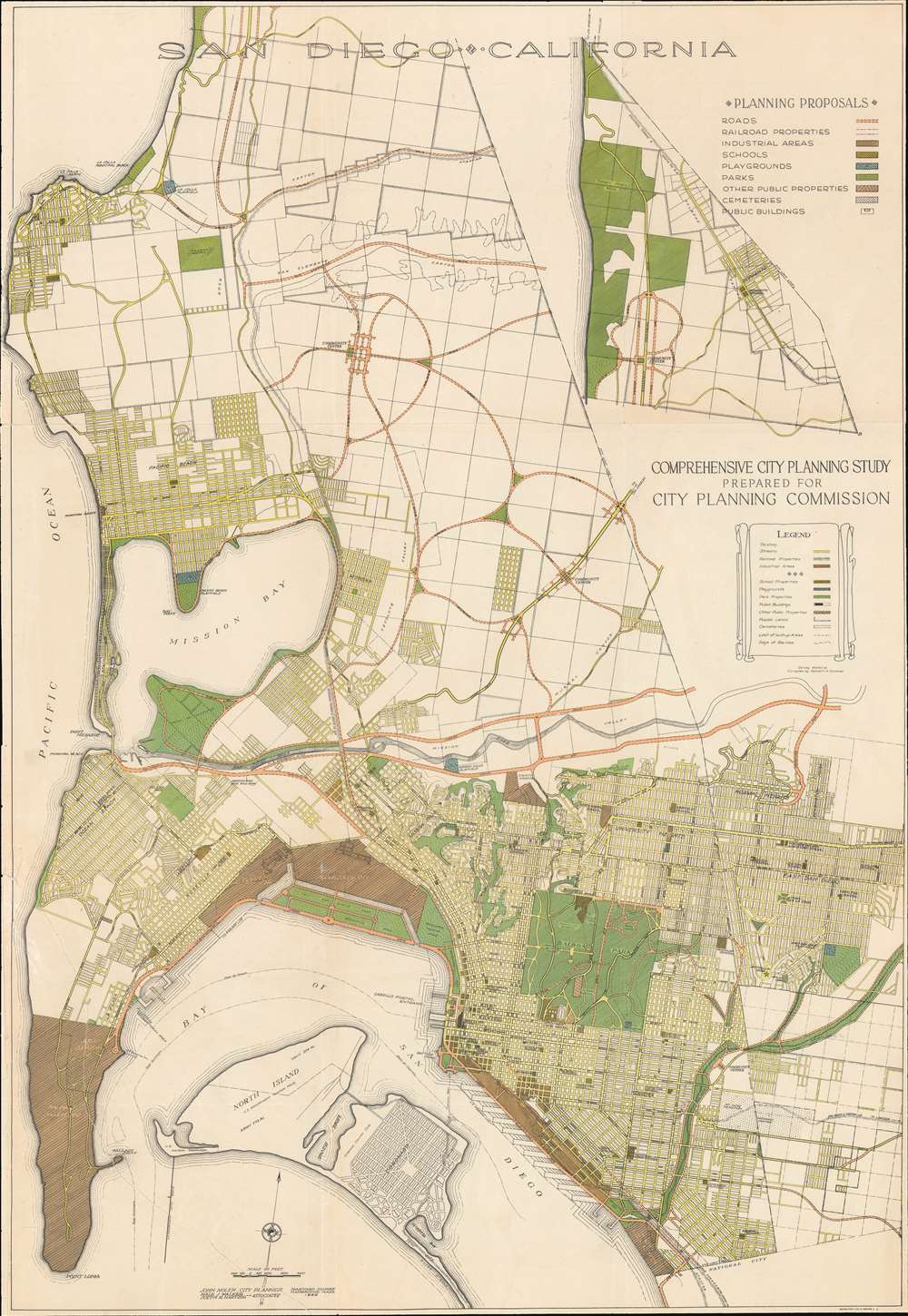 The underpinning of modern San Diego.

A rare example of John Nolen's 1926 comprehensive city plan or map of San Diego. This is the second and most influential of Nolen's two San Diego planning maps and forms the underpinning of modern San Diego. Oriented slightly west of north, the map covers from La Jolla to Point Lomas and from the Pacific coast to Garnet Street. It is color coded according to Nolan's municipal design proposals, with special areas delegated for schools, industry, parks, public properties, playgrounds, and more.

John Nolan was a young civil engineer when Balboa Park designer Samuel Parsons Jr. (1844 - 1923) recommended him to produce a municipal development plan for the city of San Diego - an enormously ambitious project for the relatively inexperienced civic planner. Nolan completed his first San Diego plan in 1908. This plan, which called for open public spaces and gardens, was only partially implemented due to a business-driven city council.

Nonetheless, Nolan proved a passionate and effective promoter of civic design and earned the support of George White Marston (1850 - 1946), one of San Diego's wealthiest and most influential citizens. In 1923, San Diego's governance changed, business-mayors were replaced by engineer-mayors who understood civic design as the underpinning of successful urbanization - a dichotomy later known as 'smokestacks vs geraniums'. Nolan was called back to create a new, even more ambitious municipal plan.

The 1926 Nolan Plan expanded Nolan's utopian urban vision to the then rural fringes of the city - laying a detailed foundation for future expansion. The plan called for the straightening of the main entrances to San Diego, additional parks throughout the city, and full beautification of the entire bay front as a public space. The 1926 Nolan plan was only implemented in part, as it needed to be revised as technology (read San Diego Airport), industry, housing, transportation, and shipping evolved. According to civic design historian John Hancock, this was exactly what Nolan intended,

Nolan's plans galvanized the supporters of both smokestacks and geraniums, provided a clear vision for the city's future, and established planning as an ongoing public process.

In Nolan own words, civic design is intended to 'awaken and form public opinion and furnish a goal toward which all future development should trend', rather than being a static architecture to which growth had to slavishly adhere.

This plan was designed by John Nolen with the assistance of Hale J. Walker and Justin R. Hartzog in Cambridge, Massachusetts, based upon survey material compiled in San Diego by Kenneth A. Gardner. It was printed by Rapidlitho, located at 11th and Santee, Los Angeles, California. The map was included in Nolan's A Comprehensive City Plan for San Diego, California, published in 1926. The source volume is well represented in institutionally, but scarce to the market. We see no record of the separate map on the private market or in institutional collections.

John Nolan (June 14, 1869 - November 18, 1937) was an American landscape architect and civil engineer active throughout the United States in the first half of the 20th century. Nolan was born an orphan in Philadelphia, Pennsylvania. He placed at the Girard School for Orphaned Boys where in 1884 he graduated first in his class. In 1891, after several years working as a grocery clerk, he enrolled at the prestigious Wharton School of Finance and Economics at the University of Pennsylvania. He developed his interested in architecture and urban design in 1895 while on a trip to Worcester College, Oxford, England. Selling all of his possessions to finance the effort, he enrolled in the Harvard School of Landscape Architecture to study under New York's Central Park designer, Frederick Law Olmstead (1822 - 1903). He graduated in 1905 and immediately joined the American Society of Landscape Architects. His first urban design work was in Madison, Wisconsin, where he began laying out city parks as early as 1908. He went on to significant projects in Virginia, Georgia, and California. His most significant work was in and around San Diego, where he complied two influential city-wide plans (1908, 1926) that defined the city's subsequent growth. Learn More...


Kenneth Alexander Gardner (July 2, 1893 - November, 1964) was an urban planner and landscape architect active in San Diego in the early 20th century. Gardner was born in Evanston, Illinois and west to high school at Lowell Preparatory. Gardner matriculated at Harvard in 1916, taking a degree in Landscape Architecture. He was initially employed in John Nolan's (1869 - 1937) Cambridge, Massachusetts, Landscape Architecture office, but relocated at Nolan's request to San Diego in 1923 to become the city's first full time Planning Engineer. At the same time, he partnered with Nathaniel E. Slaymaker (1880 - 1962), to form 'Gardner and Slaymaker', a private landscape design enterprise that constructed such prestigious buildings as the Scripps Lath House in La Jolla - a kind of greenhouse build of solid wood slats popular in southern California to promote the growth of shade-loving plants. After 1932, his professional record disappears. He may have returned to in 1932 Boston then traveled in Europe. He died in California in 1864. Learn More...