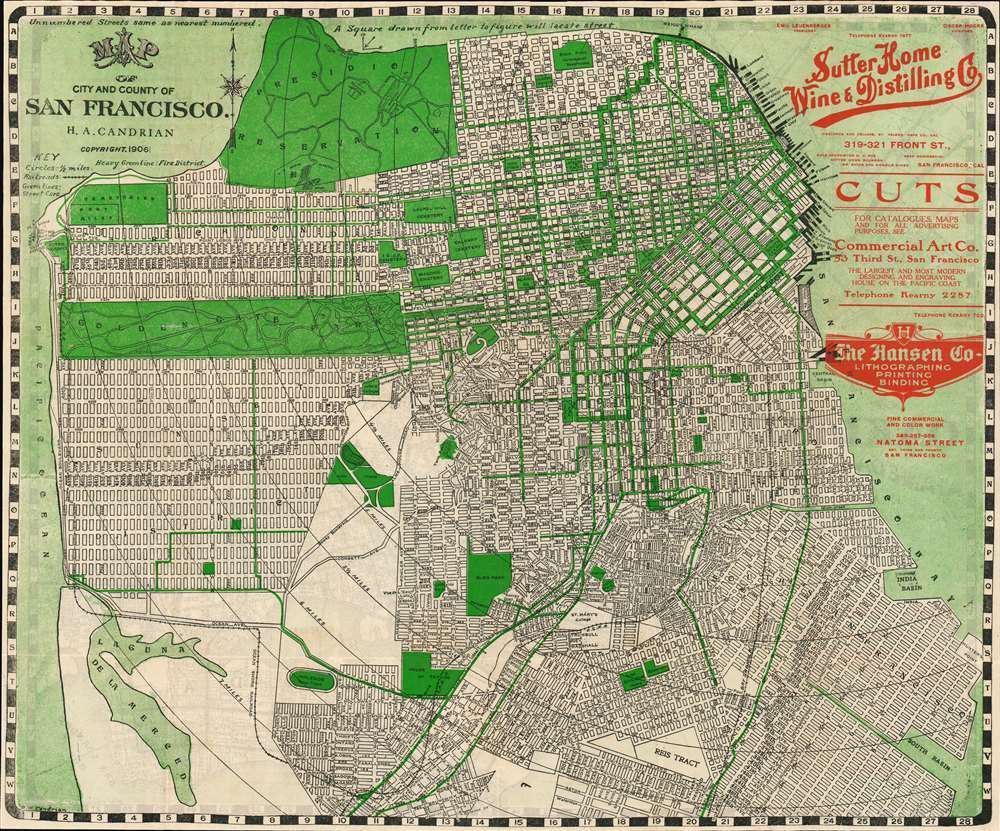 This is a 1906 Hermon Candrian city maps or plans of Oakland / Berkeley and San Francisco, California, published shortly after the disasterous 1906 San Francisco Earthquake. Depicting Berkeley, Oakland, and Alameda on one side and San Francisco on the other, green lines trace streetcar routes in all four cities. Green also highlights the University of California Berkeley, the Deaf, Dumb, and Blind Asylum, and the St. Mary's, Jewish, and Mountain View Cemeteries. The Key Route, the Southern Pacific mainline, and the Coast Line narrow gauge all cross San Francisco Bay west toward San Francisco. An advertisement for Theodore Gier Wine Company of Oakland appears in the lower-left corner. At the same time, an ad for William Knapp and Company, an importer and manufacturer's agent, occupies the upper right. In San Francisco, the Presidio Reservation, Golden Gate Park, the Alms House, and numerous parks, squares, and cemeteries are also shaded green. An advertisement for the Sutter Home Wine and Distilling Company, which still exists today, is situated in the upper right corner.

San Francisco and the 1906 Earthquake

However, the detail most of interest here is the thick green line outlining the 'Fire District' in downtown San Francisco. The 1906 San Francisco Earthquake struck on the morning of April 18. The fire soon broke out in the city and raged for several days. In the end, over eighty percent of the city was destroyed by either the earthquake or the fire, and over 3,000 people lost their lives. Estimates state that the subsequent fires caused ninety percent of all the destruction wrought by the disaster. Over thirty fires raged throughout the city over the following four days, destroying nearly 25,000 buildings and 490 city blocks. It remains the deadliest event in California's history and ranks among the worst natural disasters in American history.

Hermon Anton Candrian (March 28, 1852 - November 28, 1928), commonly publishing as H. A. Candrian, was a Swiss-American map publisher active in San Francisco in the first half of the 20th Century. Candrain was born in Bonaduz, Graubünden, Switzerland. It is unclear when he emigrated to the Untied States, but he working as an insurance agent n Seattle around 1900 and by 1905 had relocated to San Francisco. Candrian’s works focus heavily and tourist and railway guides to the city of San Francisco and the general Bay area.

Very good. Maps printed on both sides of sheet. Exhibits small repair on Oakland/Berkeley side that overlaps the cigar advertisement in the upper right corner.