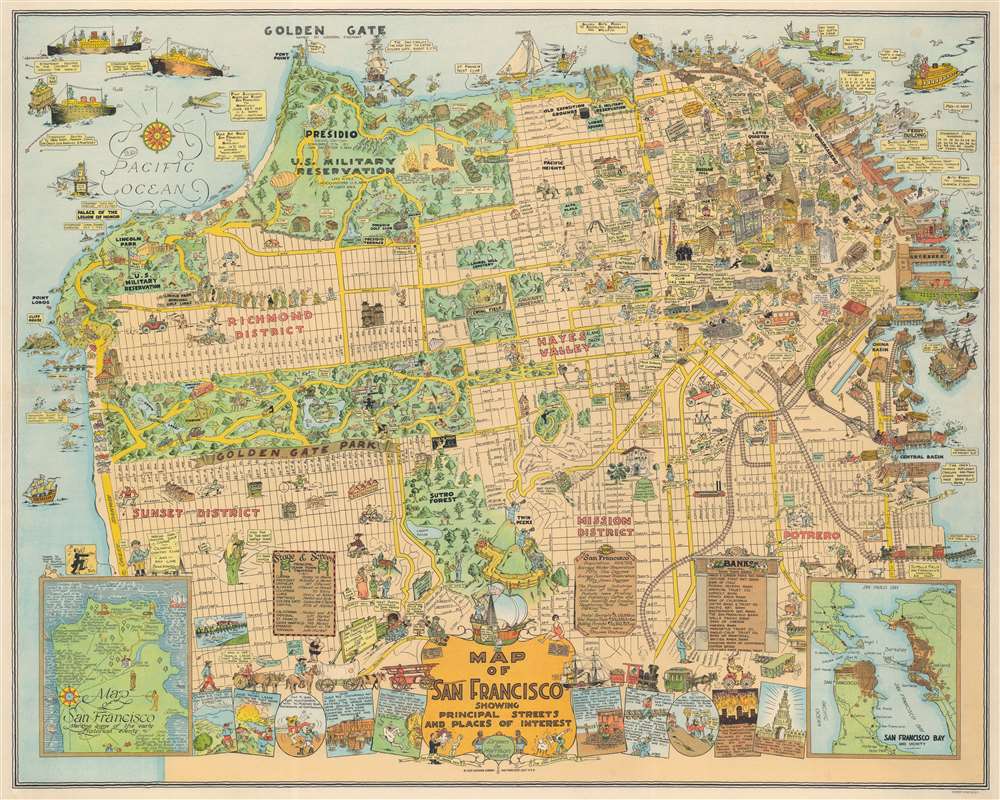 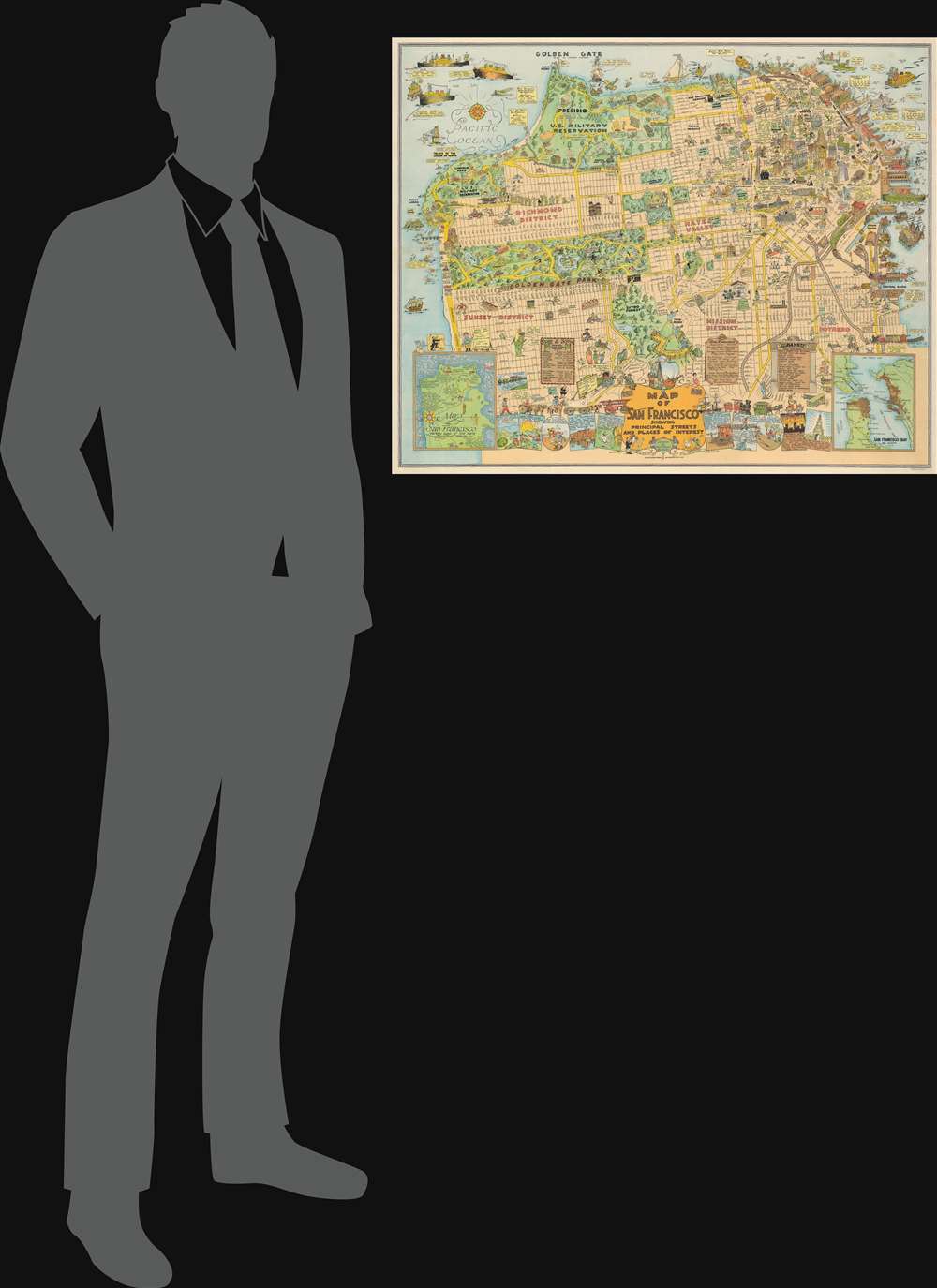 This is a 1927 Harrison Godwin pictorial map of San Francisco, California - considered the best genre illustration of that city. Comic illustrations appear alongside depictions of San Francisco landmarks, including the Fine Arts Palace, the Twin Peaks, and Fisherman's Wharf. Golden Gate Park appears in detail, with the many animal enclosures, lakes, and buildings all illustrated. The city's schools, churches, hospitals, post offices, and even the U.S. Mint (complete with workers shoveling gold coins into the back of a van) are marked. A surprising number of golfers and golf courses populate the map, with one fellow holding a sign that reads, 'San Francisco has 365 golfing days in the year'. Placards near the bottom border bear facts about the city and list its banks and theaters. Comic panels line the bottom border and present events in San Francisco's history, from its founding to its many fires. An inset in the lower left marks important events, while the inset in the lower right depicts the Greater Bay Area.

Pictorial qualities have been common in cartography from at least the 16th century, when publishers like Braun and Hogenberg incorporated view-like qualities and other pictorial elements into their famous city plans. Braun and Hogenberg, and similar cartographers, issued their town books to express, not necessarily the geography their subjects, but rather the 'essence' of the town/city. As mathematics and surveying principles became more advanced, travel increased, and the ability to translate 2 dimensional cartographic perspectives into an understanding of the actual world became commonplace, maps themselves transformed. This trend is a recognizable progression that evolved cartographic conventions from the 17th to the 19th centuries. By the late 19th century most maps had become geographical tools that illustrated the region cartographically but failed in the original raison d'être as expressed by Braun and Hogenberg, to illustrate a place's 'essence'. So, where a city map of 19th century Paris might provide a completely navigable presentation of the city, one could glean almost nothing of Paris' character from it. In the late 18th century, the first modern 'pictorial' style maps developed. These maps, like Tomas Lopez's 1788 map of Seville attempted to provide both cartographic accuracy and pictorial elements that might convey the character of the city. In that case, Lopez incorporated pictorial vignettes to illustrate important buildings and monuments. This style became increasingly commonly throughout the 19th century and early 20th centuries, particularly for centers of commerce like London, Paris, and Rome, where they are often mass produced and referred to as 'monumental' maps. The style further evolved in the early to mid-20th century, when revolutionary cartographers and illustrators like MacDonald Gill, Jo Mora, Frank Dorn, Ernest Dudley Chase, and many others, combined vignette style illustrations, modern printing techniques, inspiration from Japanese printmaking and manga, and from clever satirical cartographers/artists like Fred Rose, to produce maps that once again focused on revealing the essence a place, usually, but not always, at the sacrifice of cartographic precision.

This map was created and published by Harrison Godwin in 1927. We note four cataloged examples in OCLC, at Pennsylvania State University, Brigham Young University, the State Library of Oregon, and the California Historical Society. An example is also part of the David Rumsey Map Collection and at the La Jolla Map Museum. It has appeared on the market a half dozen times in the past fourteen years.

Harrison Godwin (1899 - 1984) was an American cartoonist and hotelier active in California during the early to middle parts of the 20th century. Harrison was a cartoonist with the Los Angeles Examiner and published two daily strips. With regard to cartographic material he published just three maps, San Francisco, Hollywood and North America, all between the years of 1927 and 1929. The San Francisco and Hollywood maps were first and second maps in a planned series of American cities, each taking some three months to complete. Curiously, no further maps in the series materialized. In addition to his cartoon work Harrison, in partnership with his brother Fred, owned Carmel's La Playa Hotel, where Harrison worked as a manager. Harrison and Fred Godwin and are credited with popularizing Carmel as a tourist destination. Little else is known of his life. Learn More...