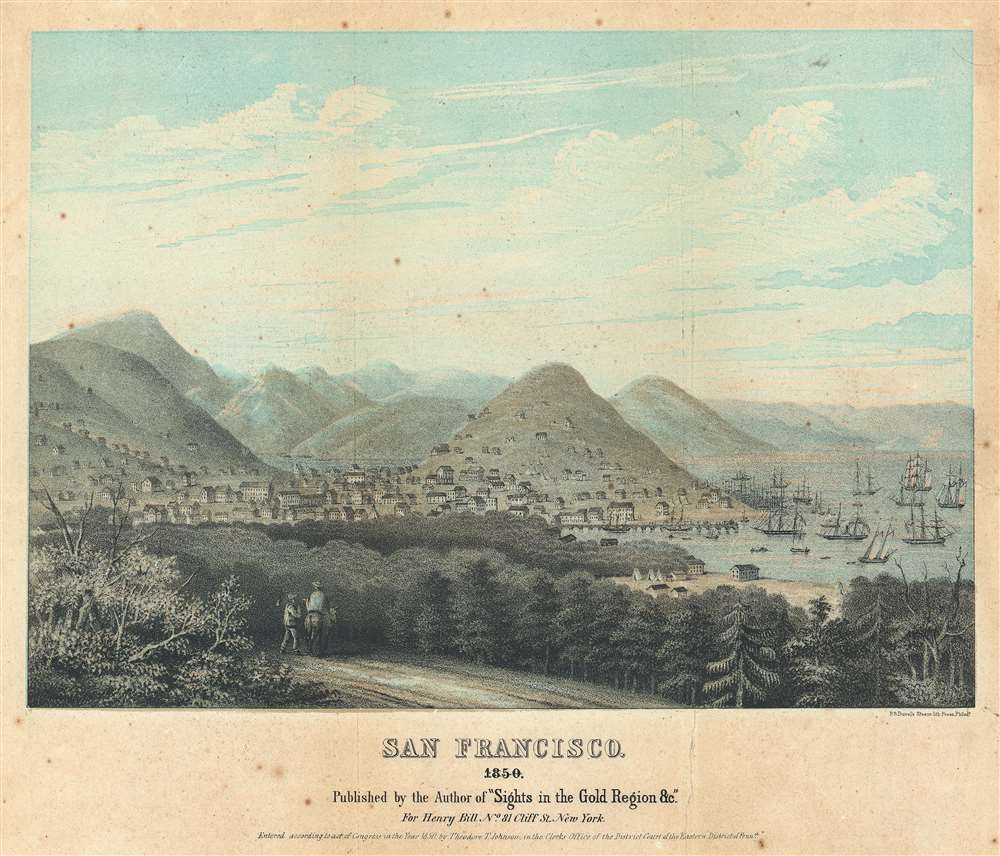 A view of San Francisco during the California Gold Rush.

This is an 1850 Theodore Taylor Johnson view of San Francisco during the California Gold Rush. Conveying at once the city's frontier reality and its burgeoning populace, the number of buildings and ships at anchor in the bay make it obvious that the city's popularity is ever-increasing. After gold was discovered at Sutter's Mill in January 1848, prospectors and fortune-seekers had been flooding into California. Here, the untamed wilderness is front and center, with two prospectors making their way back to camp illustrated in a clearing in the woods. San Francisco and its famous hills are in the background, which allows Johnson to highlight the city's newfound 'urban sprawl.' The bay, highlighted by the presence of many multi-masted ocean-going sailing ships, is also dotted by smaller boats, ferrying passengers to San Francisco.

This view was created by Theodore Taylor Johnson, engraved by Peter Duval, and published by Henry Bill in Samuel Maunder's The Treasury of History; Being a History of the World… in 1851.

Theodore Taylor Johnson (b. 1818 fl. c. 1849 - 1866) was an American travel writer. He is best known for his work Sights in the Gold Region, and Scenes by the Way, the first published book relating personal experiences in the gold fields of California.


Henry Bill (May 18, 1824 - August 14, 1891) was an American book publisher. Born in Groton (now Ledyard), Connecticut to Lucy and Burdon Bill, Henry attended the academy in Plainfield as a boy. After graduation, Bill taught in Groton and Plainfield until, at the age of twenty, a relative, James A. Bill, offered him a job in Philadelphia workin for the book publishing business he owned. Bill spend the next three years learning the publishing business and selling books door to door in the western states. Then, in 1847, Bill moved to Norwich where he opened his own publishing firm. The elder of the Harper Brothers of New York recognized his skill and gave Bill support and an unlimited line of credit. Over the following twenty-five years, Bill's publishing company produced hundreds of thousands of books and by 1865 was among the sixty wealthiest men in Norwich. When faced with failing health and the prospect of retirement, Bill converted his business into a joint-stock company, creating the Henry Bill Publishing Company, which continued to flourish for years. Bill was also involved in politics, serving as a member of the State Senate in 1853. As a member of the Democratic Party, when the party split in 1856, he chose the anti-slavery group, and became an active member of the fledgling Republican Party. Bill was also very successful with his real estate investments and was also one of the founders of Chelsea Savings Bank, serving as the bank's vice president from 1858 until 1882. Bill married Julia O. Chapman on February 10, 1847, with whom he had seven children.

Maunder, S., The Treasury of History; Being a History of the World: Comprising a General History, both Ancient and Modern, of All the Principal Nations of the Globe, Their Rise, Progress, Present Condition, Etc. (New York: Henry Bill) 1851.

Very good. Backed on archival tissue for stability. Foxing. Blank on verso.
Looking for a high-resolution scan of this?