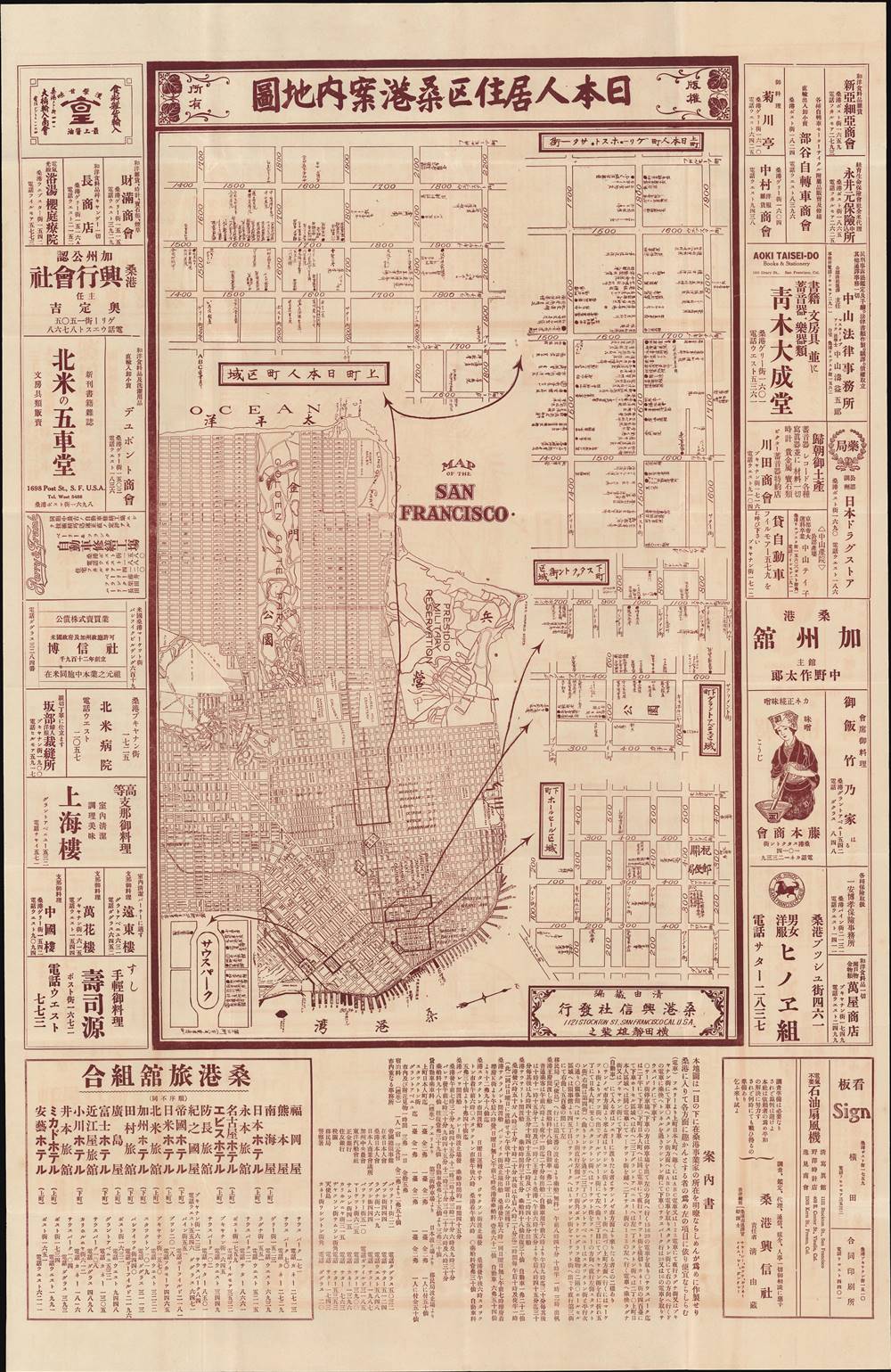 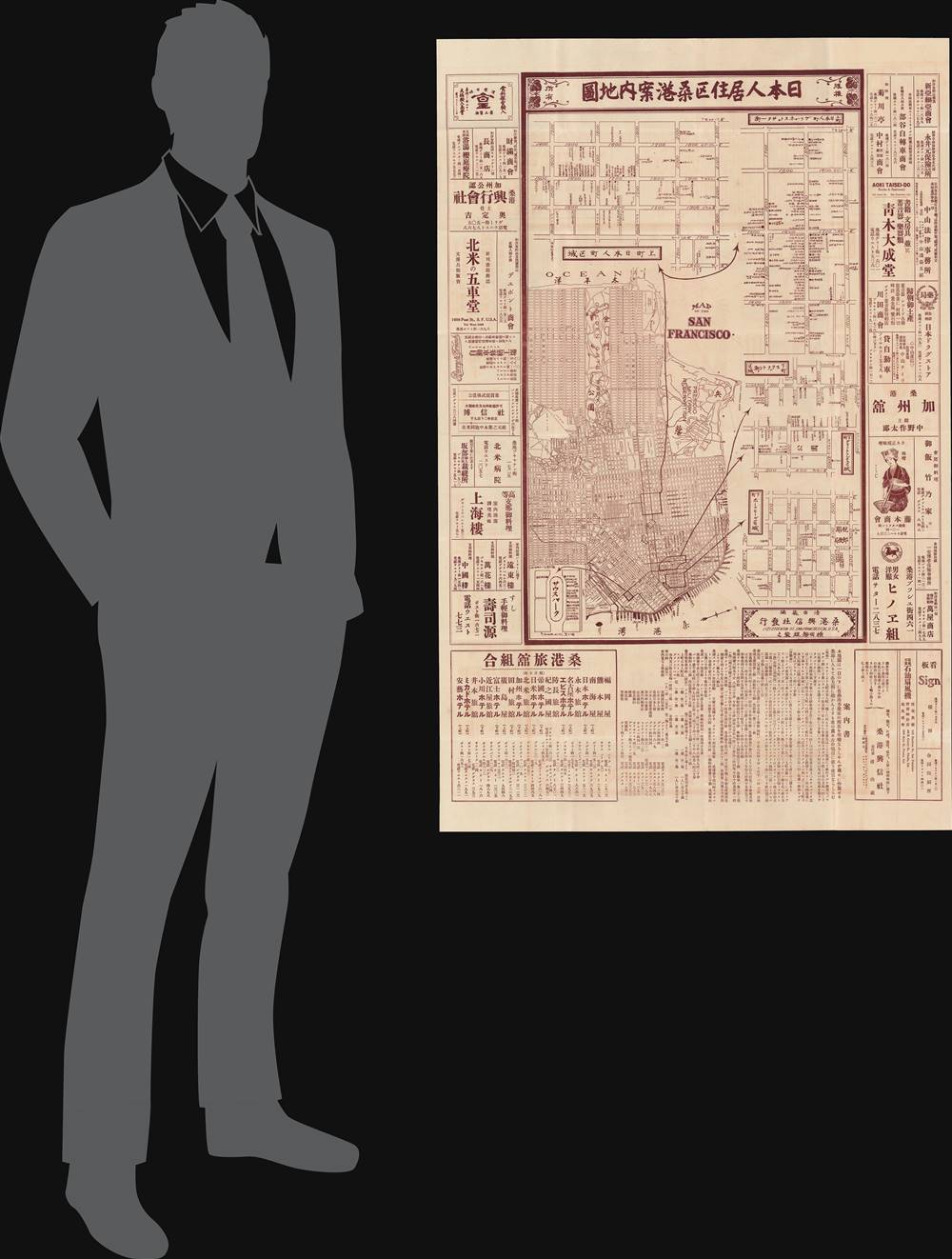 This is a unique c. 1930 Japanese-language map of San Francisco, California, published by San Francisco Koshinsha (桑港興信社), a Japanese-American printing house. It highlights the areas of the city with Japanese residents and businesses and was intended for Japanese travelers.

A Guide to the Golden City

This map is a comprehensive guide for Japanese travelers to San Francisco, including information on transportation and accommodation. The map is surrounded by advertisements for Japanese-owned businesses providing a variety of goods and services (bicycles, insurance, clothing, sushi, etc.).

Arrows from the main map point to margin insets with greater detail on neighborhoods with a significant Japanese population: Japantown, Chinatown (where Koshinsha was located), the nearby Warehouse District (between Montgomery and Davis Steets, now the Financial District, where the Japanese Consulate was and still is located), and South Park, home to hotels and guesthouses catering to Japanese travelers.

A description at bottom explains that the aim of the map is to be a convenient guide on all aspects of the city. The following sections cover the city's streetcar network and which lines to take between the various Japanese neighborhoods, automobiles and traffic (with reminders to drive on the right, rather than on the left as in Japan), the price and time of ferries to various destinations in the Bay Area, including the immigration station and detention center at Angel Island, standard rates for taxi cabs between different parts of the city, typical hotel prices, and the address and phone number of important sites (the Japanese Consulate, the Japanese-American Association, the San Francisco Japanese Association, and so on).

In 1913, California passed the Alien Land Law targeting Japanese and other Asian immigrants, prohibiting those not born in the U.S. from owning land (and dispossessing those who already did). A 1920 California law strengthened the 1913 law; both were upheld at the U.S. Supreme Court and only overturned by the California Supreme Court in the 1950s. When California's Japanese-Americans were interned during the Second World War, many lost their homes, businesses, and other property and had to restart from scratch after the war. Despite these obstacles, Japanese-Americans have made an outsize contribution to California's culture and economy, and there are still vibrant Japanese-American communities in Los Angeles, San Jose, San Francisco, and other cities.

This map likely dates from the 1920s or 1930s; several features of the map correspond with this time period, such as the mention of Angel Island as an immigration station (1910 - 1940), the lack of the Golden Gate Bridge (built 1933 - 1937), and the inclusion of 13th Avenue in the Richmond District rather than Park Presidio Blvd, and Funston Avenue which replaced it in the late 1930s. Therefore, this map likely dates from the late 1920s or early 1930s.

It was compiled by Sei Yoshikura (清由藏) of San Francisco Koshinsha (桑港興信社), which also published it. Although Koshinsha is given credit for the investigation and production of the map, there also seems to have been a degree of involvement from the Japanese Accommodation Union (桑港旅館組合), a business association of hotels and guesthouses whose members are listed at bottom-left. The Japanese Accommodation Union published a Guide to San Francisco (桑港案内) in April 1931, held by the Huntington Library (OCLC 123049768), and perhaps this map was a part of or addendum to that guide. The map itself is not known to exist in any institutional holdings and has no known history on the market.


The Japanese Accommodation Union (桑港旅館組合; fl. c. 1913 - 1940) was a business association of Japanese-owned hotels and guesthouses in San Francisco that published Japanese-language guides to the city for travelers. Learn More...