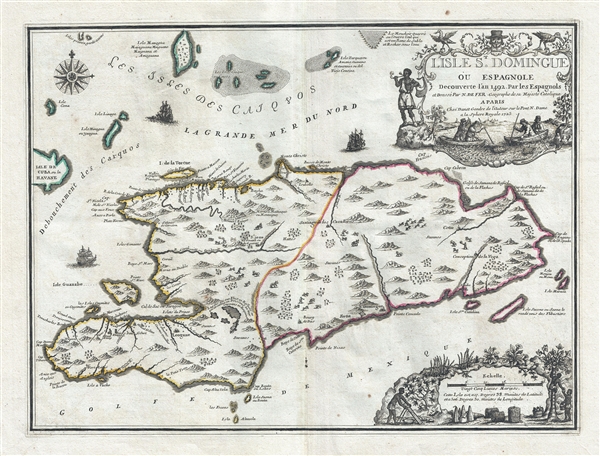 Charismatic and highly decorative map of Hispaniola or Santo Domingo.

A stunning large format example of Nicolas De Fer and Guillaume Danet's map of the island of Santo Domingo or Hispaniola. The map coves the island in full as well as parts of adjacent Cuba and Turks and Caicos. The island is shown with colored boundaries derived from the 1697 Treaty of Ryswick dividing the island into the western French portion (modern Haiti) and the larger eastern lands of Spain (Dominican Republic). Topography is drawn in profile according to De Fer's idiosyncratic style.

There are two elaborate cartouches both depicting local people, flora, and fauna – no doubt intended to illustrate the wealth and abundance of the island. The upper cartouche shows two boats in shallow waters spearing sea turtles and is surmounted by a Spanish-looking gentleman with a dashing brimmed hat. The cartouche in the lower right illustrates islanders picking fruit and harvesting.

This map appeared in a later edition of Nicolas De Fer's Atlas ou Recueil de Cartes Geographiques. Although the atlas was first published in 1709, this map did not appear until 1723, when, the atlas was taken over by De Fer's son-in-law, Guillaume Danet. The was both included with published versions of the atlas and sold separately, to be tipped into older editions and other composite atlases.


Guillaume Danet (1670 – 1732) was a Paris based French bookseller and map publisher active in the late 17th and early 18th century. Danet married Marguerite-Geneviève De Fer becoming the son-in-law of the cartographer and map publisher Nicolas De Fer (1626 – 1720). Along with his brothers and brothers-in-law, Jacques-François Bénard (Besnard) Danet (husband of Marie-Anne De Fer and engraver to the King of Spain) and Remi Richer (an engraver who sold portion of the De Fer business to his brothers in 1721), Guillaume Danet inherited a portion Nicolas De Fer's publishing business in 1720. Both Danet and Bénard used the De Fer name and signage concurrently. Danet maintained a book and map shop on the Pont Notre-Dame. After Danet's own death in 1732, the business was continued by his widow, Marguerite-Geneviève, until about 1746. Marguerite-Geneviève died in 1746 after which many of the De Fer / Danet plates were acquired by Louis Charles Desnos. Learn More...

De Fer, N., Atlas ou recüeil de cartes geographiques, dressées sur les nouvelles observations de Mrs de l'Academie Royale des Sciences, (Paris, De Fer) 1723.     The Atlas ou Recueil de Cartes Geographiques was published by Nicolas De Fer from 1709 until about 1729. It was a composite atlas and as such no two examples are identical. Customers would instead order the atlas assembled from whichever De Fer maps they found most interesting. On De Fer's death in 1720 the publication of his maps was taken over by Guillaume Danet (De Fer's brother in law) and his brother Jacques-Francois Danet, who continued to publish the atlas until about 1739.