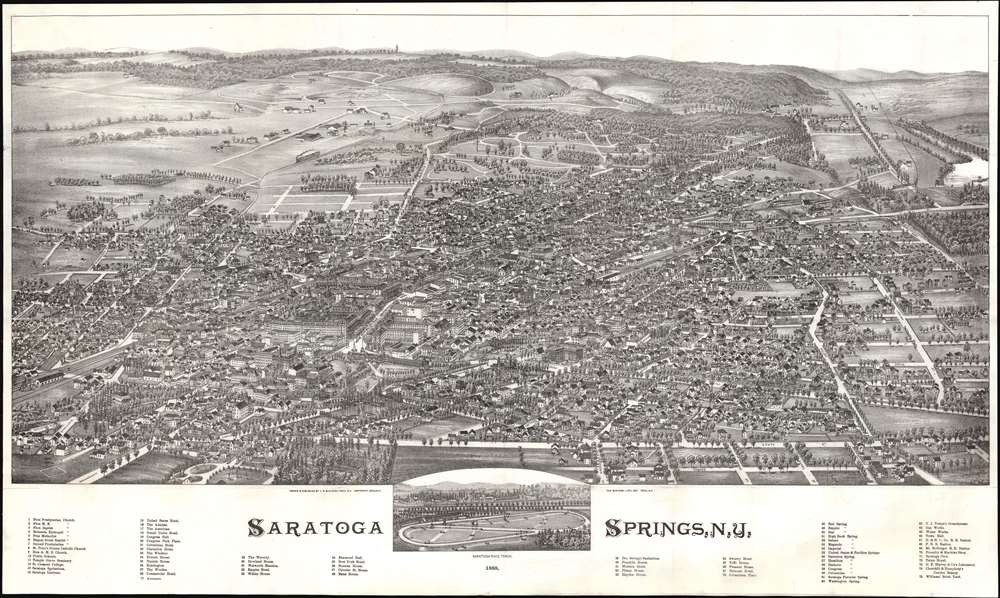 A striking 1888 Lucien Rinaldo Burleigh bird's-eye view of the spa town of Saratoga Springs, New York. The view looks northward on Saratoga Springs from a high point just south of town. Although the famous racetrack, built in 1863, is beyond the scope of the view, it is featured via a special inset at bottom center. Some 75 locations are numerically keyed at the bottom of the map, with entries 48 - 62 identifying 14 of the city's namesake mineral springs. The view further emphasizes Saratoga Springs' ample access to railroad networks, providing easy access from New York, Boston, and Albany, as well as a plethora of grand hotels for the spa-going elite. The Saratoga Sanitarium, once a refuge for tuberculous patients, now a creepy abandoned building, the subject of any number of 'ghost hunts', is identified.

Saratoga Springs was established in 1819 from the western portion of Saratoga, becoming an incorporated village in 1826. In 1832, the then Saratoga and Schenectady Railroad reached Saratoga Springs, giving it easy access to Albany and, later, New York. With the rise of the American tuberculosis epidemic in the 19th century, doctors began calling for European style sanitariums. Saratoga Springs, with its clean Adirondack air, healing mineral springs, and easy access to major cities, was developed as a spa and healing center. Resort hotels, spas, and other facilities developed to accommodate an inrush of tourists and patients suffering from the 'white plague'. Grand Hotels included the United States, and the Grand Union, in its day the world's largest hotel. In 1863, the Saratoga Racecourse opened. Horse racing capitalized on the existing tourism infrastructure and added gambling to the city's attractions. In 1870, the Delaware and Hudson Canal Company began running the Empire State Express, creating a directly connection between New York City and the increasingly popular resort town. Today, although the sanitarium has long fallen into ruin, the city remains a center for horse racing, spa activities, and the arts.

The vogue for bird's-eye city views lasted from about 1845 to 1920, during which period some 2,400 cities were thus portrayed, some multiple times. Although views were produced in many urban centers, the nexus of view production in the United States was Milwaukee, Wisconsin. The major American viewmakers were Stoner, Wellge, Bailey, Fowler, Hill, Ruger, Koch, Burleigh, Norris, and Morse, among others

This view was published by Lucien R. Burleigh in Troy, New York. The view was simultaneously issued in at least two states. The present 1-plate state, and a 2-plate chromolithograph variant. The present view is likely the earlier of the two, issued while the second plate, used to introduce clouds, was in progress. We have identified no other examples of this 1-plate edition, but 2-plate examples are noted in the Library of Congress, the Clements Library at the University of Michigan, the New York State Library, and at the Saratoga Springs Public Library. Scarce to the market.

Library of Congress, G3804.S3A3 1888 .B8. Saratoga Room, Saratoga Springs Public Library. Reps, John, Views and Viewmakers of Urban America, (University of Missouri, Columbia, 1984), #2881.
Looking for a high-resolution scan of this?