1719 Michelot-Brémond Chart of the Island of Sardinia 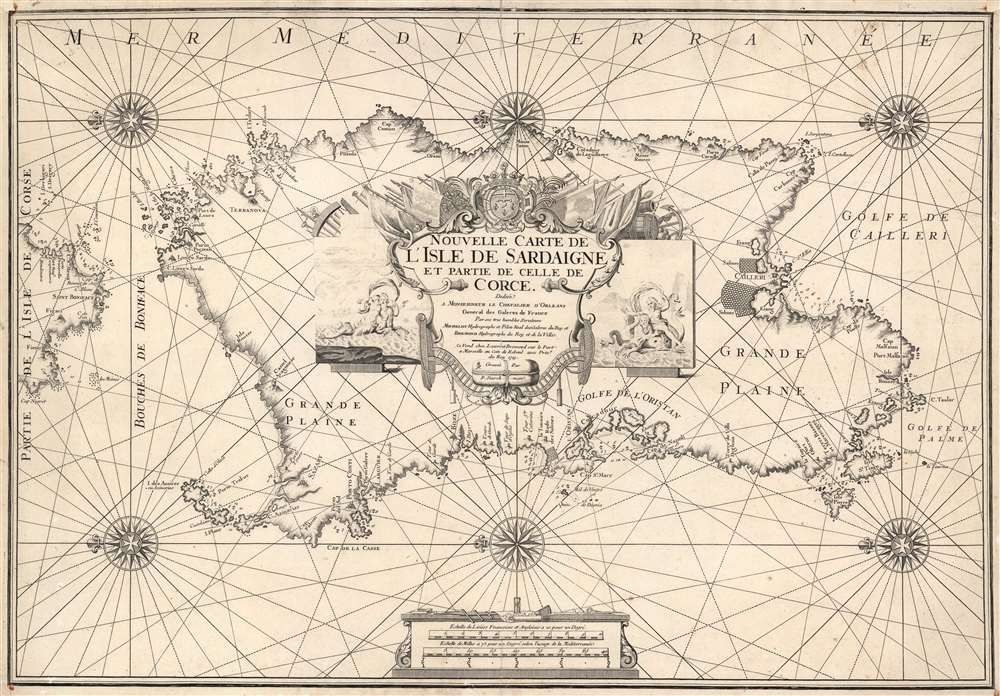 1719 Michelot-Brémond Chart of the Island of Sardinia

This is a rare and beautiful 1719 Henri Michelot nautical map of the island of Sardinia, Italy. Michelot was active in the Mediterranean Sea for many years, and his charts benefit from his expertise in those waters - making them among the finest available at the time of publication. Accordingly, coastal features are abundantly named, depth soundings are marked for the island's anchorages, and coastal landmarks such as towers and hills are indicated pictorially. The famous salt flats of Cagliari and the Oristano lagoon are marked as well.

The chart is beautifully executed, as is typical of the engraver, Pieter Starckman. Sea areas are embellished with rhumb lines and six compass roses. Coastal topography is indicated by hachure, and delicately shaded stippling marks shallows. Cities appear pictorially. The scales, given in French and English leagues and in miles, are shown as if on a table with navigational tools. The cartouche is very grand, flanked by frolicking mermen and mermaids, and decorated with coiled plumb lines, armaments, and flags. It is surmounted with the arms of the Duke of Orleans (with the bar sinister, a reference to the illegitimacy of the dedicatee.)

The chart is dedicated to the Chevalier d'Orleans, General of the French Galleys - this was Jean Philippe (1702 - 1748), the illegitimate son of Philippe d'Orléans (nephew and son-in-law of Louis XIV, and regent after the King's death). Jean Philippe was named Général des Galères in 1716, at the time just fourteen, so he was likely initially a figurehead. Later, he was wounded in the 1744 Battle on the Rhine, and by 1746, actively commanded the fleet. At the time this chart was dedicated, the sixteen-year-old Jean Philippe was being groomed for the Knights of Malta, which would have prevented him from marrying: his father did not wish his illegitimate progeny to extend their lines. He became an Abbott of the monastic order and undertook several diplomatic missions on behalf of his cousin, King Louis XV. Despite his religious orders, Jean Philippe produced a daughter - Amable Angélique de Villars, born in 1723 to Amable-Gabrielle de Villars, wife of Honoré-Armand de Villares, 2e duc de Villars (by whom she had no issue).

This rare chart was engraved by Pieter Starckman an printed by Laurent Brémond in Marseille in 1719. It was issued for inclusion in Nouvelle Carte Generalle de la Mer Mediterranée par Michelot et Bremond, a bound set of fifteen harbor charts of the Mediterranean as well as a complete chart of that sea. The full volume is listed only in the collection of the Jefferson Public Library in Birmingham. The separate map is cataloged only by the Universitats und Landesbibliothek Darm, the National Library of Wales, and the Biblioteca Nacional de Espana. Scarce to the market.

Henri Michelot (fl.1700-1730) was a French cartographer and hydrographer of the late 17th and early 18th century, styled 'Hydrographer and Royal Pilot of the King's Galleys.' Virtually nothing is known of his education or life. He was nevertheless credited with several influential cartographic works devoted to the Mediterranean, and appears to have been based in Marseilles, which was the home port of the French Galley Corps between the 1680s and the 1740s. His works exhibit long experience and close association with the Mediterranean coasts and harbors he charted and are prized for both their detail and the baroque, bellicose imagery that decorated them. His output includes charts of the Mediterranean co-authored with Nicolas Therin, and he collaborated with the similarly obscure Laurent Brémond, both on separate charts and the 1718 Ports et Rades de la Mer Méditerranée. Despite the paucity of information on the man, he was sufficiently esteemed that printed works continued to be attributed to him well into the early 19th century. Learn More...


Laurent Brémond (fl.1700-1730) was a French hydrographer and map printer of the late 17th and early 18th century, styled 'Hydrographer to the King and the town,' the town in question being Marseilles, the port city in which his shop was located. His education and life are obscure. He was credited with several influential cartographic works devoted to the Mediterranean, and was associated with Henri Michelot, hydrographer and Royal navigator for the French Galley Corps. Their works exhibit long experience and understanding of the Mediterranean coasts and harbors they charted. Their charts, particularly the larger, broader-focused ones, featured baroque, bellicose imagery that emphasized French naval power. In addition to several fine, large charts of Corsica and Sardinia, Brémond and Michelot produced the 1718 Ports et Rades de la Mer Méditerranée, which would be reprinted several times. Learn More...


Pieter Starckman (fl. c. 1680 - 1730), a.k.a Peter or Petrus, was a Dutch engraver active in the late 17th and early 18th centuries. Starckman was likely born in Amsterdam in March of 1655, the son of Steven Starckman and Atalijntge van Oostijnen. During much of his career he was active in the Hague, but some records suggested that in the early 18th century he held a royal appoint in France as Graveur du Roy en Geograpie, Fortifications et Marines. Starckman engraved for numerous cartographers as well as on his own account, usually signing his work as 'P. Starckman'. He collaborated with the finest mapmakers of his day, including De Fer and De L'Isle. Learn More...

Good. Some small wormholes, mended at top and bottom of centerfold. Marginal mends at top corners, with some ms. reinstatement of border.