1875 Beers Map or Plan of Saugerties 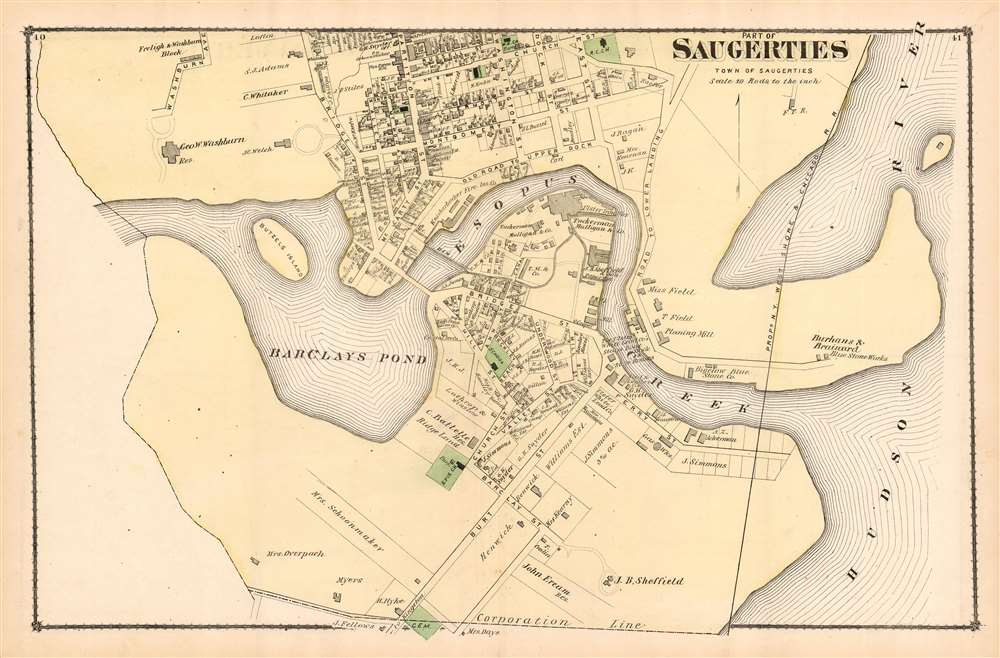 1875 Beers Map or Plan of Saugerties

An attractive and interesting F. W. Beers plan or map of Part of Saugerties, from his 1875 County Atlas of Ulster, New York. The close scale of the plan reveals not only streets and plots of land, but also individual structures, many of which still exist. Municipal structures and the town's industries are shown as well. The Saugerties Lighthouse is marked and named. The plan focuses specifically on the southern part of the village, on the shores of Barclays Pond and Esopus Creek. It extends as far north as Church Street (now Post Street) and Russell Street. The proposed route of the New York, West Shore and Chicago Railroad is shown - cutting off the waterfront - although the Railroad only existed between 1870 and 1877 and does not appear to have been actually constructed.

This plan was included in Beers' 1875 County atlas of Ulster, New York : from recent and actual surveys and records . The atlas is well represented in institutional collections, but this plan is not cataloged separately in OCLC.

Frederick William Beers (August 17, 1839 - September 8, 1933) was an American map publisher, cartographer, and surveyor. Beers was born in Maryland, the son of map publisher James Botsford Beers (October 16, 1811 - June 3, 1901), but lived much of his life in New York where he was the chief of the map division and Commissioner of Public Records in Brooklyn. He joined the family business in 1870 and along with his father, published the Farm Line Atlas of the County of Kings and the Atlas of Long Island. He is credited with personally mapping every county in New York State. Frederick worked with his family into the mapmaking trade, including his brother, Charles Henry Beers (November 3, 1813 - March 5, 1892), and nephews Silas Norman Beers (September 3, 1837 - May 12, 1873) and Daniel Glover Beers (October 19, 1841 - February 12, 1913). He retired from the publishing business in 1930, when he was more than 90 years old. He died on September 8, 1933 in Bridgeport, Connecticut. Learn More...