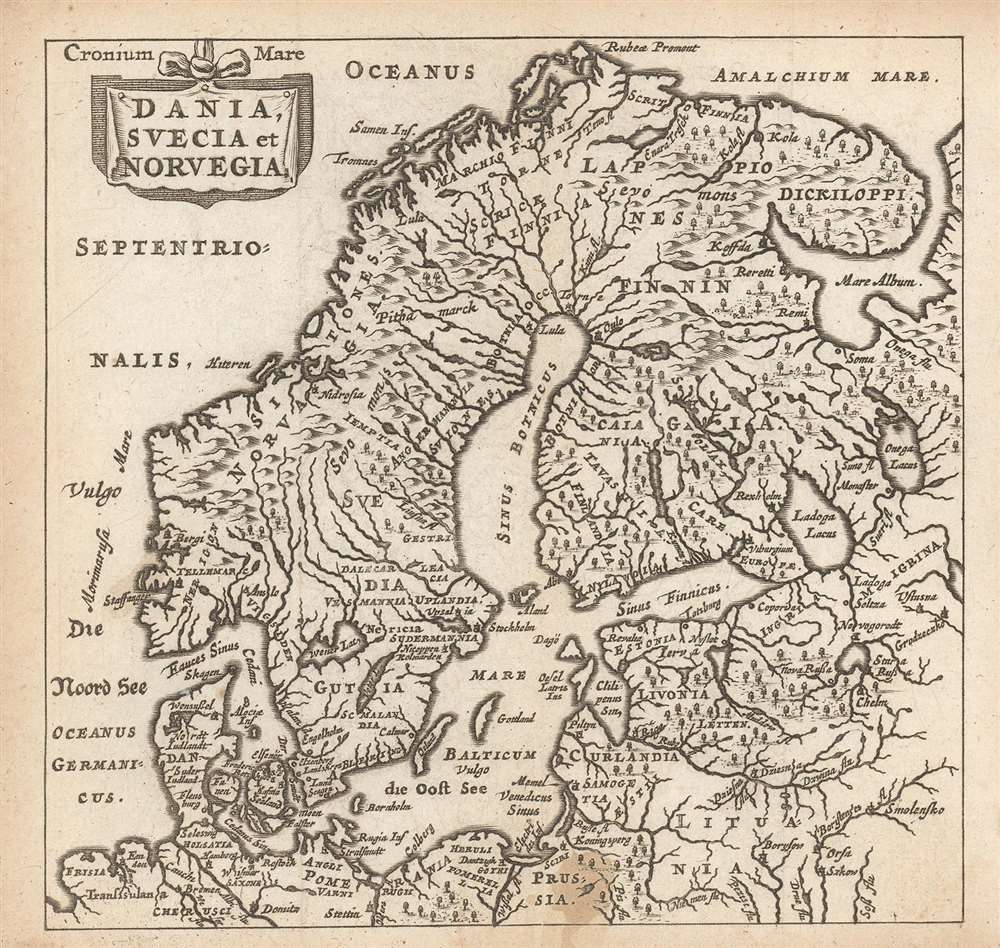 Attractively Engraved Map of the Northern Part of Europe.

This is a finely-engraved miniature map of Scandinavia, printed in a 1661 Elzevir edition of Philipp Cluver's introduction to geography, appearing in editions produced by many different houses, and with maps of wildly differing characteristics. This map follows the model of Swedish mathematician and cartographer Anders Bure, whose 1624 map of Scandinavia - the first geodetically correct map of the region - provided the basis for virtually every general map of the region, including those by Goos, Hondius, and Blaeu, from whose work this one is almost certainly derived.

None of the maps appearing in the Elzevir edition of Cluver's Introductionis in universam geographiam are signed by an engraver. For a miniature map, this is not unusual - very often this work was executed by journeyman engravers, who would not have the right to apply their imprint to the work. However, it is very possible that the matriarch of the Elzevir firm - Eva van Alphen - did this work herself. She is known to have been an accomplished engraver, having been credited with a beautiful Dutch Bible map after Visscher (Orbis Terrarum Tabula Recens Emendata et in Lucem Edita per N. Visscher). At the time that their edition of Cluver was produced, Eva's husband Jean was in failing health and upon his 1661 death she took over the direction of the firm. The excellent work here may well be hers.

The map was engraved for inclusion in Philipp Cluver's Introductionis in universam geographiam. Though he did not live to see it in print, Cluver's text would be one of the most popular of the seventeenth century, which was printed in many editions starting in 1624 but continuing well into the 18th century. This example appeared in a 1661 edition of the book, published by the house of Elzevir.

Anders Bure (August 14, 1571 - February 4, 1646) was a Swedish mathematician and cartographer. He is considered the father of Swedish cartography. He was the son of the parish priest Engelbertus Laurentii and Elisabeth Andersdotter Burea, descendant of the long-established Bureätten family. His immediate family included diplomats and government officials. His education is obscure, though he is mentioned as an office clerk in 1602. His duties in the following years involved recording royal genealogical and historical works, involving him in the highest echelons of Swedish society. He also participated in diplomatic assignments, including missions to both Russia and Finland. His cartographic contributions improved the mapping both of the northern parts of Sweden, and the kingdom as a whole. His six-sheet 1626 Orbis Arctoi represented the first real improvement to the mapping of the northern parts of Europe since the Olaus Magnus map of the previous century: this map would provide the basis for virtually every European map of Scandinavia to follow in the 17th century. In addition to these achievements, he was the first person recorded to use the decimal system in Sweden. Learn More...