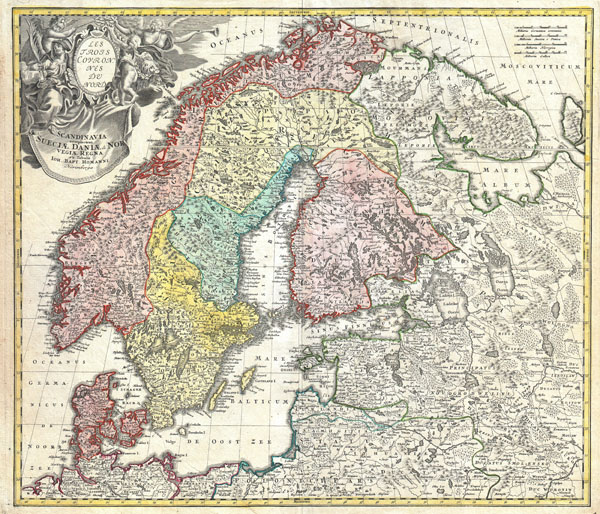 A beautifully detailed c. 1730 J. B. Homann map of Scandinavia. Depicts both Denmark, Norway, Sweden, Finland and the Baltic states of Livonia, Latvia and Curlandia. The map notes fortified cities, villages, roads, bridges, forests, castles and topography. The elaborate title cartouche in the upper left quadrant features angels supporting a title curtain and a medallion supporting an alternative title in French, Les Trois Covronnes du Nord. Printed in Nuremburg. This map must have been engraved before 1715 when Homann was appointed Geographer to the King.  The map does not have the 'cum privilegio'  (with privilege; i.e. copyright authority given by the Emperor) as part of the title, however it was included in the c. 1750 Homann Heirs Maior Atlas Scholasticus ex Triginta Sex Generalibus et Specialibus…. as well as in Homann's Grosser Atlas.