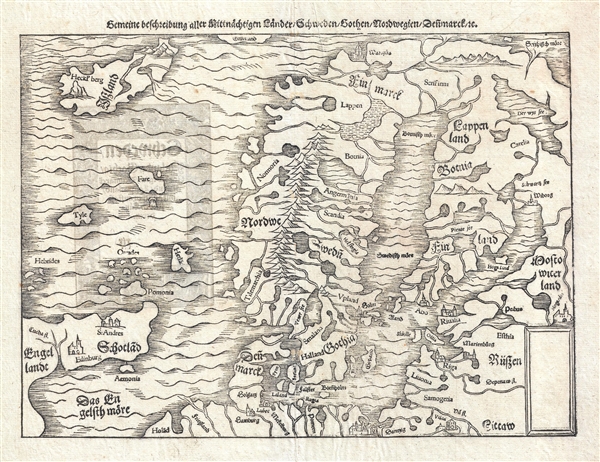 An Uncommon 1574 Sebastian Munster Woodcut Map Of Scandinavia. The Map Covers Scandinavia From Iceland To Germany And From Edinburgh, Scotland, To (Roughly) The Modern Day Russian Border. It Includes The Modern Day Nations Of Norway, Sweden, Finland, Denmark, Iceland, Scotland, Latvia And Estonia, As Well As Both The Baltic Sea And The North Sea. This Is Munster's Second Woodcut Of Scandinavia. Cartographically It Is Based Upon The Carta Marina Of Olaus Magnus. It Was Issued In The German Edition Of Munster's Cosmographey Oder Beschreibung Aller Länder. It Was Published In Basel By Heinrich Petri.