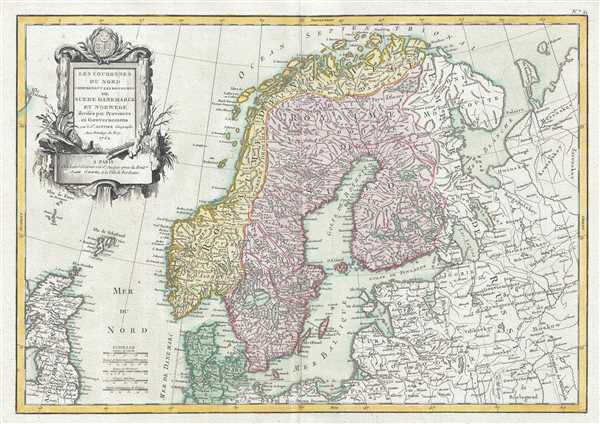 This is a beautiful example of Jean Janvier's 1762 decorative map of Scandinavia. The map depicts the region from Iceland and England eastward as far as Moscow, north to the Arctic Sea, and south as far as Denmark and Germany and includes the modern-day nations of Sweden, Denmark, Norway, and Finland. Towns, cities, rivers, mountains, and some undersea features are identified.

Of particular interest is the legendary Lofoten Maelstrom (Mael-Stroom) in northwestern Norway. This legendary whirlpool was the inspiration for Edgar Allen Poe's classic tale 'Descent into the Maelstrom'. In reality, it is a periodic and powerful current caused by tidal variations in the region.

A large decorative title cartouche is situated in the upper left corner of the map. This map was drawn by Jean Janvier and included as plate no. 21 in the first edition of Jean Lattre's 1762 issue of the Atlas Moderne.