1854 Spruner Map of Scandinavia and Poland before Reformation 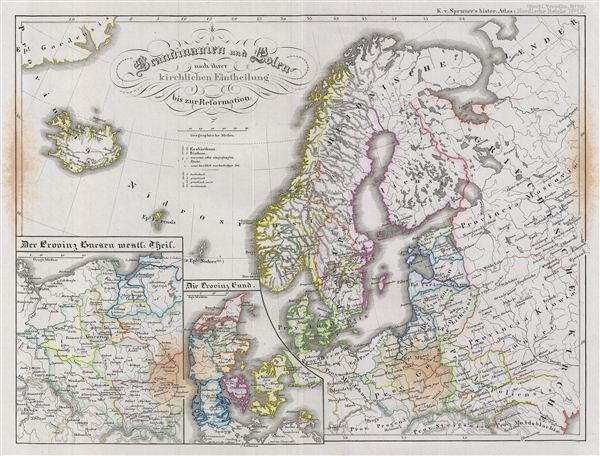 1854 Spruner Map of Scandinavia and Poland before Reformation

This is a fascinating example of the Karl von Spruner's 1854 historical map of Scandinavia and Poland until its reformation. The map covers all of Scandinavia including Finland south as far as Poland. Two inset maps in the bottom left quadrant detail the western part of the province of Gniezno and the province of Lund. The map depicts Scandinavia when, during the 1520s, The Ninety-Five These of Martin Luther reached Holstein and Denmark. Lutheran protestors gained widespread support and in 1536, Christian III, King of Denmark, made Lutheranism official in Denmark-Norway. Meanwhile in Poland, the teachings of John Calvin and Huldrych Zwingli were gaining popularity. As a whole the map labels important cities, rivers, mountain ranges and other minor topographical detail. Political and regional boundaries are outlined in color. Relief is shown by hachures, and the whole is rendered in finely engraved detail exhibiting throughout the fine craftsmanship for which the Perthes firm is best known. Prepared by Karl Spruner for publication as plate N IX in the second edition of Justus Perthes' 1854 Historisch-geographischer Hand-Atlas zur Geschichte der Staaten europa's vom Anfang des Mittelalters bis auf die Neueste Zeit.