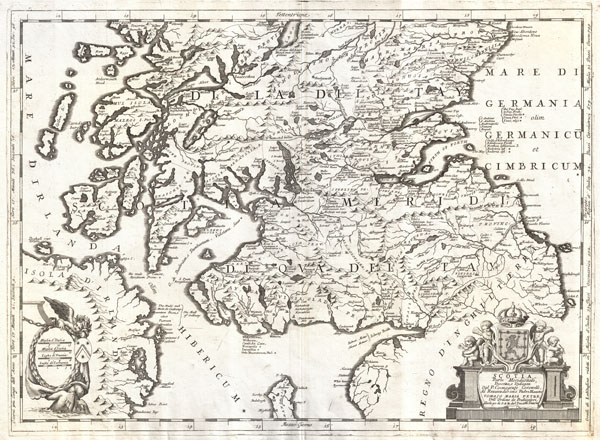 Outstanding map of southern Scotland, including Edinburgh and Glasgow.
$1,000.00

This is Vincenzo Maria Coronelli's 1690 map of southern Scotland. Covers the southern part of Scotland from New Aberdone and Kiltre south as far as the Isle of Man, including adjacent parts of England and Ireland. The major cities of Glasgow and Edinburgh, among many others, are identified. As a whole this is a splendid example of Coronelli's distinctive style at its finest, with detailed engraving, historical notes, armorial vignettes, and an baroque title cartouche complete with a pedestal, the Scotch royal crest, and four Cherubim. Published for inclusion in Coronelli's stupendous 1690 Atlante Veneto.

Very good. Some scuffing to covers, contents exhibit occasional wormholing. Binding tight.
Looking for a high-resolution scan of this?